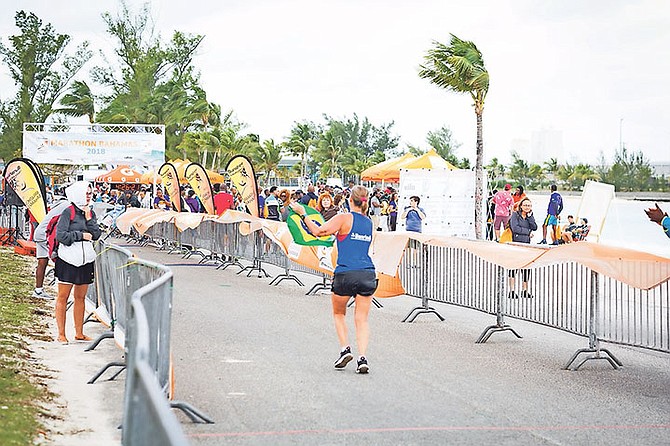 The overall winner of the full marathon, first to cross the finish line at Arawak Cay, was David Kilgore in two hours, 32 minutes and 44 seconds.

The 26-year-old Florida native now living in New Hampshire, said despite the conditions, it was a welcome change to run in this environment coming from the frigid temperatures back home.

“It was great, I tried to take it out a little easier but it didn’t work too well in that aspect but it was great, everything was really beautiful, I went over the bridge at first and got out to the leaders of the half marathon and I was pretty much cruising by myself after that for much of the race.

“It was a gorgeous course along the water, even though on the way back the wind was a little strong, but you can’t complain when you’re in the Bahamas right?,” he said.

“The wind at the end was probably the most brutal part I thought. Coming around a corner with a strong wind in your face is tough but it’s kind of nice too I guess to cool you off a little bit.

“I was just listening to music and enjoying the scenery around for the most part.

“The tough point came around mile 16 or 17 but I just slowed down a bit to get my wind back but back at around 23, I got my wind back.”

Kilgore is set to compete in the Miami Marathon on January 29, but said he plans to return to defend his title at the 10th edition of Marathon Bahamas in 2019.

Poirier, who finished in 3:44:40, said she was impressed with her entire experience in the Bahamas and plans to return to compete in the near future.

“I was so happy to finish and to win because over the last eight miles I wanted to walk so badly, but I just kept running,” she said.

“It was difficult with a lot of wind, but the experience was so beautiful and the people are so nice, everything was very good.

“I wasn’t exactly thrilled with my time but it was a tough year with the weather, the wind and going across the two bridges.

“Last week I ran in -28 degrees Celsius so this was still a nice change.”

The first Bahamian to cross the finish line in the full marathon was 40-year-old Delroy Boothe, who also was the top finisher in the Male Masters in 3:11:41.

Williams, 34, who recently completed a training course in Kapsabet Kenya, took the event in 1:14:07 secs.

Florencia Morales of Argentina returned to take the top overall spot among females in the half-marathon.

“It was so windy. It wasn’t my best time but because of these conditions and this wind, but I think did well,” she said, “I always try to do my best, try not to start to fast, try not to look at my watch so I dont freakout if I have to slow down and I try to take it one mile at a time.”

A wide cross-section of local participants take part in the marathon relay.

In the female division, Team Run Dat!…Powere by Keys Bahams Realty finished first in a time of 4:03:00 secs and The Flamingoes were second in 4:03.01 secs,

One of the highlights of Marathon Bahamas is traditionally the High School Relays segment.

“I want to encourage our Bahamian people to begin to think of the possibility that Marathon Bahamas has the potential to be increasingly seen as the best marathon experience in the world. Im not saying the largest because there are global cities that we will never be able to compete with the numbers like New York, Paris and London, but ‘m not talking about numbers I’m talking about the experience that the participants can see, feel and touch,” he said, “Where else in the world do you run and see a course that compares to this course? Where else can you run that course in the middle of January? Where do you get the hospitality anywhere comparable to the hospitality you get in the Bahamas? It doesn’t happen. When you finish running this marathon you go on the beach. Where else does that happen? This year we added live music and people are dancing. People didn’t think they would be able to walk after the marathon but they are dancing on the beach. That is what we are talking about when we talk about this experience.”

At Bay Street, the course continued to the west, hugging the northern shores of Cable Beach, Delaporte and West Bay Street with the turnaround ¼-mile west of Compass Point returning to the most eastern entrance to Arawak Cay for the oceanfront finish.

As for the relay, the exchange zones and distances: leg 1 – 6.2 miles - start in front of McDonalds, Downtown; leg 2 – 6.9 miles - McDonalds to east of Sun Fun Resort (in front of the ‘castle-type’ oceanfront house –green/white); leg 3 – 5.6 miles - East of Sun Fun Resort to turnaround point (west of Compass Point) to Cave’s Height and leg 4 – 7.5 miles - Cave’s Height to Arawak Cay.

Race Weekend began with the hosting of the Susan Koman 5K run/walk, which started at Montagu Beach and finish east of the old Paradise Island bridge adjacent to the Police Station.

“Sunshine Insurance has been doing this since 2010 and it began the initiative we started because we obviously care about the public’s health,” Shelly Wilson - Sunshine Insurance Vice President said at previous editions of the marathon, “Recognising the challenge that cancer presents in the Bahamas, we started this initiative to raise education and awareness as it relates to cancer. The Susan G Komen Bahamas Race for the Cure specifically addresses breast cancer, however Marathon Bahamas raises funds for many other charities beyond breast cancer. Really our focus has been on creating that awareness and changing the lifestyles of Bahamians. It is an annual event, not only to raise money for the beneficiaries but also to bring attention to the dreaded disease that affect so many of our Bahamian people.”