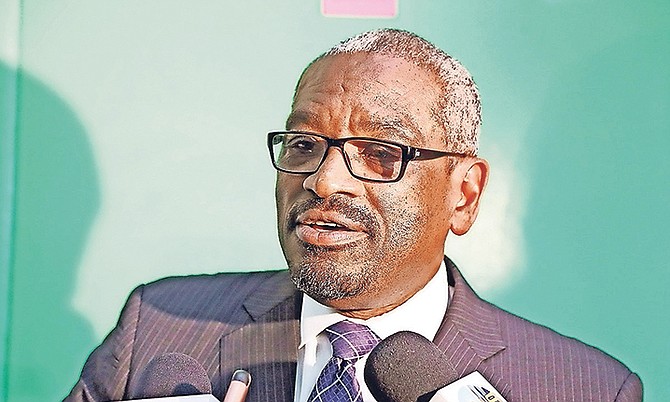 THE Bahamas will not sign onto the CARICOM Single Market and Economy despite historic steps taken by the region at last week's summit, according to Prime Minister Dr Hubert Minnis.

Dr Minnis made it clear at a Saturday press briefing the country did not move to adopt the Protocol on Contingent Rights which provides a framework for the free movement of skilled labourers and their families between member states.

Dr Minnis said: "I want to say clearly so that you understand in spite of what you may read in the newspaper, we have discussed Caribbean Single Market and Economy (CSME). The Bahamas is not and will not be a part of CSME. The Bahamas will not allow free movement of people within our boundaries so we are not a part of CSME. That must be clear, so you do not feel that because of what has happened there, that Caribbean nationals would be able to move into the Bahamas quite readily.

"We have our rules, our laws and they will continue to apply so we are not and will not be a part of CSME."

A review of CSME's operation and a bid to accelerate its full implementation among CARICOM member states was one of the key issues addressed at the 39th CARICOM Heads of Government conference in Jamaica last week.

He made the announcement in that country's Parliament as he tabled a report from the CARICOM commission, chaired by Jamaica's former Prime Minister Bruce Golding, which listed recommendations to improve the group's function.

According to news reports, several CARICOM member states at last week's meeting suggested time was running out for full implementation.

Last week, CSME member states also adopted the Procedures on the Refusal of Entry of Community Nationals, according to a CARICOM release, along with a harmonised form to be used by Immigration when refusing entry.

The release stated member states were also urged to implement the Procedures on the Refusal of Entry of Community Nationals by August 1.

A special meeting on the CSME was agreed to be held in Trinidad and Tobago in November.

The Bahamas is the only full member that has not joined the CSME as Haiti is a partial participant, and Montserrat - a British Overseas Territory - is a signatory.

The CSME was conceived as an integrated development strategy that began as the Caribbean Free Trade Agreement, which was formed in 1965 and dissolved in 1973.

Brent Symonette, minister of financial services, trade and industry and immigration, recently revealed to Tribune Business that the government is targeting 2019 to complete its accession process to the World Trade Organisation (WTO).

Under WTO, factors like the extent to which foreign labour can enter the Bahamas, and in which industries, will likely depend on this nation's negotiators and the WTO accession terms.

Meanwhile on the matter of hurricane preparedness and disaster management, Dr Minnis said he told CARICOM members he was disappointed at the level of funding for the Caribbean Disaster Emergency Management Agency (CDEMA) -- its inter-governmental agency for disaster management.

"I told CARICOM point blank at the meeting," Dr Minnis said, "I'm disappointed that CDEMA has not been funded as much as it should be. They are only funding CDEMA about $1.2 million, and I told CARICOM members that those who have not paid up must pay up, and we must increase funding.

"We got a perfect lesson during the last hurricane when America was quite engaged with Puerto Rico and dealing with matters of its own nature, and the other territories were dealing with matters also, which meant that CARICOM nations had to come, galvanise, come together and help themselves and each other.

"So the message that has come out there," he said, "is that we cannot always depend on others. We must be able to mobilise our team, our forces, and try to help ourselves."

This has always been the Bahamas' historic position as largely so, it's not in our interests for freedom of movement. We aren't all that competitive already and our job market is wonky. It can be argued that it's not in our best interests. I do however think free trade (goods and services) with the region is a good thing for us and everyone. But nope.

Of course, there has to be a balance. No country with a small land mass wants to be overrun by foreigners. But remember......Smaller countries cannot go up to the world powers and organizations, by themselves and get anything done. Why wouldn't your country want a common market to trade goods and services at concessionary rates and relieved tariffs?

because we are xenophobic and anti free trade. We aren't even in the WTO and most Bahamians think the WTO is the illuminati. I am pro free trade and movement of LEGAL SKILLED LABOUR, but Haiti's atrocious situation and our proximity to them has clearly had an impact pn our PM's decision making. Minnis isn't the smartest fellow either, but I'm not surprised.

Free movement of labour....to da Bahamas an island nation of some 350,000 population....an surrounded by other Caricom members whose population rrange from da closest Haiti..11 million pop...Jamaica..others wid millions more.....we are not only talking free movement of labour ....but accompanying families assets capital???.......but being recolonised......what are our benefits from being in CARICOM.......?.???...........we are not like Germany ...able to absorb 1.4 million persons since 2015 and look at the challenges dey face....

it is regrettable that no one can believe anything that comes out of the mouth of the PM of the Bahamas. If his mouth is open he is telling lies.

Unsurprisingly though, we now even see the race card being played in an effort to legalize marijuana use. This is all about the Jamaican government and Jamaican people (i.e. CARICOM) sucking hoards of cash out of the Bahamas in exchange for an illegal crop that grows in abundance at very low cost in Jamaica. And we thought we had things tough with all of the cash being sucked out of the Bahamas by illegal Haitian and illegal Jamaican immigrants sending cash back to their family members in their home better. Our most stupid dimwitted PM is about to allow the Bahamas to be made a fool of by the Jamaican government and he doesn't have any idea whatsoever that he has become the laughing stock of the Caribbean region. What a joke!

I has wonder how many comrades among 91,409 voting 35 red shirts candidates 10th May, 2017 - are well on their way feel uneasy with the thought how prime minister can easily end up turning Bahamaland, into a Colony of Jamaica... and they really thought it might very well become a lil Haiti.... For a PM travelling to Jamaica with a delegation "40" warm bodies - only now claiming have said No, No to Caricom, why take along 40 for ride?

common sense is not common when it comes to doc and his FNM Government was it necessary to take 14 or 15 people to Jamaica just to say NO. The Bahamian people will pay the bill with the 12 % VAT, Dumb and dangerous runs a muck. And he talks about corruption.

@birdiestrachan Every village has an idiot, plz don't carry that title for the rest of your life. That was not the only thing discussed at Caricom. Everyone else on this topic has made a sensible contribution except you. You still vex from 2017 aye? Get over it!

Just this morning I called on phone left message my former high comrade school classmate in science to get back me to guide me get better grip on what goes with this science trained prime minister......stay tuned.

I don't know what is best, but I've been to Jamaica more than once and their economy is a lot better than the Bahama's. I'm not trying to be offensive, it's just true. They have a industrial economy and tourism. Their tourism is booming. Countless oceanfront resorts, mostly all inclusive. Seems to be extremely popular among the tourists. The Jamaican's seem happy your there. They grow the best coffee I've ever had. Construction and road's repairs are common place. It's happy and flourishing environment. Unfortunately the Bahamas seem depressed economically and emotionally drained. You have to be able to see the light at the end of the tunnel. I don't know what the answer is, but I wish something would create change for the positive for everyone.

Jamaica had paid a high price for its present perceived "boom" .......... We do not want to go down that road .... that Barbados finds itself on right now.

You cannot compare the agro/industrial base of Jamaica and The Bahamas ...... we have developed along two very different cultural and historical timelines

Single Market and Economy? The Bahamas is already awash and overrun by expat workers to the tune of over $1B in repatriations annually!

WTO will finish destroying and taking away what little we have left.