Wildcats Rout The Panthers 22-0 In Npsa 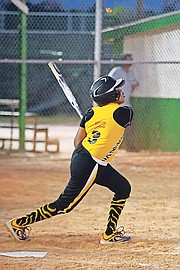 THE defending champions Sunshine Auto Wildcats, playing their third game in three consecutive nights, saved their best performance for the last as they whitewashed the Hennessy Panthers 22-0 in the New Providence Softball Association's double header in the Banker's Field at the Baillou Hills Sporting Complex on Saturday.

The performance came after the Wildcats got nipped 4-3 by runners-up Johnson's Lady Truckers on Thursday night and, in a make-up on Friday, they avenged the loss by holding off the youthful Platinum Lady Sharks 9-6.

In the men's feature contest on Friday, the Commando Security Truckers knocked off the Chances Mighty Mitts 9-1 to make up for their embarrassing 25-0 blowout loss to the defending champions C&S Hitmen on Thursday.

Veteran Linda Knowles proved that she can still throw the ball, tossing a one-hitter with two strike outs and walking three to get her third victory in as many starts this season for Sunshine Auto in just three innings of play as the game was stopped by the mercy rule.

"I feel good. I am just trying to get back in shape so I can help these young girls and let them know I still got the ball," Knowles said. "The ball is still in my court. I just have to stay in shape and I know when I'm needed, I can come out and deliver."

With the team they have this year and the way they are gelling, Knowles said despite having lost just one game so far, the Wildcats will be the team to beat this year.

"Expect for us to win the pennant and the championships," she said.

Taylor Cartwright was the winning pitcher for the Lady Sharks, who came up with six runs in the first inning, four in the second and two more in the fifth in the abbreviated victory.

The Lady Warriors got all three of their runs in the fourth.

Left fielder Vandette Smith was 2-for-3 with a run scored to lead BTC.

Johnson was the winning pitcher, giving up six hits with seven strike outs.

Center fielder Darniesha Woodside was 2-for-4 with two runs scored and shortstop Aliyah Johnson was 1-for-4 with a run scored.

Sari Albury was the losing pitcher.

Truckers 7, Mighty Mitts 1: Winning pitcher Eugene Pratt, in helping his cause, blasted a solo homer to lead of a two-run third inning to secure the win for the Commando Security on Friday.

Anthony Bowleg, Diego Hutchinson, Shaquille Williams, Lamar Walkins, Peran Rolle and Winston Seymour all scored a run as the Truckers rolled to one in the second, one in the third, three in the fourth, one in the fifth and one in the sixth.

Steffan McKenzie had a two-out walk and eventually scored the only run for Chances.

Travis Smith was the losing pitcher.

Lady Truckers 4, Wildcats 3: Valencia Gibson got the win on the mound and Johnson's catcher Shavette Taylor went 1-for-2 with a RBI to help in their victory on Thursday.

Hitmen 25, Truckers 0: Alcott Forbes pitched a no-hitter with six strike outs and he helped his own cause offensively by going 3-for-5 with a double, driving in two runs and scoring four times.

C&S produced seven runs in the first, four in the second and 14 in the third for their abbreviated massacre.

Dwayne Dean was tagged with the loss.

Here's a look at the team standings