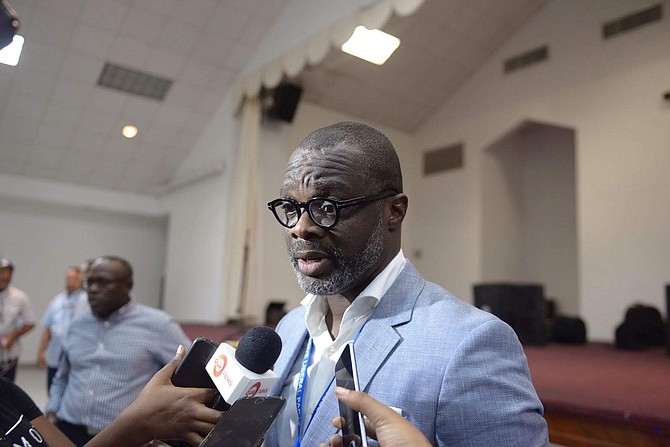 A CODE of conduct and rules governing how candidates receive campaign finances are features of the Progressive Liberal Party’s constitutional overhaul, a move party officials say signals the organisation’s transition into reform.

This reform will ensure transparency, accountability and honesty, according to Raynard Rigby, PLP Constitutional Committee chairman.

The rules are also changing when it comes to the selection and appointment of PLP stalwart councillors. PLPs want a set number of councillors to be appointed yearly with the assurance there is balance to this process.

Even the process by which election candidates are chosen will change to more of a primary type system used in the United States where hopefuls would need to be elected by those in the constituency and then ratified by the National General Council.

Presently the Candidates Committee, which is comprised of the leader, deputy, chairman, secretary general and 15 others selected by the chairman after consultation with the leader, make up this committee. They have the authority to review and select a candidate, which is then approved by the NGC.

According to Mr Rigby, this is the first time in 65 years a code of conduct is being enshrined into party law. He said officials were also aiming to expand the party’s base and “democratise” the organisation.

It seems the party not only wants to improve public perception, but wants to appear sensitive to the concerns of the public and its supporters.

The last time any amendments were approved for the PLP’s constitution was in 2005 during the organisations 49th national convention.

“This is the first time ever that any political organisation in the Bahamas has enshrined a code of conduct in their constitution,” Mr Rigby said on the sidelines of the party’s one-day special constitutional convention at Trinity Activity Centre in Stapledon Gardens on Saturday.

“We are breaking new ground in that regard in the PLP. What it would mean is it deals with and addresses how party members should deal with each other, members of the public, finance reform, issues of how a Cabinet minister should conduct the affairs of his portfolio in relation to donations and fundraising activities in these constituencies. It’s really to ensure that there is accountability, transparency and honesty in the public profile of our members.

“It is probably the most comprehensive approach to campaign finance reform in a political party. We provide for accountability in terms of how a candidate or member would receive donations (and) engage in fundraising activities etc, etc,” he also said, when asked by The Tribune if the changes would incorporate campaign financing.

When it comes to stalwart councillors, Mr Rigby said officials took into consideration the concerns of supporters.

Concerns in this regard have surfaced from time to time from well-known PLPs, including Leslie Miller and Alfred Sears.

In January 2017, just days before the party began its three-day convention, Mr Miller lamented that by appointing hundreds of stalwarts, it was an act of “overkill” towards Mr Sears, former attorney general, who at the time sought to dethrone then leader, former Prime Minister Perry Christie. Mr Miller said he did not think it was fair that as many as 300 councillors, according to one report, had been added.

Mr Sears went on to later file a formal complaint to the party’s trustees over the issues and called into question the integrity of the party’s electoral process.

In this regard Mr Rigby said: “We have changed the use of the power and selection and appointment of the stalwarts (that) has been carried out in the past.

“What you will now have is based on the feedback from this convention the majority of voters and members wanted a system where the party identified a specified amount of stalwarts to be appointed per year and the National General Council will exercise that power to ensure that there is balance in the party and so all times in the appointment of new stalwarts the council will have to ensure that there is a balancing exercise being carried out from delegates from the constituency level and delegates at the stalwart councillor level.”

However, it is unclear when these changes will be made public.

This is because the committee will have to go back and factor in all of the proposed changes, Mr Rigby said. Once this is complete the changes must again face the scrutiny of those in the party.

The session was suspended to a date to be later announced.

They need to change the stalwart councilors and get rid of every old corruption tainted PLP (which would be all of them) and then they may have a chance! No sensible Bahamian would vote for Brave!

LOL at the PLP having a code of conduct. Maybe this memo didn’t reach people like Fitzgerald who begged for Bahamar contracts after a year in office.

And what about their financial disclosures as required by law, eh?

Any word on whether candidates for Party positions will be ALLOWED TO SPEAK at Party Conventions?

Notice how none of that is handled by these new "rules" and even if it were proposed...would it take effect prior to this year's vote - which would allow Sears to speak this time?

PLP and corruption is one and the same. It's in their genes,so no matter how much window dressing is attempted it will be one and the same. Futhermore change is supposed to come with Brave and Freddie at the helm and Bradley and Perry in the background? Is this the joke of the year?

This party has little to no chance of getting a single vote from any Bahamian who is not a PLP minion. . .they are gone forever. . .never to rise again. . .EXTINCT!!!

At least it's a step in the right direction. If they want to effect change and convince the Bahamian people that they have changed course, this is a good start.

Mr. Rigby made recommendations years ago when he was chairman. He gave a good assessment of where the PLP needed to be. It fell on deaf ears, hopefully this time around they would do better.

I am not a fan of the party but we do need a good opposition in order bring a balance to Parliament. We all loose when there is no strong opposition.

With Brave Davis as leader???? No way Hosea. . . bad behavior gone deep deep deep in that party. . .they are a criminal enterprise. . . that horse need to be shot. . .the injury is too deep and pervasive. . .they are USELESS AS HUMAN GOVERNMENT. . .their same old goings on show that they are useless when it come to behaving as decent persons!!

They have got to be kidding--Once a crook, always a crook!!

Purge your party of all the old folks over fifty. Let Chester take over as leader. Let mellennial's take over every position in the party going forward. including all the nominations for the next elections.....Right thinking Bahamians dont easily forget. ....thats the only way you can right the PLP ship.and pray for a fighting chance.

Another relic pops out of the cobwebs and spouts b/s. An ex-chairman wannabe FINISHED hopeful.

That party needs to go away all together. They had their time since 67 and screwed the country. I hope the punch is right plenty of these no good ****suckers need to go to jail.

We have seen this dog and pony show before ..... Do not be deceived Bahamians!!!! Can the PLP change its spots while any Pingdomite is alive???

The PLP has 4 MPs and 4 Senators .......... Brave, Perswell, GHM, Fweddy and DocDarville have NO political credibility as they are all connected with past corrupt Perry governments ...... Cooper, the fisherman and the pooh bear lawyer ain't much of a Next Generation crop to choose from.......... But it is a sad reflection on the lack of succession planning and feeble leadership since the fall of SLOP in 1992 .............. That is why the FNM is a stronger party now.