TWO pedestrians were killed in separate accidents early Monday morning, one of which was a hit-and-run incident.

These fatalities bring the total number of traffic related deaths since Friday up to five.

On Monday, Chief Superintendent Craig Stubbs, officer-in-charge of the Traffic Division, told The Tribune there have been 50 traffic fatalities for the year.

CSP called this a “definite” increase as it is “basically the total” for all of last year.

According to Royal Bahamas Police Force crime statistics, 54 people died as a result of traffic accidents in 2017 and 44 died in 2016.

Monday’s accidents occurred within a minute of each other along Carmichael Road.

According to CSP Stubbs, the first incident happened at 2.40 am on Carmichael and Gladstone Roads.

“A male pedestrian was struck by a vehicle that fled the scene,” he said.

The victim was taken to the hospital in critical condition. He later died.

CSP Stubbs said police have no leads on the driver as yet, and made a plea to the public for assistance.

“Anybody who may have seen a vehicle that was in that area at the time… give us a call at Police Traffic (Division) or call 919 and give us the information,” he requested.

The second incident took place at 2.41am on Carmichael Road in the area of Popeyes.

He said a man who had just left a liquor store, walked onto Carmichael Road where he was struck by a vehicle.

“That vehicle remained on scene, and the driver is assisting with the investigation.”

That pedestrian was also taken to Princess Margaret Hospital where he was listed in critical condition before ultimately dying.

While the victims’ identities were not released up to press time, CSP Stubbs described them both as adults, and approximately in their early 30s and late 40s respectively.

Monday’s deaths came after a weekend spate of traffic accidents.

Approximately seven hours before, around 9.27pm on Sunday night, a male nurse was killed on the Western road at the entrance to Mount Pleasant Village.

“Two adult males (were) travelling north (on) the southwestern road, when they apparently would have lost control of their vehicle and hit a Poinciana tree located on the western side of the thoroughfare,” CSP Stubbs said.

“From the poinciana tree they went into a concrete wall that was holding a sign for Mount Pleasant Village. The male driver received some injuries on his shoulder. He was transported to PMH (in) stable (condition)… The passenger died on scene.” 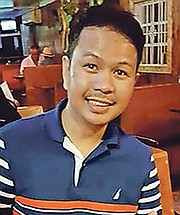 Nurse Jeffrey Layosa died in a car crash on Sunday night at Western Road at the entrance of Mount Pleasant Village.

CSP Stubbs identified the deceased as Jeffrey Luna Layosa, 35. A native of the Philippines, Layosa was employed as an Accident and Emergency nurse at PMH.

The driver, Santiago Galicia, is also from the Philippines and a nurse at PMH.

A colleague of the nurses, Patricia Laing, said last night: “I pray for peace and comfort for their families as well as the A&E family. I pray for courage to face the days ahead. Jeffrey was special to us and his death has left a vacuum. We deeply mourn his passing. I pray for a speedy recovery of Nurse Santiago.”

Shortly before 10pm on Saturday, a female pedestrian was killed after attempting to walk across Prince Charles Drive. She was struck by two cars, whose drivers both remained on scene.

On Friday morning at 9am, 18-year-old Achintya Garikaparthi died after being involved in a three-car collision on the Western Road near Mount Pleasant Village.

With two fatal accidents occurring in a three-day span on that south Western Road strip, this newspaper asked CSP Stubbs if officials are investigating whether there is an engineering issue with the street.

“No,” CSP Stubbs said. “I think based on what we’ve seen so far… Both drivers would have made some manoeuvre, whether it was being distracted in their vehicle, or driving under the influence.”

These “critical errors”, he said, contributed to the accidents.

In view of these tragic events, CSP Stubbs made an appeal to the public, asking road users to limit distractions such as using cell phones or eating while driving. He also warned against drinking and driving and asked motorists to be mindful of pedestrians, especially late at night.

CSP Stubbs also described the practice of fleeing the scene of an accident as “inhumane”.

“If you’re involved in an accident and you feel like you may be in an area (that causes you to) fear for your own safety, we ask you to go to the nearest police station right away, and report the accident.

“The officer will then take you back to the scene, where an investigation will be conducted, and we will determine who is at fault for the accident. It is wrong to (strike) somebody down in the road, in the thoroughfare, and leave the scene, and fail to come to the police to report the matter. It is wrong and inhumane.”

Former Transport Minister Glenys Hanna Martin on Monday described traffic fatalities as a “global health issue” and one of the “major causes of death” in the Bahamas.

Mrs Hanna Martin told The Tribune that engineering, education, and enforcement are three of the major components to be considered when addressing this issue.

“Engineering is, you…investigate whether there is something about the road that is lending itself to putting people at risk when they drive it. And that deals with things like potholes…lighting, (etc),” she said.

“The other thing is education, which is really the key. Even more than enforcement. Because enforcement is important, and it has to be upheld. But you can’t be everywhere all the time.

“And that is where education comes in. And I think that that is probably the most critical component. And I think you have to start with the young children in primary school, you have to take it into the junior high and into the senior high school; and then, of course, the public at large.”

Mrs Hanna Martin underscored that she was not speaking specifically to any of the factors which might have caused the recent spate of accidents.

However, she regretted the rising cases of such deaths in the country, and particularly the number of young people killed.

“In a lot of countries, a National Road Safety Committee is formed,” she added. “One was formed when I was there. I know it’s probably in place.”

She noted that the world over, the recommendation is that the prime minister chair that committee.

While admitting that this was not the case during her tenure, Mrs Hanna Martin said it has been found that the prime minister’s involvement helps to “raise the awareness of the serious erosion this is having on our human capital.”

people walking around in the n ight should wear some reflective clothing at least.