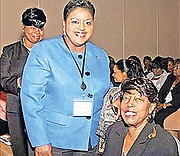 Strachan, also a past president of the Straw Vendors Association, was remembered as an activist and mentor.

“I have learned with deep sadness of the death of our stalwart councillor, civic activist, friend, member and supporter of the progressive cause Telator Strachan,” said PLP leader Philip Davis.

“A giant of a lady has passed on. I remember her as a quiet but determined presence in our council meetings and in planning sessions. She always brought reason but a fierce determination to any cause which the party advanced.

“In her own right, she was a leader in the Straw Market. This was part of a significant group of activists in the support of the progressive cause. She was one of the late Sir Lynden Pindling’s armour bearers. Whenever there was an issue in the market for decades, you could count on Telator Strachan to lead the charge and to settle the issues. You could count her to voice the concerns and to mobilise toward solutions. She was a good woman.

“She brought her talents to the Women’s Branch of our party and was widely admired by women from across the country. Her leadership skills were unquestioned,” Mr Davis added. “. . . She passed her unquestioned leadership skills on to her children. Most notably, she passed those talents on to her daughter Melanie Griffin who followed in her mother’s footsteps first as a senator and then as a member of Parliament.”

Englerston MP Glenys Hanna Martin said Strachan was a “giant” of a woman.

“She was a gifted artisan having spent her life in the world famous Straw Market,” Mrs Hanna Martin posted to Facebook. “She was a most excellent ambassador for our country in her interactions with visitors from far and wide many of whom she struck up true and lasting friendships. She was ahead of her time. She was among the first women to rush on Bay St breaking a gender and cultural barrier. She was brilliant and articulate, ethical and wise and incredibly decent.

“She was a leader and an advocate for the freedom philosophy of the Progressive Liberal Party, a political warrior. She caught the eye of the late PM Pindling who understood her worth to our national development and appointed her to the Senate. She was one of our nation’s great matriarchs. Authentic, hard-working and old school in her values. She was a wonderful mother and raised wonderful children including my colleague and sister Melanie Griffin. I am grateful that our paths crossed: she was for me a mentor, a rock solid support and a guiding voice.”

She had been in hospital several weeks ago before being released to convalesce at home.