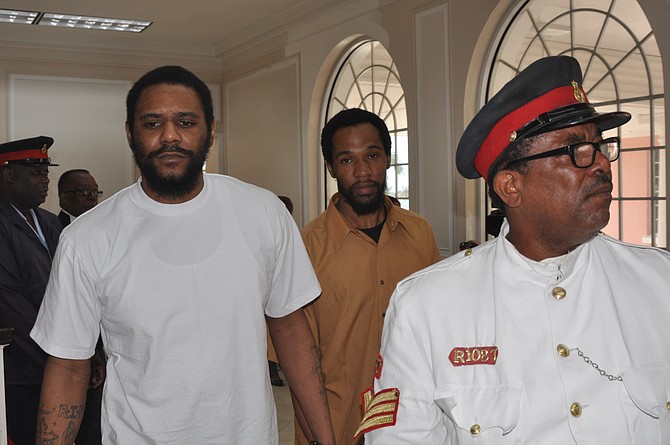 Paul Belizaire was sentenced to 25 years imprisonment for the armed robbery of Barry and Sheena Johnson on Thursday in the Supreme Court in Grand Bahama.

Justice Estelle Gray-Evans delivered her ruling around 3.45pm during a sentencing hearing following arguments submitted by the Crown and the defence.

On May 10, a jury found Belizaire guilty in an 11-1 decision of armed robbery, but the jury was hung and could not reach verdicts on the two murder counts.  Sentencing for the armed robbery conviction was set down for May 31.

During the proceedings, Crown prosecutor Erica Kemp told the court that Belizaire is "a danger to society", and suggested that the court uses its discretion to deter others from committing such an egregious crime that had resulted in the "heinous killing" of two people.

However, Geoffrey Farquharson argued that his client tried to save the victims by "putting his life on the line" trying to prevent their deaths and that should be taken into account.

Barry and Sheena Johnson were shot to death at their residence in Deadman’s Reef on the evening of September 12, 2015, by four masked men armed with firearms. The couple was robbed of their GMC truck and a set of keys valued at $8,000.

Belizaire, and co-accused Devaughn ‘Short Man’ Hall, and Kevin Dames were on trial for the murders and armed robbery.

After a nine-month trial, Hall was found guilty on all three counts. The jury failed to reach verdicts on any of the charges against Dames, who gave the men a ride to Deadman’s Reef on the night of the murders.

Belizaire, 31, declined a probationary report before his sentencing.

She indicated that Belizaire invaded the Johnsons' home and that he was heavily armed with an assault rifle when he and others assaulted Mr Johnson, putting him in fear of his life.

The prosecutor stated that Belizaire and others fled the scene leaving the injured couple without any assistance or calling for help.

The prosecutor also pointed out that although two of the co-accused positively identified Belizaire, he insisted on a full trial despite the strong evidence.

“He was involved in the commission of armed robbery in which two persons were heinously killed; he is a danger to society and has shown no remorse,” she stressed.

Mrs Kemp also noted that the law states that whoever commits robbery being armed with an offensive instrument using force and causing persons to be in fear for their lives shall be liable to imprisonment for 20 years, provided that whoever commits armed robbery with an offensive instrument where it is a firearm shall be liable to imprisonment for life.

Due to the armed robbery for which Beliziare was convicted, Mrs Kemp said that two innocent persons were gunned down.

“We say because of greed and selfishness, the convict, a healthy strapping young man, instead of looking for employment, armed himself and invaded the home of the Johnsons,” she said.

“The egregious nature here is he did not meet Mr and Mrs Johnson on the street and rob them. He invaded the safety of their home and their lives. He was looking for a big payday of cash and cocaine,” Mrs Kemp said.

The prosecutor called for the court to use its discretion in the sentencing by imposing a custodial sentence commensurate with the crime.

“We submit the court impose a sentence to deter others who would wish to follow Paul Belizaire, she said.

“This case cries out for the court's discretion. Due to the egregious nature of this armed robbery, the court is asked . . . to impose a sentence of 30 to 35 years, having regard to the fact that two persons have been killed.”

Mr Farquharson argued that Belizaire did not steal the truck but was an innocent rider.

Belizaire’s attorney further claimed that the Crown intentionally attempted to mislead the court sentencing of his client.

“When the AG asked for sentencing him with respect to greed for stealing cocaine and money they are deliberately attempting to mislead the court sentencing of Belizaire on a false premise," he argued.

He noted that co-accused Virgil Hall and Alan Alcime, who both accepted a plea deal with the AG’s Office by pleading guilty to the armed robbery and testified for the Crown, were sentenced to 10 years.

Counsel noted that the men ought to have been sentenced the same time as Belizaire so that well-established principle and proportionality would be applied across the board so that one sentence is not dramatically different from the other man’s sentence.

In a mitigating plea, Mr Farquharson told the court that Belizaire is a young man with no antecedents.

“There is no suggestion he is beyond reform. Why should he be thrown into the dungeon like a sack of potatoes to rot forever? It is ridiculous,” he argued.

He noted that co-accused Alan Alcime was the thief, and not his client.

“Belizaire innocently took a ride. He did not agree with Alcime to steal the truck; he never assisted in the taking of the truck or keys,” Farquharson submitted.

Alcime stole the truck and keys, he said. “He was leaving the scene, and Belizaire got inside and took a ride. There is no evidence of any invasion to get the truck. The only thing Belizaire did to make himself liable to armed robbery was catching a ride; there is nothing aggravating about catching a ride.”

Mr Farquharson also noted that each of the cases cited by the Crown is distinguishable in that the defendants were all principal armed robbers. He said Alcime was the principal robber, not Belizaire.

“This arose out of a spur of the moment decision consisting of Belizaire riding in the truck. He took no part in the killing; he detested what happened and was the one who tried to save their lives,” he suggested.

“He put his life in jeopardy to assist these people. Having regards to him putting his life on the line, I submit an appropriate sentence of two to five years.

"I am mindful of the principle of joint enterprise on which the Crown relies and which the jury accepted,” she said. “I do not accept the agrument that the sentence meted out to Alcime and Hall set the parameters that should be meted out to Belizaire as suggested by his counsel," she said.

Justice Evans explained that the principle of proportionality has to do with sentences that matched the relevance of time than the uniformity of sentences for defendants.

She noted that Alcime and Virgil Hall pleaded guilty to the charge thereby avoiding trial, but Belizaire was found guilty by a jury after a trial that lasted nine months.

The judge said that counsel's suggestions that the armed robbery had nothing to do with the truck, which was a spur of the moment decision, was clearly not accepted by the jury.

When considering the circumstances of the offence, Justice Evans said that she does not see how the court can isolate the stealing of keys and truck from the events leading up to that.

Justice Evans noted that Belizaire, armed with an assault rifle, was one of four gunmen that accosted Barry Johnson in his home for whatever reason, took his keys from him, then drove away in MrJohnson's truck for whatever reason without his permission immediately after one of his accomplices callously killed the husband and wife.

Taking everything into account, Justice Evans sentenced Belizaire to 25 years imprisonment, with the period of two years and eight months spent on remand to be taken in consideration and deducted.

Shirley Stubbs, the mother of Sheena Johnson, was pleased with the sentence imposed, but said it would not bring her daughter back.

"I give thanks to the Lord for He is good; I thank God for what take place - that ain't going to bring my daughter back, but I give God thanks," she said.

Greg Johnson, the nephew of Barry Johnson, was satisfied with the custodial sentence imposed by the judge.  "I feel it was justice," he said.

Devaughn 'Short Man' Hall who was convicted of the murders and armed robbery is expected to be sentenced on July 5.

The prosecution is expected to retry Belizaire on the murder counts, and Dames on all counts.