Two dead after shooting inside barbershop 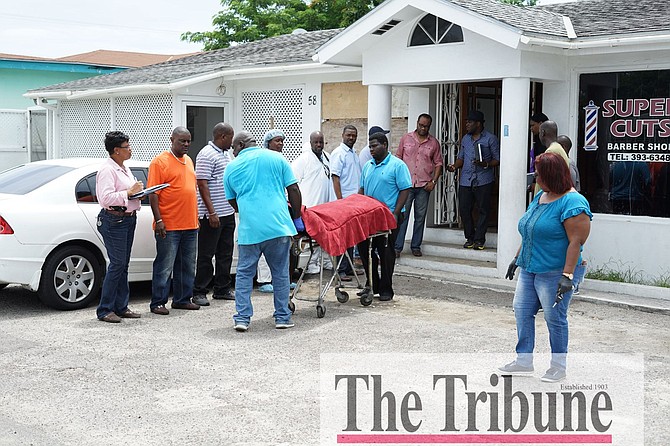 The body of one of the victims is removed from the scene on Saturday morning. Photo: Terrel W Carey/Tribune staff

THIS STORY HAS BEEN UPDATED HERE

Two men are dead after a shooting inside a barbershop on Saturday morning.

According to reports, a blue-coloured Japanese vehicle pulled up at the establishment on Jerome Avenue off Pyfrom Road at around 10am. Two men wearing hoodies, one grey and one blue, entered the shop and shot two of the customers who were being served by the barbers.

One man was pronounced dead at the scene by EMS personnel and the other was transported to hospital where he later succumbed to his injuries.

Police believe the victims were related and that the incident may be gang related.

POLICE ARE APPEALING TO ANYONE WITH INFORMATION REGARDING THIS INCIDENT TO CALL 911 or 919.

These murderous thugs are getting more & more brazen. Two Assassinations in a barbershop at 10AM sounds like a result of a serious revenge and pure hatred for human life. Cant even get your hair cut in peace anymore and sadly the owners and other barbers are out of a Saturdays income because of the murderous slimes that roam such a small town in the name of evil.

Many young men are losing the will to live. Giving up on life. They have seen so many around them slaughtered. Friends, family, coworkers. These were two brothers Cartwright brothers. And their father was also recently murdered. Shot to death.

These types of apparent planned assassinationsn need to be eradicated by the strongest legal means necessary as soon as possible ......

Ma Comrades, it's Saturday morning and you're heading over trim to your Barber located at Jermone & Pyfrom, which is not exactly rough part Nassau Town.... and you're not really thinking through - what could possibly go life threatening wrong sitting in ma barber's chair?

The precision by which they do the killings speak volumes. They are not strangers to guns or murder. And they do not fear man nor beast. One time ago they would cry like little babies when go to jail. But many of them feel safer in pro.

You gotta be kidding me, Just like that.. Two persons are dead and those two that killed them walks away fine for days.

The examples of the Bahamian Drug War in play. Remember, we're all cattle to them.

When the police can pump 18 bullets into the back of an innocent young man, the commissioner remains silent, the minister of national security says there will be no special investigation, business will be as usual and when the prime minister goes to visit the grieving families and the traumatized community but has a change of heart at the last minute.. our sons are not safe! Only DEAD!

That young man was not shot in the back. . .when our sons go to war with those same sons you talk about. . .enough said!! If you go and check the back-ground of those two young men you will not talk so much nonsense. . .

Another’s shooting in the Cowpen Road leaves a father dead. Shot when he arrived home was was exiting his vehicle.

Although not one quick criticize Comrade PM, face it, Red Shirts, the 289 Convention Delegates picking Minnis and KP lead party was a mistake already in 2017 making. Minnis and KP, have only intensified bickering among top tear party. The unenthusiastic are growing daily among even the die hard of the red shirts party supporters and party backers.
Wasn't but months after red victory train had left the station 10th May 2017, that the 91,409 begin see signs that two men's were incapable grasping onto major issues facing colony islands, with crime at very top list..... believing Minnis and KP, are incapable organizing even two car funeral possession at dead, long out office comrade politician's public purse's state sanctioned funeral possession.

%% or so of any population is born with sociopathic tendencies. If properly raised these people can be productive citizens they make particularly good soldiers, policemen, and other tightly structured jobs. If not properly raised then they make excellent hitmen for gang bosses as they can kill with no regret. We obviously have too many like this in the country and I can see no solution except to lock myself in my fortress home and not venture out after dark.

Simple common sense steps can also go a long way in possibly detering some of criminal activities.......simple for policeman to put road block outside station and charge motorists for ....heavily tinted glass on vehicles.....keep traffic flowing letting the lawabiders straight through.