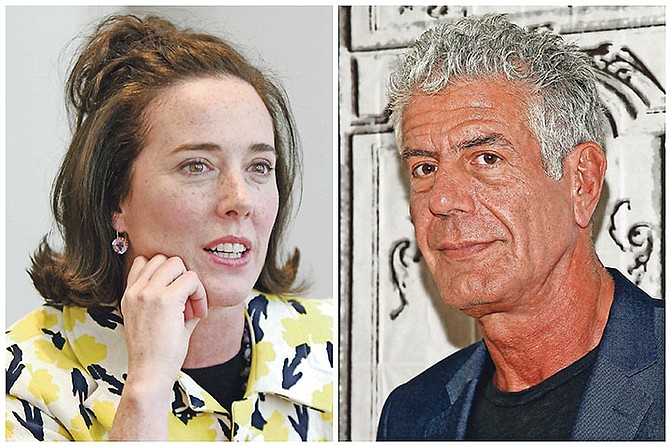 The suicides of Kate Spade and Anthony Bourdain have left many distraught - and wondering what they can do to reach out to those around them who may be in need.

I KNOW people with mental health challenges, some of whom are getting professional help and others who cannot afford it, do not want anyone else to know what they are going through, or do not think it would help. I have received phone calls and in-person visits from people who needed immediate assistance. During and after university, I was a live-in youth worker for at-risk women and girls. Before that job, I harshly judged people living in poverty, drug-addicted people, teenage parents, and any number of other people. I had decided that we all get to choose what we do with our lives, and our ability to succeed is completely within our control.

Coming face-to-face with my own ignorance and hypocrisy in a matter of days was nowhere near easy, but it was the most life-changing experience I have ever had. Among other opportunities and challenges, I completed suicide intervention training with a group of social workers. It was long, intense, transformative, and unexpectedly emotional. It reminded me of previous experiences, made me question the way I responded to situations in the past, and committed me to paying attention, asking questions, and listening for what is not being said.

On June 8, Anthony Bourdain was found dead in his hotel room in Strasbourg, France. The host of the award-winning CNN series Parts Unknown who had publicly talked about his mental health struggles died by suicide. Many people, so accustomed to watching Bourdain explore new places and food with acerbic wit, feel like they have lost a friend. They were attracted to the contagious curiosity that led him to ask people what they liked to cook and what they liked to eat, and the honesty that delivered his unfiltered thoughts.

Bourdain was not without success and did not lack money. He was a world-renowned chef and bestselling author. In Kitchen Confidential: Adventures in the Culinary Underbelly, Bourdain went beyond food, telling stories about his abuse of drugs and sex. He consistently proved himself to be a real, multidimensional person, but that he could suffer from depression and exit the world by suicide is still a shock. We have certain expectations of the rich and the famous.

Don’t they have everything they could possibly want and more? Can’t they afford to pay every problem to get lost? And what is there to be depressed about?

Bourdain’s partner, Asia Argento, described him as her love, her rock, and her protector. He stood by her side when she went public with accusations against Harvey Weinstein and spoke out in support of the women of the #MeToo movement. Bourdain is an example of a person who managed to support other people, but did not manage to save himself.

Are we supposed to save ourselves?

Just days before Bourdain’s death, fashion designer Kate Valentine (previously known as Kate Space) died of suicide in her apartment in Manhattan. Though she had not had a hand in the brand still bearing her name, many people responded to the news of her death with stories of their first Kate Spade handbag purchase.

Both Bourdain and Spade had what most of us are still trying to achieve. They found their passions and ways to share them with the world, and got more than pay cheques in return. They each had a fan base. They had families and friends. They were household names. Still, something else they had in common overshadows all of their achievements and possessions and the love in their lives. That may be what is most difficult to understand about depression. It does not match itself to the good in our lives. As large as the sun is, clouds can completely obscure our view of it. We may know it is still there, but that knowledge does nothing to replace the light. At night, when darkness comes, there is no sign that the sun will rise again.

To prove I was living my life in the best possible way, I had to ensure that there was never a sign of depression, or even sadness. Even if I experienced them, no one could know. This dictated countless thoughts and actions. This knowledge made it so that I never admitted to anything being wrong, and whenever anything was wrong, I suffered alone. I know that I am not the only one. There are other people who go to battle with parts of themselves that want to be vulnerable and honest, and allow someone else to help. They fight those parts because we are taught that it is better to be strong, smiling, and satisfied with whatever we have.

It has taken me a long time to realise that vulnerability is not weakness, and having challenges does not mean we are, in some way, deficient. It is still difficult for me to treat myself with the same kindness I extend to my loved ones. Maybe it is because I came to my understanding of mental health issues through my role as carer for others that it is easier to acknowledge, affirm, and attend to the needs of others than it is to even sit with my own. Part of it too, of course, is the way I heard people talk about mental health challenges when I was growing up. It is hard to trust people with personal information when it feels safer to keep it secret, even from the closest people to us. The people who are, perhaps, the most judgmental of them all.

After reports of suicide or attempted suicide, there is always an influx of positive messaging around mental health. Social media is flooded with posts encouraging people to seek the help they need. Talk to someone. Call a hotline. Text a friend. See a psychologist. There are numerous barriers to what seems like a quick and easy solution. To talk to someone, we have to trust them and be reasonably certain that they will only do what is in our best interest. To call a hotline, we probably want to be assured that we can maintain anonymity, and that the person on the other end is a trained professional. To see a psychologist, we need money. And not a small amount of money. To ask for help, we have to admit that we do not always have it all together, we are not always as happy as we look, and our strength sometimes wavers.

We have a great deal of work to do. We have to earn the trust of the people around us. We need to understand mental health and recognise that it is just as important as physical health. Depression and anxiety are public health issues and should be treated as such. Health care needs to include mental health care.

We have to do more than pray. As family members, friends, coworkers, and club members, we need to pay attention, be willing to listen, and hear what is not being said. We need to advocate for policy change. We need to check on our people, and not always expect them to ask for the help they need. Suicide is not a choice, and it is not selfish. Limiting lifesaving options through stigma, however, is a choice. Give your loved ones the chance to cope, to overcome, and to live. Do research, start conversation, and demand mental health care services.