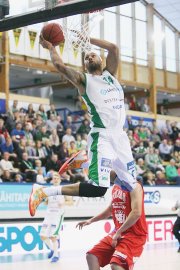 Jaraun “Kino” Burrows and his Fos-Sue-Mur Provence Basketball Byers closed their season with a history-making milestone.

The team won the France LNB Pro B title with a 76-70 win over Roanne to claim the league title and was granted promotion to the LNB Pro A league for the first time in club history.

Burrows scored 12 points on 4-6 shooting from the field to close out the series.

In game one, Burrows was limited to just 17 foul-plagued minutes and scored six points in a 72-68 win.

Roanne won both previous matchups between the teams during the regular season. On December 8, they won 76-71 and on March 20, they scored a decisive 99-64 blowout win.

FOS-Provence ended the season with six consecutive wins and head into the playoffs as one of the league’s hottest teams. They finished the season ranked No.4 with a 24-10 record.

“It was a long season, but a good season,” Burrows told The Tribune during the playoff run,

Following a late-season stint and playoff run with FOS Provence Basket last season, Burrows agreed to a contract extension to return to the club this year.