Ayton: 'I Represent An Entire Nation' 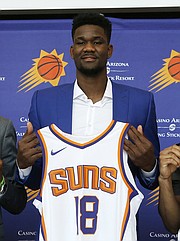 Phoenix Suns’ Deandre Ayton poses for a photo as the team introduces their top pick after the NBA basketball draft on Friday, June 22, 2018, in Phoenix. (AP Photos/Ross D Franklin)

AN eager Phoenix Suns fan base was officially introduced to Deandre Ayton and expectations already loom large for the first No.1 overall NBA draft pick in franchise history.

Ayton and other members of the Suns' 2018 Draft class - Mikal Bridges, George King and Elie Okobo - were introduced to the organisation Friday at the Talking Stick Resort Arena.

One of the main headlines emerging out of the press conference, Ayton revealing that he is likely to wear No. 22 for the Suns.

The top overall pick comes with expectations of leading a franchise and the Bahamian star appears ready to do so in Phoenix.

"I embrace it a lot. Throughout my career I've always had a chip on my shoulder when it comes to expectations knowing I represent an entire nation (the Bahamas)," he said. "Coming in I want to set the tone. I know I'm coming in as a rookie but that doesn't mean I don't mean business on the floor as well."

The Suns have a new regime at the helm with new head coach Igor Kokoskov.

"I think he's going to be one of the elite defenders in this league," Kokoskov said. "He can match everything other big guys can do right now in the league."

With Ayton's selection, the Bahamas now joins the United States, Canada, Nigeria and Australia as the only countries with multiple No.1 overall NBA draft picks.

He is the ninth consecutive college freshman to be selected with the first overall pick.

The Suns have drafted as high as second twice, in 1969 and 1987. They finished the 2017-18 season 21-61 but return a promising young core led by rising star guard Devin Booker who averaged nearly 25 points per game last year.

Ayton previously mentioned the prospects of teaming with Booker to create one of the league's most dynamic tandems.

He averaged 20.1 points and 11.6 rebounds per game while shooting 61.6 per cent from the field, and was "Karl Malone Power Forward" of the year consensus First Team All-American.

The first player in conference history to win all awards.