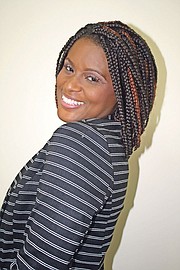 Journalist-turned-blogger Hadassah Hall has a passion for the Over-the-Hill community.

Some of the stories featured on the ‘Over the Hill...The Other Side’ blog.

Former news reporter Hadassah Hall is using her writing talent to initiate what she hopes will become a unique storytelling movement.

Presently in the public relations field, Ms Hall, who previously worked in newspaper, radio and television broadcasting, has launched a personal blog called 'Over the Hill…The Other Side.'

"On my blog, you will find no dead bodies, no blood, no gun cartridges in the road, no body bags, no hearses, no handcuffs. The photographs are different. The stories are different. I'm just starting out, but I hope it gains traction in a positive way," said Ms Hall.

"I am a storyteller and feel compelled to share the stories of people Over-the-Hill - whether they live through Eneas Street, Rupert Dean Lane, on Wulff Road, or perhaps moved away but are proof of what over the hill has produced. Quite frankly, I am tired of seeing so much negative news about those in the inner-city. There is another side to this community that is rarely told. Therefore, it is my mission to do what I can to shine the light on the positive people it has, and continues to produce."

Describing herself as a "journalist at heart," Ms Hall said she wants to reframe coverage of Over-the-Hill.

"I want people to see beyond the present narrative. Over-the-Hill has for far too long been associated with drugs, violence, poverty, brokenness…I'm not turning a blind eye to the social ills that exist, however, it's not the whole story," said the blogger who herself grew up Over-the-Hill.

"There's the other side. And yes, the people themselves have a lot to do with the denigration of this part of New Providence that has such a rich history. However, for every murderer, drug dealer, unfocused young person, there are do-gooders Over-the-Hill. There are people who are helping their neighbours, those who are entrepreneurs, focused young people and others."

Additionally, Ms Hall spoke of her love for writing and how important it is to use one's gift to uplift others.

"Writing is my love. It's my talent. It is a part of what I do professionally in public relations, but it is also a hobby. I'm therefore taking what's in my hand and making a conscious decision to craft a positive narrative," she said.

"I want to tell positive stories that have the power to be read by people, even if just one person, who may say, 'Wow! If she can do that, why can't I?' or 'Look at how focused he is. I need to change my course of life.' "

Some of the persons featured on the blog have moved away from the community, but still have businesses there, or they were born and still reside there. Ms Hall's focus is to get people to look at the good Over-the-Hill has produced.

"For example, one of the persons I feature is a young man, Gerrard Russell, who is from Chippingham, but is now in Canada on scholarship. He said he never thought he would be able to go off to school. Then there's a young lady who has a Bachelor's degree in journalism, but she has a talent for creating things from elegant jewellery sets to simple or elaborate head pieces. I'm so proud of these young people for being intentional and not falling victim to their surroundings," said Ms Hall.

"There is also a feature on Great Commission Ministries, located on Wulff Road and ran by Bishop Walter Hanchell and his wife Minalee. This place is such a godsend for many. People pass and never think it could be them asking for a handout, but the Hanchells, who too at some point lived Over-the-Hill, pour into the homeless, the elderly, children, the unemployed, bruised and battered. They cater to many who are marginalised. They are a blessing to Over-the-Hill, feeding some 300 people daily."

Additionally, Ms Hall spoke to how important the blog is to her personally.

"I have a passion for writing. I have told people I would even write on my death bed. The journalist in me will never die. Since writing is such a huge part of who I am and I need this release, I figure I would use my talent to help elevate a community that is so often frowned upon. Trust me, there are some wonderful, positive people Over-the-Hill," she said.

"So many times we are told to 'think outside the box'. Well, I choose to go a step further and create my own box. Why? Because as a writer I believe I should use my skills to make a difference. I have the power, via this blog, to make steps in portraying the people of Over-the-Hill in a different light," she said.

"To a great extent, the Over-the-Hill people have been ostracised, marginalised, lumped in one heap. However, I want to tap into that pool of positive people and shine the spotlight on them. No money is involved in this, but there's nothing like doing something you love. I'll always be a storyteller. It's intrinsically who I am."

Read the first few stories on 'Over the Hill…The Other Side' at www.overthehill242.blog.