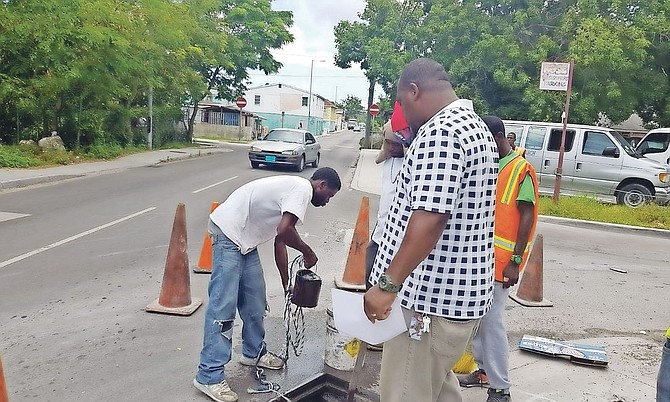 Teams at work as part of the clean-up exercise.

THE government is repairing water pumps in Over-the-Hill communities as the hurricane season heats up as part of its wider plans to improve living conditions there.

Seventy-seven standpipes are being repaired in Centreville and Bain and Grants Town.

The repairs are being performed by three companies given the job after a request for proposal process was initiated by the Ministry of Works.

Kemie Jones, project manager for the initiative, said yesterday 15 people have been directly employed and hundreds will benefit once the repairs are completed.

He said: "Looking at the white paper (for Over-the-Hill rejuvenation), as indicated in the data there, there are like 4,400 homes, only about 2,000 are on the government system, meaning either you're using government pumps or groundwater. Groundwater under the area according to Water & Sewerage and the Pan-American Health Organisation, is not good. While we work on a strategy to assist people in getting pipe water to their home, the first step would be to make the experience of going to the standpipes a dignified one. A lot of the pumps were damaged or broken or leaking and had issues going, so one thing we tried to do out of our budget was to fix the damaged pipes so people wouldn't have to walk so far to get water."

Water and Sewerage Corporation executive chairman Adrian Gibson previously revealed to The Tribune that a project to connect two-thirds of Over-the-Hill residential dwellings to a centralised sewerage system will cost $74.659m.

Mr Gibson said a low-lying water table and high tides frequently caused back-up and other problems for people in the area with septic tanks and soakaways.

"These conditions are not ideal, and can precipitate the outbreak of waterborne diseases," he said. "Infants and the elderly are especially susceptible. The introduction of a centralised sewerage system will require considerable street trenching, but it will be part of a holistic approach taken to develop sewerage systems in this area and address current infrastructure needs."

The government has budgeted $5m for its Over-the-Hill initiative in the next fiscal year.

A major component of the initiative is tax exemptions that will be offered to residents and businesses within the "empowerment zone".

As he tabled the white paper for the initiative in April, Prime Minister Dr Hubert Minnis said: "We know that the physical environs of Over-the-Hill is not where it should be. While there are many gems in the community, there are also many rough stones.

"Over the past months, the people have witnessed a massive cleanup effort in the community. We plan to make this more consistent. We need to increase existing waste collection efforts in the community. We are planning to restore public spaces and recreational facilities. Two other key aspects of this component include: working on improving housing in the Over-the-Hill community and a 'Water for all Strategy' to eliminate the need for standpipes and outside toilets by 2025."