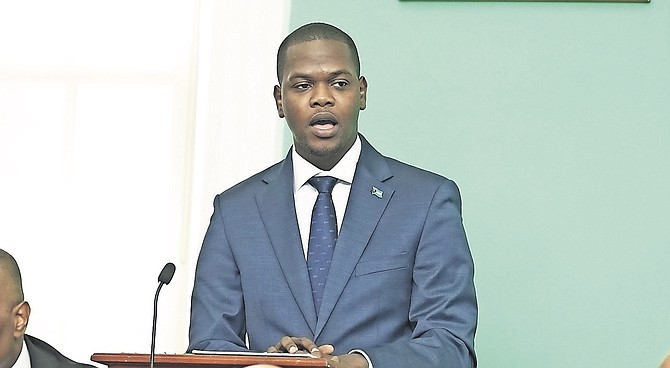 LESS than ten days after being fired by Prime Minister Dr Hubert Minnis from his post as parliamentary secretary in the Ministry of Tourism and Aviation, Bain and Grants Town MP Travis Robinson has launched his own tourism consultancy business.

The company’s name is Consult Bahamas Limited, and Mr Robinson described himself as president, CEO, and chief tourism consultant in a post to Facebook on Wednesday afternoon.

Mr Robinson provided more information on the company during a press conference he held yesterday to launch a $100,000 roof repair initiative to help 200 households in his constituency.

When asked why he chose consultancy as a field, Mr Robinson referred to his academic background in tourism management and his former government position.

“As it relates to the consultancy work that I intend to do, that is a personal initiative of me, as Travis Robinson, the man behind the name,” he said.

“I’m using some of the experience that I would have gained at the Ministry of Tourism and Aviation where I served as the parliamentary secretary, as well as my background knowledge from the University of the Bahamas, studying tourism management.

“Given the fact that I have been able to serve on various committees in the Ministry of Tourism, I’ve worked directly with the minister of tourism and I’ve been a part of a number of investor initiatives in the tourism field.

“And so we’re all aware of the many red tape that we as Bahamians go through, whether it is at the Passport Office or Road Traffic (Department) to get your licence, etc, and so my job now is more or less consulting as it relates to tourism initiatives, how we speed up the process to get various investments going.”

Mr Robinson declined to say whether he has received any offers from the government as yet, saying that he does not want to “spur up any unnecessary talks about it.”

However, when asked if this will be a consultancy firm for government or private companies, the Bain and Grants Town MP said he is “open to whosoever will.”

According to the area MP, the goal of the project is to assist 200 households within the community that are in “desperate need of roof repairs,” this hurricane season.

Mr Robinson noted that roofing issues are the “overwhelming concern” of members of his constituency. He added that he now has “even more time” to focus on the challenges residents face.

“This initiative will be done in four phases,” Mr Robinson said. “This morning we launched phase one, which will include the distribution of materials to individuals who are employed but still are in need of assistance to complete their roofs ahead of the major hurricane season.”

These materials include plywood, shingles, felt, and other construction items needed to renovate roofs.

“Phase two would include individuals who are single parents as well as the elderly (and) will include materials as well as physical construction and renovation of those individuals’ roofs.

“Phase three will also include the same thing, and then phase four will be opened up to the general constituents throughout the whole of Bain and Grants Town.”

Mr Robinson said phase four will be geared to people who are also employed, but may be in a “financial difficulty” and could benefit from the materials.

A two-month assessment was done ahead of the launch, where roofs were checked to determine who would be the recipients of the initiative.

Mr Robinson said a number of private businesses were also contacted to ask for assistance. He particularly thanked Fidelity Bank, which he said is the “platinum sponsor” of the initiative. Other sponsors include Family Guardian, Super Value, and JS Johnson.

“The overall project will cost us an excess of $100,000,” Mr Robinson said. “What we are focusing more or less on is the distribution of more or less supplies. As I mentioned, the individuals who would receive more than just supplies will be more or less the elderly persons in the community as well as single parent homes. So that is where the bulk of our finances in terms of construction and renovations physically will go.”

The first phase is estimated to take a month, and the timeline for all four phases is approximately four months.

When asked what will happen to homes that possibly will not be fixed before a major hurricane should arrive, Mr Robinson said in three weeks the official Bain and Grants Town Hurricane Taskforce will be launched. He said it will be comprised of individuals within the community and will address such concerns then.

Mr Robinson also said that he does not have any “specific thoughts” on former Deputy Prime Minister Frank Watson’s comments on Guardian Radio on Wednesday. Mr Watson said he did not believe the prime minister had to fire the Bain Town representative and two other MPs, who along with Mr Robinson voted against the VAT increase, from their government appointments.

He added that in Parliament he represents his constituency. “And so it is for them that I voted as I did inside the House. I can pay the VAT, as an individual. But it’s not about me. It’s about the thousands of people in Bain and Grants Town who are depending on me to be able to be their voice inside the House.”

FNM Centreville MP Reece Chipman also voted against the VAT increase however he held no government position from which to be fired.

I knew he would land on his feet. Now all the government has to do is hire him as the consultant on projects. He stands to make more than $48,000 a year.

I fail to see how a man who didn't complete his degree and only held the PS position for 1 year could have any real expertise to consult.

Whoever is in his ear, well played Mr. Robinson. These political parties always look out for their own. He publically apologized and now he's back in their good graces.

They can't give him the PS job back, so this is the next best thing.

I agree he has no experience to consult. Gonna be interesting to see who his first client is.

Travis, you are a smart and talented young man. I'm sure the FNM will continue to look out for you. Stay focused and do the people's work. You have the attitude of a champion and the heart of a leader. Your future is bright.

Which more dumbfounds the feeling the forgotten 91,409 Comrades since 10th May, 2017 voting in 35 red shirts candidates that From Colony Islands Colonial Post, a young Comrade Travis - would've questionably by all standards colonial form - reposed he self from seeing the wisdom kick off his new income stream by providing information on his new company during a press conference to launch a $100,000 {PublicPurse} initiative to repair roofs in his constituency.
Sadder still that so soon after having been presented with opportunity could've walked into House wearing a newly acquired "Mavericks's Corned Beef Beret - he caved stood tall on floor House under uninterrupted cover House Speaker- whilst sporting the same red party's Beret he wore during the Imperial red shirts 'misinformation' 2017 general election campaign........ or just yesterday when the other Colonial Minister - Even More Reposed Plans eagerness grant "uncosted and untendered" PublicPurse monies to a startup tech firm to fulfill his wants Single Digital ID for all Bahamalanders and residents. How sweetly would be if all 35 Comrade red shirt MP's - would brungs themselves spends more time - reposing in and on behalf pressing needs Bahamalanders.... Likes the issuing of Work permits foreigner labourers lay Cement blocks over at LePointe - ain't exactly prioritizing putting names citizens on da paycheques. {Comrades, this is too serious letdown PeoplePublic business - make this up. Isn't it bad enough forgetfulness of faces 91, 409 warmly greeting the knocks the 35 at their front doors Sin of all red wicket Sins - is to leave their names off Le Pointe's paycheques? }. Paycheques not bearing names natives are forgotten natives. The natives need read posts from bloggers about improving their lot's - not pulling for more their MP's... but little shocks them since 10th May 2017.

i want to know who's money he is spending

Now, as he becomes more bourgie, he will become more expensive to maintain ......... then the boosters will have him by his NUTS.

All I hoping is such news doesn't reach all way other side pond to our Comrade Queen's royal ears... told it royally upsets Her Majesty, when news reaches how colonialists are acting - all independently minded.

Her Majesty ain't checkin' for us. She don't even know they took her name off the prison yet. Let's just hope she chooses Harry instead of William, and be quick about it.

doesn't take very much to declare ones self a 'consultant' does it? .. the late Paul Adderley (Cambridge graduate) used to say that word is nothing more than a euphenism for ' influence peddler'

Ma Comrades, I admits I was all sucker punched fooled into a fizzy to believe we were about to witness Four "Maverick" Red Shirts MP's - crossing floor over to other side Peoples Honourable House of Assembly (PHHOA) ... Instead, I is,left trying works though the fizzy of it being startup for a now but a new team just one since 10th May, 2017 was put on PublicPurse's payroll - maybe becoming Paid Consultants Party- who will find it much difficult whether be in conflict when comes asking or lobbying Imperial red shirts cabinet members - for answers questions on behalf constituents - or on behalf paying bills clients? I'm thinking, the one paying higher price can expect greater representation? Comrade "Consultant" Travis done declared... So now be wait and see - what will other three red MP's do?

Travis needs to go and take up some elocution courses, though. He may have graduated high school and started UB, but his speech delivery leaves much room for improvement ........ at least he is better than Hubbiggity and Hubully, at this stage in their political careers ..... maybe it is his ghetto accent.

People I know most of yinna "political limited persons" will expect me to "support" the FNM no matter what they do! But I say to Mr. Robinson. . .bro. . .this smells of the same ole political peddling that we got rid of the PLP for. . .THIS IS THE TIME TO PROVE YOUR TRUE GRIT AND INTEGRITY. . .this one done "NOT" pass the "smell test". . .these same "supporters" you thought you had when you proved "ammunition for chapping doc" were down with you!

Now that it looks like you have "been bought out" . . . your announcement of starting your consulting business. . .in tourism. . .the place government fired you from. . . I think yinna got my drift. . .this one smells of old PLP/FNMish "buying-sellin out" yasef for "gettin mine" bro!!

Runner this one looks like old time Bahamian politics. . . "his bank book empty" is not the point here. . .THIS GOVERNMENT PROMISED NO CORRUPTION AS USUAL AS WERE DONE BY OUR LAST GOVERNMENTS!! He can become a consultant. . .that's his right as a citizen. . .but hey must never try to take us for fools. . .THIS WALKS LIKE A DUCK. . .QUACKS LIKE A DUCK. . .AND WE MUST CALL IT A FISH? A government contract given to this MP after he got "swing" will compel me too to march against corruption. . .THAT'S WHY WE "MURDERED" THE WHEELING-DEALING PLP. . .never I say. . .never again will we be pissed upon and told it's raining!!