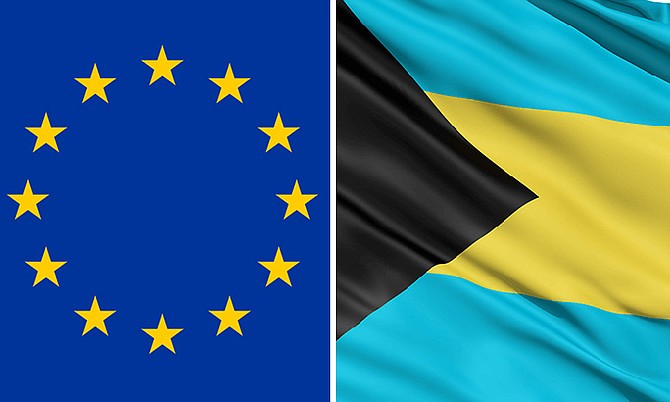 The Bahamas has been “blacklisted” by the European Union - despite a last ditch effort this week by the Deputy Prime Minister and the Minister of Financial Services to ward off the move.

A statement released by the Ministry of Finance on Tuesday said: “The Bahamas was today included on the European Union listing of non-cooperative jurisdictions for tax purposes at its meeting of European Council of Finance Ministers, without discussion.

“The Bahamas notes the comments included on the EU’s Press Release, indicating a lack of commitment at the highest political levels; which is regrettable. The Bahamas government through the Ministry of Finance has consistently been engaged with the EU’s Code of Conduct Group and has responded to its requests. Prior to today’s meeting, at the level of the Deputy Prime Minister, The Bahamas reiterated its commitment by formal letter and is on schedule to meet the December 2018 deadline set by the European Council for implementation of the areas of concern indicated.

“Deputy Prime Minister & Minister of Finance K. Peter Turnquest and Minister of Financial Services, Trade & Industry and Immigration Brent Symonette travelled to Brussels ahead of today’s meeting in an effort to engage the Code of Conduct Group and the EU Council directly.

“The Bahamas remains committed to complying with international regulatory standards and initiatives and will continue to hold discussions with the EU to determine how we can work together to ensure a better understanding and facilitation of the process to be removed from this listing in the shortest time possible.”

The question is did they have a confirmed appointment or audience prior to departure? If not why were they caught so unawares? Was this trip a waste of tax payers money for show, form and fashion?

They've expressed shock that we were blacklisted and don't understand the statement "lack of commitment at the highest political levels" as they were in contact with the EU's code of conduct group. Well this could be a lesson in what you say versus what you do. I could be wrong but the flagrant ramming through of this nonsensical no EIA required Oban deal might be considered a moved by the "highest political level" to push through future deals irrespective of good practice.

If Dr Minis wants to save his leadership, he had better get some qualified people at the top positions in finance starting with the two top top positions where he knows those persons aren't qualified. He's brought in the former treasury secretary to bolster one position but that won't work. You can't have a qualified person reporting to a completely unqualified person if you want progress . This is no time for campaign workers and cronies. And he better put some qualified economists on the economy council, clearly listening to the choir isn't working.

All I can say is.......this FNM Government appears to be in way above their heads. The two former Governments wrecked our Bahamaland.... and these jokers have no clue as what to do. God help us......

So a woman finds her husband was going in the strip club after work. So rather than deal with her husband she decides to try close down the strip club. So a man finds his wife is spending too much money shopping. So rather than curb his wife’s spending habits, he decides to try shut down all the shopping mall. See how dumb the EU policy is. And similar is the lopsided policies of the WTO. They have told The Bahamas to get rid of customs duties because it is a barrier to trade. But what is their Tesoro Donald Trump’s newly imposed tariffs on aluminum and steel. ‘It’s ok as long as you don’t impose it on membership States.’ So what is good for the goose is not good for the gender.

i agree with John. they need to police their own people and businesses but instead put the responsibility on foreign governments.. its simple, so easy to bully small, defenceless states.. they know full well these states will come crawling and begging for mercy, then they will impose even more requirements. when you give into this kind of economic terrorism, you invite even more. its nothing more than a coup since gov't policy in this area at least, will now be dictated overseas..