Wet - But Breaking No Records 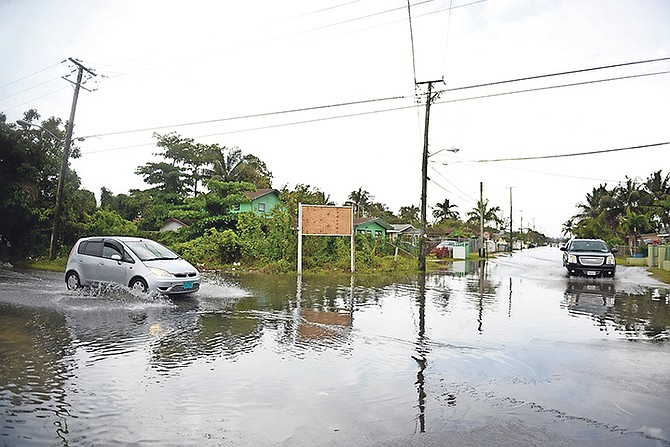 ALTHOUGH the recent rainy weather has been abnormal for March, the country did not experience record-breaking inches of rainfall, Chief Meteorologist Basil Dean confirmed to The Tribune yesterday.

Sunday and Monday’s storms were punctuated by loud claps of thunder, lightning, and flooding in some areas of the capital.

Mr Dean also discussed the cause of the high tides and severe swells the country experienced last week.

When asked about the rains, Mr Dean said: “Well I can say it hasn’t been normal, considering the fact that we usually have reached about three, four inches of rainfall in the month of March.”

“But over the last two days we had…. Certainly, over five inches of rainfall.”

“No record-breaking, in that sometime back we would’ve had about 7.44 inches of rainfall in a single day.”

“So we are  nowhere near that, but certainly significant enough to lead to flooding in many of the low-lying areas of New Providence.”

Mr Dean said the storms are not expected to continue. Yesterday afternoon was expected to be “the last of the rains,” he said.

Mr Dean added that “cooler and drier conditions will follow” in the coming days.

The chief meteorologist also confirmed that the high tides and severe swells the country experienced last week were a result of the powerful storm that hit the Northeast United States earlier this month.

He said: “That was in response to that deep low pressure off the east coast of the United States which generated the large swells that impacted our coastline.”

Although another winter storm is expected to hit the same region of the US today, Mr Dean does not anticipate that the storm will have a similar impact on the Bahamas.

He added that the only area that may see some swells is Abaco.

On March 4, the Glass Window Bridge in Eleuthera was closed due to large and dangerous swells, and the public was told to stay away from the area.

That same day, four people were injured as they attempted to climb rocks on the side of the bridge. On March 5, an American man was washed away into the sea at Queen’s Bath, near the bridge. The family of the 19-year-old, Jonathan Brussow of Michigan, said his body was found a “atop a cliff” in Eleuthera on Friday.

Also on March 5, a boat capsized off Crooked Island. Although Terrance Bullard, 43, was able to swim to shore, his companion Derek Collie, 38, is still reportedly missing at sea.

On Wednesday, seven people had to be rescued from waters off Eleuthera after being swept off the Glass Window Bridge by severe sea swells.

Chief Superintendent Stephen Adderley, officer-in-charge of the Eleuthera Division, said the group elected to cross the bridge by foot despite several warnings.

Shortly after 4 am Sunday morning, two men were reported missing at sea after a boat capsized off Great Stirrup Cay.

Four other men who were onboard that vessel were later found adrift. Three of the men are Bahamian and one is Honduran. The other two are reportedly still missing.