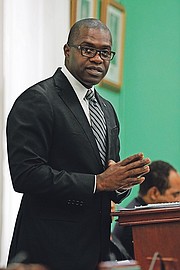 STATE Legal Affairs Minister Elsworth Johnson wants deliberations in the public domain about marital rape to be “sober” amid continued consultation of the drafted amendment to the Sexual Offences Act intended to criminalise non-consensual sexual intercourse between spouses.

Speaking in Parliament yesterday, the minister said women, men nor children are “property”, adding some day the country must come to a conclusion as to what it will do with women.

He also said it was his hope the Freedom of Information Act would be fully brought into force by the end of this year.

“I want to commend (persons in society) for identifying the fact that woman or man or children are not property. So as we go through these deliberations I want it to be sober.

“I want to us understand what the Constitution is all about, but the discussions are ongoing and some day we have to come to the conclusion as to what we will do with our women.

“So we have had those public consultations. Nothing is written in stone. The (Bahamas) Christian Council has sent their recommendation and a number of other civil society grouping are sending their consultations.”

He continued: “Towards this end and in accordance with our international commitment with the United Nations to eliminate all forms of discrimination of violence against women we have drafted an amendment to the Sexual Offences Act, which is intended to criminalise non-consensual sexual intercourse with spouses in a subsistent marriage, which is evident by acts of violence, economic extortion or threat of removal of financial support of the family or any forms of mental, emotional or psychological coercion or false consent to sexual intercourse.

“We are pleased to report that a purposed suggestive variation of the draft bill, which criminalises the actions of threat referred to in the above was done to the act by the Christian Council.”

The Yamacraw MP further updated the House on the Freedom of Information Act. Prime Minister Dr Hubert Minnis last week tabled the appointed day notice for the enactment of the whistleblower protection provisions of the FOIA.

He said the Office of the Attorney General is seeking technical expertise and advice from Jamaica’s information commissioner to supplement the work on this legislation.

“At this point the Office of the Attorney General is seeking some technical expertise and advice from the Jamaica information commissioner, which we hope to receive in short order and even now we are seeking to identify suitable candidates for appointment of the information commissioner as well as information officers in every ministry or department so that at the very latest we might bring the Freedom of Information Act fully into force by the end of the year 2018.

“Mr Speaker, we are not afraid to be accountable and transparent in our governance and the governance of this country. The Office of the Attorney General collaborates with members of civil society and the wider general public in addressing the concept or legislation that concerns the growth of this country,” Mr Johnson said.

To criminalise non-consensual sexual intercourse between spouses. - is simply bullocks!

I pity your poor wife if you are a married man.

well said. I fear it falls on ears that are deafened by power hungry and manipulative religious "leaders"

The headline caught me off guard when I read "Minister" Then, he says, "I want to us understand what the Constitution is all about, but the discussions are ongoing and some day we have to come to the conclusion as to what we will do with our women." Perhaps, because men have so thoroughly screwed up this country, and this world, for that matter, what should be said is this. "Our time to lead is over. Men have had their chance. We see the results. We are not impressed. Now it is time for women to decide what we will do with our men." This is some crazy shit these people are talking in Parliament.