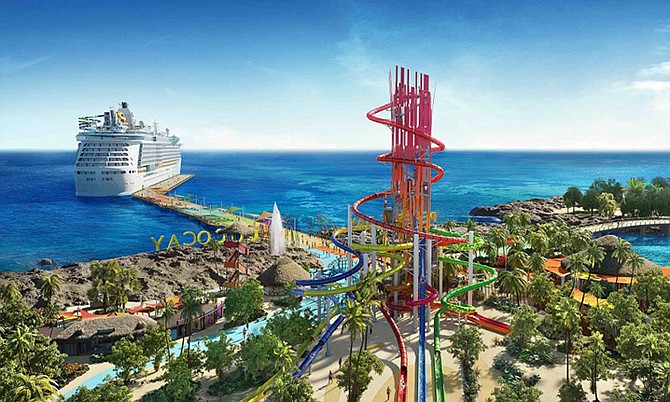 Upon completion in 2019, the island will have one of the largest water parks in the region and the tallest slide in North America.

The project will be named “Perfect Day at Coco Cay” and feature thirteen slides, a 1600-foot-long zip line that lands in water, a helium balloon ride that takes cruise passengers 450 feet into the air, and the largest freshwater pool in the Bahamas and Caribbean.

He said the project has been in development for three years and will be unique for a cruise ship private island.

“It's really about bringing the kind of innovation and creativity that we've brought the past few years to our ships and creating the kind of experience ashore that we think (will) deliver the perfect day.”

According to USA Today, this will include “the installation of a pier that will be able to accommodate even the biggest of Royal Caribbean’s 24 ships”.

Presently, “vessels visiting the island…must anchor off shore and ferry passengers to land, making it off limits to Royal Caribbean's biggest vessels.”

Mr Bayley said this will allow Royal Caribbean’s Oasis Class ships to visit. The three ships in this line can hold more than 6,000 passengers and are 30 peer cent bigger than their competitors. Each weighs more than 225,000 tons.

At 135 feet high, “Daredevil’s Peak” will be the name of the tallest slide in North America.

There will also be a fully vertical, high-speed slide called the Screeching Serpent.

The 1600-foot-long zip line ending in a splash water landing also will be the first in the Bahamas or Caribbean, according to USA Today.

The freshwater pool will have three coves— one for families with a “kid-friendly beach-style entry area”, another for adults featuring a swim-up bar, and a third with private cabanas that will be available at an extra charge.

For sports enthusiasts, the “South Beach” area will allow for soccer, volleyball, beachside basketball, glass-bottom kayaking, zorbing in an inflatable zorb ball, and paddle boating. There also will be a floating bar in the vicinity.

Furthermore, there will be a private beach club that features “the only over-water cabanas in the Bahamas”.

There will be an extra charge for the use of many of these new inclusions, including the water park.

The pier is expected to be completed this September and the entire project completed by November 2019.

However, “Perfect Day at Coco Cay” has been with some criticism by some locals.

Activist Heather Carey, of Raising Awareness about the Bahamas Landfill (RABL), denounced the project in a Facebook post on Friday.

Ms Carey said: “Just another example of how the cruise ship industry does little to benefit us locally, and instead continues to make the visitor experience more insular to the cruise ship islands, taking away any motivation to explore places like Nassau or to enjoy the excursions we offer.”

“Sad. We cannot give away any more of our beautiful Bahamas to these bottomless pits.”

In another Facebook post, Theo Linn wrote: “This once beautiful island was known as Little Stirrup Cay.”

“It now represents tangible proof that our species is in the process of amusing itself to death. Goodbye beloved Bahamas.”

A third Facebook user added: “Seriously. If guests want Disneyland, then go to Disneyland. Such a loss of natural beauty.”

Tourism Minister Dionisio D’Aguilar could not be reached for comment up to press time.

Only problem Ms. Carey, while I am with you that these private cays really bring no lasting benefits to the Bahamas itself except to "say" its in the Bahamas, I am equally disturbed that such a good job is being done directing cruise ships and its visitors to Nassau. Today for example there were at least 5 ships in port in Nassau. That's today. But how many were here for the week so far? Then, how many would you say have been to Freeport for the week?

I see no problem with this cay development. Yes, our "take" financially might be low - but people returning home and saying they had a good time in the Bahamas will do good to improve our reputation.

If they pay regular per head departure tax, that's good enough. If they pay less than that then it should be shut down.

...oh, and of course i mean if we dont have to pay for the dredging or the pier or anything else. They invest and profit. We collect departure tax. Everybody is happy. We get money for every visitor - better than Oban where we don't get one cent per barrel of oil thru the out-pipe.

Mother nature will destroy it eventually...

First hurricane! Bet they won't be around to clean up the debris!

With over 40 cruise ships under construction world wide until 2026, all of the major cruise lines will be dupilcating the developement or buying or upgrading their own private islands. While the Bahamas is blessed to have so many to chose from, the gov should 1) Mandate the percentage of Bahamians employed on each island. 2) Put policies in place to not only tax the landing head count but also Tax the use of all attractions and amenities. 3) Tax cruse ships for time spent at these islands by implementing dockage fees 4) A section of the port department should be created for inspecting and regulating the safety of attractions with bi annual inspections.5) Mandate in all agreements with all cruise lines that some ships must call at inhabited Bahamian ports in porportion to the ones stopping at the privatse islands.

Royal Caribbean passengers are the cheapest and worst passengers of any of the cruise lines. They do not spend money in Nassau and most barely even get off the boat. It's far better to have them go to a private cay and pay their departure tax. That was all the money we were getting from them anyway. Cruise ship passengers are not the kind of tourist we want in the Bahamas. We should be focusing on people who fly here, and stay here and spend money here.

Any insight as to how much pollution and reef destruction these cruise ships cause? The citizens of Venice are rallying against the mammoth cruise ships coming to their port saying they and the tourists are destroying their beautiful city and their lives!

It has all been explained before how the cruise lines benefit and the Bahamas gets miserable dregs from these private cays.

The Bahamian Government should move NOW to rescind ALL of these private cays/day resorts deals that the cruise ships have access to ........ or tax them a minimum of $50-100 million a year as rent or lease of our territory ....... The cruise ships will eventually use their cays and not stop at Nassau ...... hence creating their own tourist haven in The Bahamas ........ The lease or sale of Bahamian cays to cruise lines was stupid from Day 1 and now I hope that Minnis and DD see how dangerous it will be when The Bahamas now tries to negotiate any new taxes or revenue enhancement deals with the cruise lines.

My Comrades, some 500,000 alone viewers and listeners' will be turned into ZNS on Wednesday for what will now be PM Minnis's third lost opportunity to explain the much controversial Oban Heads of Agreement having ducked out House on the two most previous House of Assembly sessions..... it's all or nothing for the red Imperial PM .Either he explains 'everything' about Heads of Agreement cause it's will be his Oban D-Day as PM. I wish someone else was there among red MP's any more qualified to replace fumbling Minnis. What we goin' do once Minnis gone from PMO? You can only misled natives so long before they see lies in their midst.

sheeprunner12 Your totally right. The cruise ships will quit coming into Nassau in particular. They already warn their passengers that Nassau has a high crime rate. Even right off the ship. They tell their passengers to leave all money and jewelry on the ship. They have already paid for their excursion on board and they may take 20.00 with them for incidentals. Sometimes not even that. Once their off the ship they may see something that they want but they didn't bring their money. That's why they don't spend money. Some don't even bring money to tip. They like their own islands where they feed the guest and they set up a little straw market. It's boring as hell. I've been and I hated it will never go on a cruise again that's stops at their own island. Most people don't know the difference and they enjoy it. The beach wasn't even nice, it was rocky. Awful!

Government needs to negotiate where we become the 1st stop on these 7 day cruises instead of the last. By time they get to Nassau the passengers are spent (mentally and physically) and have little urge to explore or spend anymore. Also, we need to negotiate where passengers have the option to board the ships in Nassau instead of Florida. Hopefully then some of these passengers will arrive a day or two early - stay in a hotel and enjoy what Nassau has to offer.

Doesn't matter what gimmicks you try with these cruises ........ it is a LOSING investment for our country ........ either get our max lease price for the cays now and collect FULL departure taxes and get rid of any other side deals that we have to "beg" them to come here OR we will continue to upgrade and invest in vain ....... Why are we begging cruise ships to come here????

The cruise ship business is just like the EU blacklisting ..... too many moving goal posts for us to maintain.

I like that idea boarding the ship in Nassau. I would do it.

Ma Comrades, it's with raised eyebrows I read your blogs when for years where were you when various governments all political stripes been giving away all we's cherished most prime private islands to cruise ship corporations other foreigners of all stripes. I I get the impression you cares very little about what is happening with how our our beautiful islands and beach jewels - allowed become unwelcoming we natives.We need new thinking kinds peoples take-back we islands, beaches and Freeport reconciliation government. Amen!

Dumb activists. . .for the most part. . .they need to get up of their asses and put their minds to national use and stop "stroking their self-important" concept of themselves and do something useful!! Don't eat shark. . .don't eat turtles them. . .don't this or don't do that. These jack asses persons with their self-important hips are too stupid to see the city for the smoke it seems! For example, whale activists allow them peoples them who eat whale as a part of their culture to catch lil bit of them and them whales are very endangered. . .as with them people them who do the turtles. . .or them Chines them are still allowed to eat shark fin soup!! Their activists them seem to have some sense and less "elitist" in their thinking!! But no.. .but our activists them "cut the whole thing out" mentality just goes too damn far till it een funny!! Tell them activists them to go get a real job. . .SHUT THE HELL UP!

Ma comrades, you shouldn't have be a registered activist to express disgust that a water park's slide will be the tallest in the entire region,,,, too tall ever see little native child sliding down that slide. Maybe they will have special invite the native children days when the private island is empty of paying cruise ship passengers. For F#uck sake this is so reminiscent pre Pindling days coming to power, Time for a retake we islands and beaches back kinds: t's the People's time Revolution! What are we allowing to be royally done we the natives... all done under the red shirts governing lies of: It's the People's time!