Conviction thrown out for attempted murder of teacher 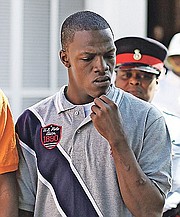 A SUPREME Court judge has rejected a jury’s attempted murder verdict against one of three men previously tried for the murder of former Queen’s College Elementary teacher Joyelle McIntosh.

Justice Bernard Turner dismissed the jury’s unanimous guilty verdict against Armando Sergeant, after his attorney previously challenged it due to it being inconsistent with another conviction stemming from the same matter.

The judge’s reasons for dismissing the jury’s verdict will come at a later date, The Tribune understands.

In December, a 12-member jury returned unanimous guilty verdicts for Sergeant and his two co-accused, Johnny Mackey and a teenager, on the charges each faced of attempted murder, conspiracy to commit armed robbery and attempted armed robbery.

Unlike his two co-accused, however, Sergeant was found not guilty of murder by a vote of 8-4, but was found guilty of the lesser charge of manslaughter.

Subsequent to the jury’s verdicts against his client, and as well as earlier this month, Sergeant’s attorney David Cash argued against the “complete logical fallacy” of his client being convicted on both manslaughter and attempted murder.

Conversely, however, he said the guilty verdict for the charge of attempted murder suggested he did have the requisite intent.

Mr Cash also stated that based on the evidence, his client was not the shooter. Thus, he claimed, the attempted murder charge should be done away with.

Director of Public Prosecutions Garvin Gaskins, assisted by Akeyra Saunders, responded at the time by questioning if Justice Turner, having accepted the jury’s verdict on December 12 and consequently discharging the jury, can revisit the issue without running afoul of the law.

He thus suggested, among other things, that Mr Cash should have sought to convince the court at that time not to accept the verdict concerning attempted murder, and that his client will have to take the matter up elsewhere.

Mr Gaskins further suggested that based on his submissions, Mr Cash was essentially telling Justice Turner that although he accepted the verdict, he should not accept it at present.

In December, a 12-member jury returned a guilty verdict of murder for Mackey as well as the teenager accused in the matter, who cannot be named because he was charged as a minor.

At the time, Crown prosecutor Viola Barnett indicated the Crown’s intent to seek the death penalty for Mackey.

During trial, the jury was told the teenager, who was 17 at the time of the incident, along with Mackey and Sergeant attempted to rob McIntosh of her 2009 silver coloured Toyota Corolla worth $6,000.

All three had denied the allegations.

During trial, however, Crown witness Detective Sergeant Kendra Wallace said the teenager admitted to shooting the fourth-grade teacher when interviewed on November 20, 2015, at the Central Detective Unit (CDU).

Regarding Mackey and Sergeant, Det Sgt Wallace further said in her testimony how both men, in their records of interview on November 18, 2015, told officers the teenager was the one who shot McIntosh.

Det Sgt Wallace said Mackey – who the Crown charged was the person laying down in the middle of Parkgate Road on the night in question, thus causing McIntosh to swerve to avoid hitting him – admitted he did so but said it was because he caught a “cramp”.

Meanwhile, Sergeant, she said, admitted to having knowledge of the offence but denied shooting the deceased. According to Det Sgt Wallace, Sergeant said he saw when Mackey dropped to the ground and said he knew it would be a robbery.

As the car got near, he said the teenager approached and subsequently shot the deceased.

However, subsequent to the closure of the Crown’s case against them, all three convicts took to the witness stand and claimed they were all beaten by police to give false confessions concerning their alleged involvement in the crime.

Sergeant, in particular, claimed he was given a proposal by police so that he would identify the teenager as the shooter in the crime. After he denied the proposal, Sergeant said he was beaten and had a bag placed over his head by officers to coerce him to comply.

Sergeant said he was ultimately made to sign documents pertaining to the initial interview, the contents of which were not true. Nonetheless, Sergeant said when he was arraigned for McIntosh’s murder on November 23, 2015, he was charged with three murders.

However, he said the other two murder charges were later dropped.