Pm: I Was Right To Sack Chipman 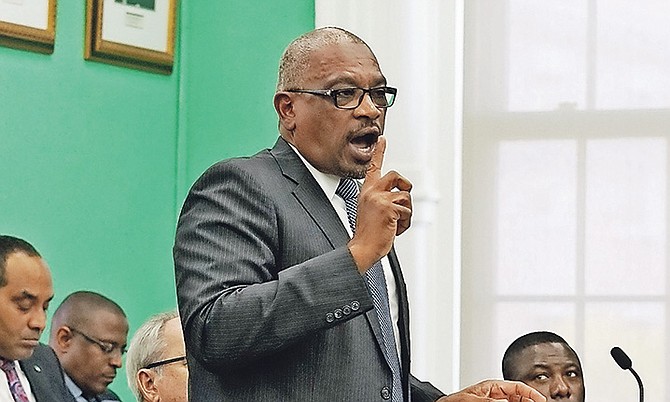 WHILE telling reporters he will not reveal some of the details surrounding Centreville MP Reece Chipman’s firing as chairman from a government corporation, Prime Minister Dr Hubert Minnis said he did what he believed was “right”.

This decision he said will not hurt his relationship with Mr Chipman, who was on Saturday fired by the prime minister as chairman of the Antiquities Monuments and Museums Corporation.

“I do what I think is right,” Dr Minnis said yesterday. “You voted for me to do a job. I told the Bahamian people that if there is any undoing or what I consider against our policies in either party be it the Progressive Liberal Party or Free National Movement, then we would deal with it appropriately. We (are) just dealing with society.

Dr Minnis made the decision after giving the MP an ultimatum to either tender his resignation or be terminated.

However, Dr Minnis said he could not divulge details because he had not yet informed his Cabinet. It is unclear what the prime minister meant as the Cabinet Office issued a brief statement on the firing on Saturday.

In an interview with The Tribune Sunday night, Mr Chipman said he had high expectations of the Office of the Prime Minister, which were not met, but added he regretted that things had escalated to this point. He also said the civil service is filled with “political prostitutes” which will hinder forward movement unless this problem is weeded out.

Asked if he had concerns about this, Dr Minnis said yesterday: “I don’t know what that means. I don’t use the word prostitute so I would need that broken down.”

He also said: “No (I am not concerned). I always say whatever I do, I put God first and I am led by my conscience and once my conscience is cleared, I’m happy. The FNM made a commitment. We said we would govern in a certain manner in a certain way.

“We said we would root out corruption and bring honesty and integrity into governance and that we will do, we will stay the course, nothing will change us.”

However, Mr Chipman refused, stating in a letter sent to the prime minister and parliamentary colleagues ahead of his axing that he would only do so if Permanent Secretary Jack Thompson and several other high-ranking government employees at the AMMC also submitted resignations.

He further claimed the AMMC was operating outside of the law and also suggested the government was following the status quo of the previous Christie administration.

When asked if there was any bad blood between him and the prime minister, Mr Chipman said Sunday: “I don’t know where he is with it. I just know from my perspective I just had higher expectation of not him in particular, but of the Office of the Prime Minister and I think that’s where the line is for me, my expectations were not met. It’s a difference in expectation. I wish him all the best with his role and, of course, I wish my administration the best moving forward but there is a level of expectation one would expect when we look at public service and higher office and in that regard, I think there is a lot of work to be done.

“It’s always regrettable when any organisation or administration gets to the point where obviously whether there is a lack of communication or just a lack of attention is given to certain areas,” he said when he was asked if he had regrets.

He continued: “I think that the letter (sent to the prime minister) spoke to campaigning against a system and when a system of governance is filled with what I term political prostitutes it’s going to be difficult for us to move forward unless we rid ourselves of that type of injection in the public service.

“I think it’s important for the constituents of Centreville to know my take on it. And it’s also important for you to, in terms of the fairness of reporting, to understand both sides. Because the prime minister will have to say his interpretation of what transpired, I don’t know whether he will or won’t and then I guess we’ll have an opportunity to clear the air at some point.

“But it is important for us to acknowledge that we have a tough job. I do understand that the prime minister has a tough job. I do understand our administration has a tough job, however, there are some little things that are important. Like respect, like adequate relevant communication, clarity with regard to the law and with regard to corporate governance principles. Otherwise what will trickle down is a bunch of foolishness and that is not something I am going to be good at tolerating,” Mr Chipman said.

In his letter to Dr Minnis, dated March 23, Mr Chipman said his request for the resignations of Mr Thompson, Deputy Permanent Secretary Carol Johnson and Director of AMMC Dr Keith Tinker were based on several concerns, which he claimed were brought to the attention of AMMC’s board of directors.

Looks like Minnis just decided on his own, without consulting his cabinet, to continue paying the prostitutes at AMMC. Chipman played Minnis like a well-tuned fiddle, exposing the dimwitted Doc's worst traits for all to see - an inflated ego accompanied by arrogance!

What is the reason for Minnis to not take Chipma's advice concerning those "entitled" civil servants at AMMC??????? ....... HMMMMMMMM

MAYBE CHIPMAN IS OUT OF HIS LEAGUE AND HIS ARROGANCE AND INFLATED EGO PUT HIM IN CONFLICT WITH HIS ADMINISTRATIVE TEAM!

I think bringing up "prostitutes" is a smoke show to detract from Reece's own rumored failings and conflicts he inflicted on the staff of AMMC as a whole. Rumors of disregarding public service guidelines for human resources, demeaning and subverting behavior to management, etc. I don't know if he intended to actually improve, but it sounds like a child attempting to fix the world before taking a history lesson. Even good intentions don't save Mr. Chipman.

The PM would be well advised to listen carefully to Mr. Chipman.

The PM needs to take some very difficult decisions, and clean out many top civil servants, if he wants to get this country going.

The civil service, as it now operates, is pulling this country down, is the reason there is so much unemployment.

Chipman did not mince words in his midterm Budget report ......... He asked some direct and hard questions that would have made Minnis and the Cabinet squirm ...... Maybe that was all a part of the firing ........ This feels like DocRollins2.0 all over again.

doc does not know right from wrong even if it hit him in the face. after he signed a disterous contract and then signed a ceremonial contract to fool his people.

Apparently no one told doc that lying is wrong so he continues to do so, doc thinks he is Trump. so the others should be aware. Doc and Chipman Just alike. doc day will come soon enough when he will be fired and topple from his self appointed throne.

If Minnis is so right and so ‘conscience clear’ about the firing then why not reveal the reasons and let the public make their own minds up about it.

BECAUSE OUR LABOUR LAWS, CONFIDENTIALITY LAWS, CHIPMAN WILL SUE HIS BACKSIDE IF HE DOES, IT IS NOT ETHICAL TO DO SO. . .MUST I GO ON?

Chipman is not stupid, he knows he can use this to his advantage to create a perception of him being a real victim.

The PEOPLE will determine if the PM was right to sack Chipman or not once all the evidence is before them!

Until then we wait!

And the village grows by one more person who refuses to see sense. . .can some body go and get our "one-horse" for this here town. . .lets take turns riding it so. . .since there is only one horse in this silly town!

There is doc again with that threating finger. Mr: Cooper should be afraid of him, because who know what doc will do from one day to the next.

Red Shirt blue shirts if ya don drink my kool aid i ga fire you like the great cheeto in the north.....

Ma Comrades, the PM, KP, Jeff L, Dionisio James and Carl Wilshire are never shy tell-all transparency gory details why those known and thought to have ever in their lifetime been connected to the former PLP government got fired............... but they're on different transparency agenda when it comes firing one they own red shirts. {You has no, I did not just create in my upstairs the four above mentioned red characters}.

Ma Comrade Sheeprunner12, I was neither surprised nor disappointed by loss PLP as government.... still I was open to new progressive think out colonial box red regime...... but it's just not happening among the 35 reds sent to House as MP's.

Tla we all know that the "red lite" een shining where you are. . .but if you take the top off that yellow box you down in with the cover shut. . .YOU MAY SEE THE GREEN LITE TOO!

My take on "fees for services" is, it really doesn't matter how much a person charges. It's for the customer to determine IF they can pay it, if they're getting value and if they want to pay it. Now, since the customer is "the People" we'd have to know exactly what was involved in the entire branding exercise, was it just the logo? Or was this an entire marketing exercise? Even the design of a single logo can involve a good bit of work

In general though , the logo concept doesn't appear to represent the brand, they made it bright and shiny but it's representing "antiquities" and "museums" and "history"...the logo should have somehow given the feeling of age and esteem

Let’s hope that these (OBan screw up and the firings) are growing pains in the learning and cleansing process towards better governance. But one really couldn’t rationalize Dr. Duane Sands alert on the shortage of essential drugs at the hospital. Was he trying to blame the former government or highlight the shortcomings of his own government?

If Doc has the authority to fire chipman, thats the end of it. no need to explain. i don't recall any explanation when the appointments were made, so no need to explain when u let them go. Look at America, which President in history has fired more people than Trump? wakeup Bahamas, this is the way it is. Get to grips with it.

With all due respect let us not look to America or Trump for aspiration.

So where do we look? Definitely NOT in this "jacked-up" nation. . .a people too blind to see their hands right in the front of their faces. . .or should I say only not from persons on this site. . . we act like we have perceptual dyslexia. . .comobit with political echolalia! But I find it strange that this is the same MP that the PLP was accused of putting him on social media having sex with another man! Yall got yinna morals all mixed-up and dirty with politics so bad that most of yall can't be honest to save ya life. . .much less run this nation. . .

I am waiting for full disclosure from Chipman not the current name calling. The slurs are a bad look and doesn't give him credibility.

Indeed ......... This is going to get more twisted as more details emerge