Judge Delays Summation In Double Murder Trial Till Next Week 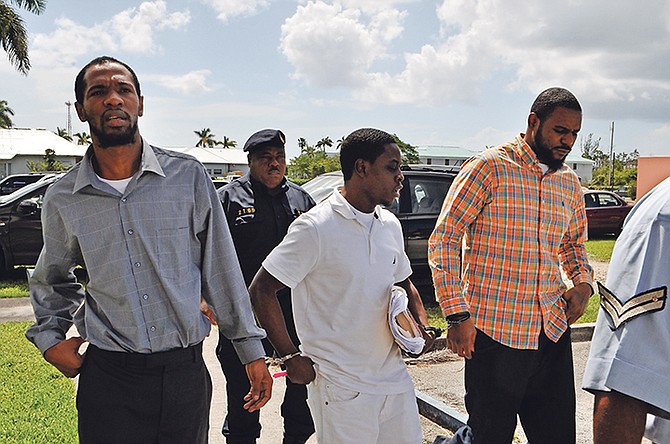 JUSTICE Estelle Gray-Evans has put off giving her summation in the double murder and armed robbery trial of three men in the Supreme Court to next week.

The judge was to deliver her summation on Friday, but told the court she was not in a position to give her summation and adjourned the matter to next week.

She then instructed jurors to return to court on Wednesday, May 9 at 10am when she is expected to proceed with the matter.

After the judge gives her summation in the case, all the evidence is turned over to jurors who will begin deliberations until they are able to reach a verdict.

On Friday morning, a number of armed police officers were stationed outside at the courthouse.

Paul Belizaire, Devaughn Hall, and Kevin Dames are on trial for the murders and armed robbery of Barry and Sheena Johnson. The couple was discovered shot to death at their residence in Deadman’s Reef in September 2015. Their truck and a set of keys were also stolen.

Mr Johnson was a supervisor at the container port, and his wife, Sheena, was a teacher at the Eight Mile Rock High School.

Four masked armed men held the couple at gunpoint at their triplex apartment on the evening of September 12, 2015. Their bodies were discovered by a tenant early the next morning.

The trial began in October. Two co-defendants Alan Alcime and Virgil Hall accepted a plea deal offered by Office of the Attorney General to testify as witnesses for the Crown. The murder charges were dropped against them and they pleaded guilty to the armed robbery. Both are serving time in prison.

Belizaire and Devaughn Hall, who are represented by attorneys Geoffrey Farquharson and Jethlyn Burrows, respectively, decided to remain silent. Kevin Dames, who is represented by Carlson Shurland, gave evidence in the witness box.

Prosecutors Neil Brathwaite and Erica Kemp of the Office of the Attorney General appear for the Crown.