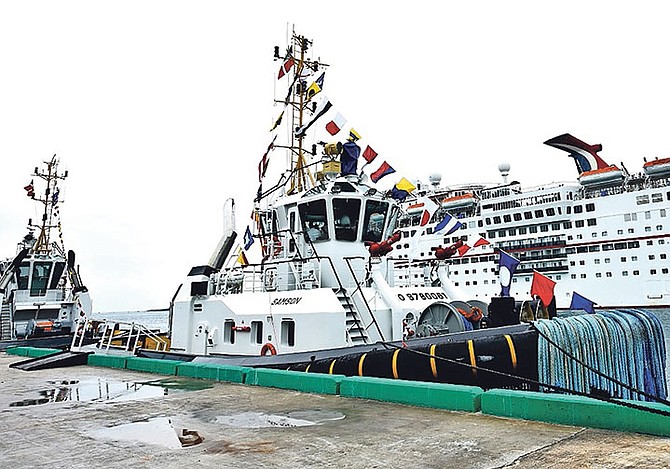 "The Government of The Bahamas entered into a 15-year contractual lease arrangement with Tug Services Limited, beginning April 1, 2018," he added.

"These are the kinds of public/private partnerships which help to provide certain necessary services. The agreement calls for Tug Services Ltd. to provide two 50-ton bollard pull, Azimuth Stern Drive, tug boats, on a daily time charter. This includes: management services, crew, firefighting, oil spill recovery, salvage capabilities and vessel maintenance for tug services at Nassau Harbour and Clifton Pier. With its world class equipment and experienced Bahamian staff, Tug Services Limited has the task of providing tug boat services 24 hours per day, 365 days per year for the next 15 years to ensure the safety and enhance the competitiveness of Nassau Harbour and Clifton Pier. This includes reliable service during poor weather and in emergencies."

Transport and Local Government Minister Frankie Campbell said though the 15-year contract will cost Bahamians $4m per year, the country will make an annual return on that investment, although it is not clear how that will happen.

"The government of the Bahamas has permitted to pay Tug Services LTD in the area of $4m per year," he said, "however we will raise almost twice that much so at the end of the day the Bahamas government will recoup the necessary funds to pay that $4m and probably get a profit of nearly $3m. When you consider that without the headache of crew, ship maintenance, etc, its a win-win situation for us."

"It wouldn't make sense for us to be maintaining two ships while we try leasing two ships," he said.

Nonetheless, the government's plan to introduce a "mandatory tug boat fee" has been met with opposition from commercial shippers and cruise lines.

Michelle Paige, the Florida-Caribbean Cruise Association's (FCCA) president, said the industry was "fundamentally opposed" to paying for the service in Nassau Harbour.

"The industry supports paying for services that it needs," she said. "However, in this case, our member lines tell me that tug service requests are not needed in the Port of Nassau, and that the existing fleet of tugs was adequate for the exceptional use by the industry."

All the peeps are happy they got the contract sewn up for 15 years - i can't wait till one of the boats breaks down and needs to be fixed - we gonna see any of that $4 mil a year being spent to keep up???? Doubt it seriously. . . . but the cronies are happy

They knew they could not get enough tug traffic to pay back the 4M a year lease, so they made a mandatory 'tug fee' for any commercial vessel entering the harbour. With a good 'pilot' on board, our harbour is easy enough to get in and out of with the technology in most of these boats these days...without a tug. We will be the only country bar 1 in the Caribbean market that charges a mandatory tug fee. I realize we are in the Atlantic...but we compete with the Caribbean cruise market.

I like the names of the tugs but come on man these pilot guys have set up their own kingdom in the nassau harbor for years. maybe even since samson times!!!! with this kind of a monopoly they got the government to pay for their shiny new boats for their private business. but hey it's 100 percent bahamian owned right so it is ok right ha!

So what happens now with the Amber Jack, Tautog, and the Snapper?