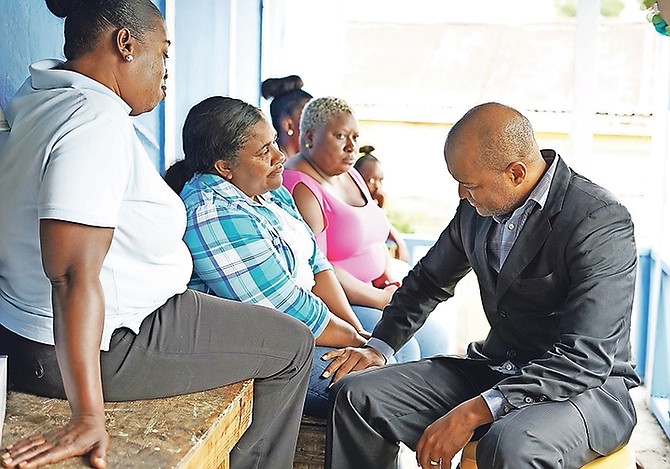 IN the wake of another police-involved shooting in his community, Centreville MP Reece Chipman is calling for the creation of statutory framework to investigate and examine police shootings.

The recommendation was made on the front porch of Beverly Lee’s home. Her son, 20-year-old Deangelo Evans, was purportedly shot 18 times by police on Sandy Lane, off McCullough Corner Sunday morning.

Outlining the proposal, Mr Chipman insisted the rise in police-involved shooting deaths across the country mandated the establishment of a state-run organisation focused on evaluating the circumstances of serious crimes involving police. He said the organisation would outline the specifics of each case and submit a report on its findings.

“I am looking for a report where we can see justice in action,” he told reporters.

Eight people have been fatally shot by officers so far this year.

According to reports issued by the Royal Bahamas Police Force Sunday, officers were responding to an armed robbery near East Street and Bethel Ground Corner when they travelled to McCullough Corner, and met Evans and another man sometime around 9.15am.

Police said the pair matched the description of suspects involved in that earlier robbery.

Those reports further indicated that one of the men produced a firearm. It is unclear whether Evans or the man he was standing with brandished the weapon.

The officers were reportedly in fear for their lives when they opened fire.

Evans was taken to Princess Margret Hospital where he later died.

Relatives maintained yesterday that he was not armed.

They also insist that he was searched by police on Sandy Lane, and shot during that process.

To that end, Mr Chipman said yesterday: “I am calling for a full report on the investigation into the shooting death of Deangelo Evans in the Masons Addition area.

“We have had quite a number of police shootings this year and it is time to put this in perspective.”

He continued: “All indications in Masons Addition show that it is just not enough to visit a family, and I am very happy to visit (and) go to a funeral, and have speeches or presentations. But we have to demand that our community remains safe and is protected by the full arms of justice.”

Referring to Mr Evans’ death, he said it requires both police and politicians to “live up” to their responsibilities and mandates of accountability and transparency.

“So as a member of parliament for this area I want to represent what is fair and what is just,” he said.

“We are not saying one person is right. We are not pointing fingers.

“We are saying that we would like a full investigation and a report so that our community can heal and heal properly.

“Also, it will help the officers of officer involved in terms of bridging this gap between the community and the police relationships,” he added.

“So we want this report so that we are able to know, well, was the police called?

“You know we have the body-cams that were, (Police Commissioner Anthony) Ferguson would have indicated that we had body-cams in November. I am not sure if they were tested or if they are in use.

“But, we want to know if body-cams were being worn so that we could know whether or not this family, who is grieving at this time, they can see what happened,” Mr Chipman said.

The United States’ Department, according to its official website, operates across four mandates, namely to ensure fair and impartial administration of justice for all Americans.

In October of 2016, following several police involved shootings, US Attorney General Loretta Lynch announced plans for the agency to collect nationwide data on interactions between law enforcement and civilians, including police shootings and in-custody deaths.

Current legislation mandates all police-involved shootings are investigated by Her Majesty’s Coroner.

Following that process, the matter would be transferred to Coroner’s Court for a judicial inquest.

As of last year, there were some 28 police-related deaths that required an inquest, most of which were “just there”, languishing in the system, according to Attorney General Carl Bethel.

When interviewed by The Tribune on the problem late last year, Mr Bethel could not say how far back the outstanding matters went.

If Evans did in fact brandish a firearm then to hell with a probe. The instant you attempt to/point a gun at law enforcement, you forfeit your life. This sounds like another case of "My good son" syndrome where the mother and community attempts to cloak a criminal.

If the young lad did not present a weapon (or if it cannot be perceived that he reached for one) then there needs to be a formal explanation and disciplinary measures/prosecution.

I would support the police if this was an armed robbery suspect aiming his firearm at the police. However, 18 times? Something doesn't seem right about this story.

While I agree with Mr. Chipman calling for the creation of statutory framework to investigate and examine police shootings, I do not agree with likening our country's rules and mandates to those of the U.S. D.O.J. No way.

Some say why 18 times. . .it's called neutralizing the threat. . .standardized military and law enforcement deadly force tactics. . .keep shooting until the threat is neutralized. . .or until the person drops the gun. . .or is dead and cannot present any more threat to the officer's life!! Black Ops and Special Forces use the "double tap". . .one to the head and one "center-mass" or center on the chest. . .both deadly spots and can result in instant death. . .some do move after the double tap. . .rarely, but there are cases where double-taped persons needed another tap center-mass!! So when they start shooting it is up to the persons getting shot. . .keep coming and you keep getting shot! Drop ya gun or any sane person will continue to shot you if you are a deadly threat to them!!