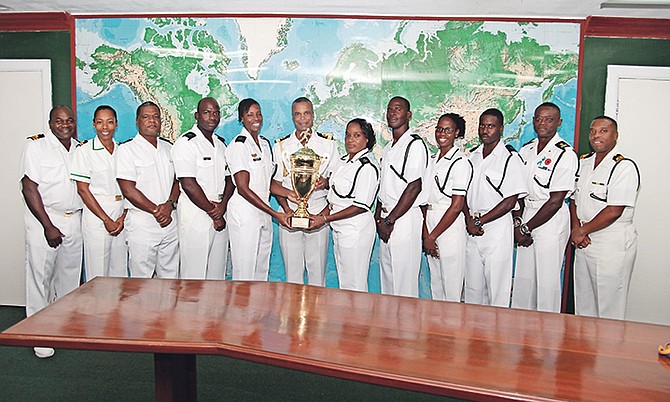 IN a special presentation at the Coral Harbour base, Royal Bahamas Defence Force Commodore Tellis Bethel was presented with the coveted floating trophy won by his officers in the inaugural 18th Annual National Public Service Week Fun Run/Walk and Health Screening Day.

The RBDF won the greatly desired award for having the most participants and winning the most medals at the inaugural event, which was one of many activities being coordinated by the Public Service Committee in recognition of those persons who have retired from the public service within the past year.

The six-mile road race commenced at the Botanical Gardens and culminated near the Melia resort, Cable Beach. Other groups and organisations from various government and non-government agencies throughout the island also took part in this event.

Participants from the RBDF included Marine Seaman Troy Seymour and Able Seaman Ryan Ferguson who placed second and third respectively in the male under-30 category.