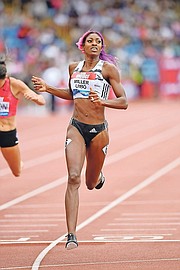 IN between the announcement of major off-the-track awards for her performances this year, 'Golden Girl' Shaunae Miller-Uibo will be back home this weekend to stage her second annual Bay Street Mile.

The Shaunae Miller-Uibo Bay Street Mile is all slated to take place 7am Saturday from the straw market on Bay Street. It will travel east and finish at the Bahamas Football Association's beach soccer stadium at the foot of the bridge.

David Ferguson, who is responsible for organising this year's event, said they are looking forward to some fierce competition across the board.

He also indicated that Miller-Uibo plans to invite some of her training partners and friends to come and participate in the event for the first time.

Miller-Uibo, still enjoying the success of her season that culminated with her triumph in the IAAF Continental Cup as a member of the Americas team, was unavailable for comments.

The announcement was made by NACAC president Victor Lopez, who congratulated Miller-Uibo, Jamaica's Fredrick Dacres and Brianna Williams, the respective senior male and junior female athlete of the year as well as Cuba's Jordan Diaz, the Junior Male Athlete of the Year. Miller-Uibo, 24, will be nationally recognised when the Ministry of Youth, Sports and Culture stages its National Sports Awards at 7pm on Friday, November 30 at SuperClub Breezes just before the Hall of Fame is set on Tuesday, November 20, at Government House.

Miller-Uibo, last year's female and athlete of the year, is in the running for those two honours again.

The voting process for the IAAF Athlete of the Year will be closed on Tuesday, November 13. But it won't be revealed until the Athletics Awards 2018 are held on Tuesday, December 4, in Monaco.

Voting for the Male World Athlete of the Year closes on November 13.

At the conclusion of the voting process, five men and five women finalists will be announced by the IAAF.

Miller-Uibo was undefeated in all competitions in 2018. After winning the Commonwealth 200m title in April, she won three races at her specialist distance of 400m - including a world-leading national record of 48.97 in Monaco - and then turned her focus back to the shorter sprint.

She won at the IAAF Diamond League final in Brussels and at the IAAF Continental Cup Ostrava 2018, capping a superb year which started back in February by equalling the world indoor best for 300m.