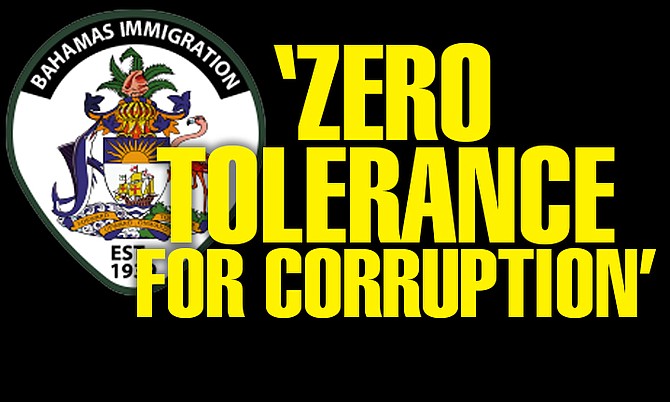 IN the wake of a two-year FBI operation that uncovered alleged bribery of officials at the Department of Immigration as part of a wider US visa fraud scheme, Director of Immigration Clarence Russell said he does not tolerate corruption.

He said anyone found breaking the law will face the consequences, no matter who they are.

His comments to ZNS News yesterday came after The Tribune exclusively reported on the FBI operation, which found immigration officials were allegedly being bribed to approve work permits that were later used to obtain US visas.

Yesterday, the US Attorney’s Office for the District of Columbia said it is still seeking two Haitian nationals living in The Bahamas to answer charges of conspiracy and visa fraud.

For his part, Mr Russell was adamant that significant reforms have taken place at the department since he assumed the helm that have deterred corruption.

“If we find that persons were taking it upon themselves to indulge in nefarious activity, they will face the full brunt of the law, plain and simple,” Mr Russell told ZNS. “Regardless and irrespective of who they are. It is totally unacceptable.”

He said he did not tolerate corruption during his 40-year career on the police force, nor during his tenure heading the Passport Office.

“Under no circumstances does my upbringing, my training or anything speak to the tolerance of anything that is wrong.”

“. . .Suffice it to say that many initiatives have been taken in the short period of time that I have been here that will seek to eradicate many of the issues of which they were previously confronted and bring total reform to the Immigration Department.”

The four, along with an unnamed co-conspirator, were indicted on September 25.

According to the US indictment, the group and others both known and unknown to the US, allegedly knowingly and wilfully conspired to commit visa fraud.

Operations were said to have started as early as January 1, 2015 and continued up to the time of the indictment.

Pratt, alias “Polena Sharmaine Pratt” and Pauline Johnson, and the co-conspirator are accused of seeking to unlawfully enrich themselves by allegedly fraudulently obtaining visitor visas for individuals to enter the US, namely Desir, Paul, and St Fleur.

The alleged scheme saw individuals pay the co-conspirator, who utilised Pratt to submit the applications to the embassy. Pratt is accused of having knowingly submitted false information, and also providing fraudulent documentation to those individuals to facilitate visa approval.

Paul travelled to Fort Lauderdale on a visitor visa on or about May 27, according to the indictment, which noted he remained in the US beyond the permitted six months.

The group was also served a forfeiture notice on any conveyance used in the commission of the offence.

The FBI’s undercover operation kicked off in 2016 after they were tipped off to claims St Fleur’s visa had been obtained fraudulently.

Edward Israel Saintil, the Haitian-Bahamian justice of the peace who made the claims of visa fraud in a series of recorded conversations with an FBI informant, is currently on bail in a high intensity supervision programme pending trial in Washington.

He pleaded not guilty to the charge of encouraging and inducing illegal entry into the US.

According to US court documents, Saintil obtained a two-year work permit for one informant, identified in the affidavit as CHS-3, as a handyman for his company, Saintil’s Painting and Cleaning Services on August 1.

The Tribune has withheld the name of the official, who it was claimed in the affidavit had signed the permit. Saintil alleged he paid the immigration official $3,000 for the permit.

He also boasted of close relationships with both current and former top immigration officials and claimed a capacity to obtain fraudulent bank statements to support US visa applications.

A government official, who spoke on the condition of anonymity, told The Tribune all information concerning the issuance of the work permit for Saintil, and other permits he may have applied for, would be on his file.

“He would have had to write a letter,” the official said, “and then if they don’t do a formal interview, they would interview by telephone and based on the interview they would do a summary about why they consider it a genuine application. The file would reflect all that.”

The official continued: “The application would go for approval to the director after everything is on file and if a senior officer is dealing with it, she can send a minute requesting consideration. That’s if it’s something they wanted to do quickly, or they put it on the agenda for the board meeting.

“There’s a prepared file on that,” the official added, “if everything is already on file, if the senior officer is sending a minute form it would state why they felt it’s a genuine application.”

Yesterday, Attorney General Carl Bethel was tightlipped on the bribery claims that were raised at the FBI’s probe.

Mr Bethel and Immigration Minister Brent Symonette are both out of the country on government business.

And Mr Russell did not speak to the allegations when this newspaper contacted him yesterday, but referred The Tribune to two press releases issued from the department last month on the establishment of its Complaints, Corruption and New Intelligence Unit.

Mr Russell said he could not provide any details, but noted there have been several matters brought before the police corruption unit since he took office on January 1.

The October 29 release from immigration officials stated the corruption unit was headed by a credible superintendent of immigration, “with quality support staff and the full support of the Royal Bahamas Police and other law enforcement intelligence agencies.”

The October release penned by Mr Russell continued: “While I cannot and do not respond to speculative remarks from any quarters, so long as this director serves at the helm of the Immigration Department, any and all complaints of corruption or irregularity will be investigated thoroughly and anyone found wanting through due process shall be prosecuted to the full extent of the law.”

Go Gettum Clarence, Always a straight shooter by all appearances.

Russell is either duplicitous or utterly incompetent - take your pick.

He said anyone found breaking the law will face the consequences, no matter who they are.

The solution to this in the Bahamas is to NOT find them. Remember how the police kept staring at the spinning wheel but couldn't find any evidence of gambling? Now today the gaming rep tells us their 600+ "LEGACY" locations have squatter's rights

How long has Mr. Russell been in the Immigration department? If it's been more than 2 years then I would take his "we don't tolerate corruption" with a fist full of salt.

I am sure there are one or two people who can't tolerate corruption. Which is just as well, because paying off the other 99.99% is both tedious and expensive.

Russell along with everyone that works at the Dept. (and the whole country) knows damn well this sort of trash is par for the course. This should be seen as a national disgrace and should finally push for REFORMS.

Who am I kidding, This is The Bahamas...

More than 50% of the Haitians supposedly residing as legal residents in our country today, whether as Bahamian citizens or work permit holders, are not legal residents at all. The papers they have to prove they are legal were obtained through bribery of government officials and therefore are bogus .....AND THAT'S A SIMPLE ENOUGH FACT. And just look at all of the problems this one invasive group of illegal immigrants have caused our country over the past three decades....our public school system has been ruined, our national healthcare has been ruined, our relationship with the U.S. has been ruined (U.S. now sees our country as another Haiti by a different name), and so on, and so on. LMAO

Ine see no one talking bout the Chinese paying $10,000 a head doe????? No wonder why so much Chinese here and getting all these concessions. $10,000 is pocket change to the Chinese. I think that is much bigger than the Haitian to do. Maybe because this dealing with the US is why all the light being put on the Haitians. What happen to our bahamas??????? What's going on with alllllllllllll the chinese work permits???????? Why our government aint addressing that???????? The pointe??????? Bahamar???????? All the new faces in John chea, Phoenix, golden Buddha, double dragon, an errywhere else the Chinese seem to be migrating????????? We can't go China an pay for work permit just like that........

Coincidence or what while luxury doesn't come cheap more than one comrade government workers, appoints and they family members can be seen scooting around Nassau Town dressed to nine yards behind wheels luxury fine motor cars to return back driveways homes beyond any Expect Ions they well known higher ups pay scales.
Just maybe when there are outward signs you be hobnobbing and live likes elite political and business classes does - you will need obtain financial certificate from auditor general that you came's by your sudden wealth by and within your own common man's or woman's financial reach?
Why expression likes it is sudden surprise only now when what we believe be true now is not something new under we Bahamaland's governing sun. Its well established tradition of Expect Ion best get instant pay pay raise. Amen, so true.

There always seems to be a conspiracy of silence within government agencies and corporations. Corruption in the Bahamas starts at the very top and permeates the entire system. Shame. No-one ever seems to have the ability, willingness or guts to even attempt to reign it in. Talk is cheap.......

"Mr Bethel and Immigration Minister Brent Symonette are both out of the country on government business." Hilarious!

Ma Comrade DDK, may I add, corruption began set in beginning with the who, why, what (WWW} behind financing red party's 2017 general election campaign.Take it from this comrade, recent evidence points to WWW?

It doesnt seem like any of the commenters before me read the case transcripts that's circulated online or outside news reports on this matter. Or you're all avoiding the elephant in the room, maybe with good reason. So will I, but I will say don't get too excited by this warning.

Lol. You said a mouthful. In fact it would be great if every time Minnis Turnquest or Newbold speak into a mic, they say the same. Can you imagine? Lol, we'd get more sense out of Minnis and KP than anything we've heard since May 10

"Mr Russell said he could not provide any details, but noted there have been several matters brought before the police corruption unit since he took office on January 1. "

This is so funny it caused my hat to fall off; so now i can't comment.