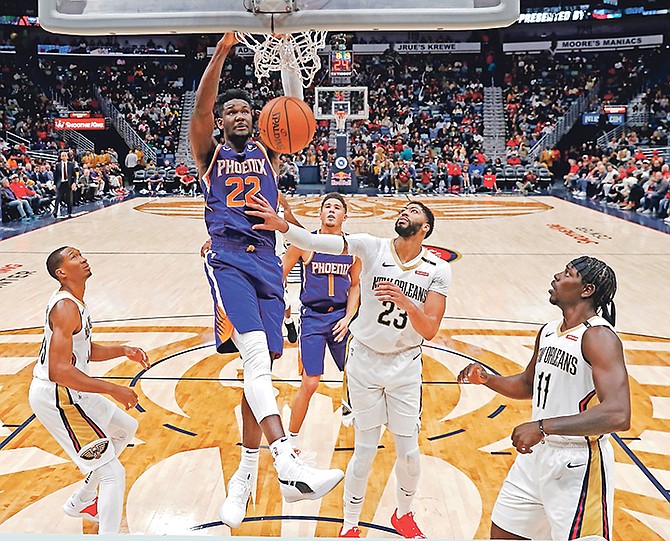 NEW ORLEANS (AP) -- Deandre Ayton scored 20 points and led the Phoenix Suns with 12 rebounds on Saturday night. But they were defeated by the New Orleans Pelicans 119-99.

It was the eighth double-double for the rookie No. 1 draft choice. He shot 9-12 from field goal range, 2-2 from the free throw line and also dished out an assist and had a steal in 30 minutes on the floor.

The Pelicans put together the winning streak they needed. After losing six straight while All-Star forward Anthony Davis struggled with a strained elbow, the Pelicans won their second straight.

Davis led the way with 26 points and 12 rebounds.

"It was real big for us," Davis said of the follow-up to a 107-98 home victory against Chicago three nights earlier. "You know you can't get too far down in the West or it's going to be trouble trying to get back up in the standings, so, for us to come back home and take care of home court, it was big time for us. It gives us a little confidence."

Julius Randle also had a double-double, finishing with 22 points and 16 rebounds. Jrue Holiday scored 19 points and E'Twaun Moore had 17.

It was the first time in 10 games that New Orleans had a victory by a margin of 10 or more points.

The Pelicans dominated on the boards, outrebounding the Suns, 53-37. The Pelicans scored the first seven points of the game and maintained a comfortable margin, but couldn't put away the Suns until midway through the fourth quarter.

"We had leads that we should have extended and tried to close out the game but we could never quite get there," New Orleans coach Alvin Gentry said. "The one thing about (the Suns) is they have a bunch of young guys who play hard, but they haven't figured it out yet. They have some great talent and I think they have a great future down there."

New Orleans led by as many as 24 points in the fourth quarter.

"We know that's a good team with a couple of All-Star calibre players," Suns coach Igor Koskokov said of the Pelicans. "So we can't just be lackadaisical and start the game without no energy. We were playing behind. We had a little spark in the third quarter, but that's not good enough to beat a good team on the road."

It was New Orleans' seventh consecutive victory against Phoenix. Booker came into the game averaging a team-high 26.5 points, but was just 4 of 12 from the floor.

"Every pick-and-roll was trapped," Booker said. "So good game plan by Alvin Gentry. (Holiday) is a good defender. It makes it hard on me."

Suns: Phoenix has won just one game since defeating Dallas 121-100 in the season opener October 17. . F T.J. Warren, who has come off the bench for most of the season, started for the second consecutive game. He started against Boston on Thursday and scored a season-high 29 points in a 116-109 overtime loss. Devin Booker beat the third-quarter buzzer with a 3-pointer from beyond midcourt.

Pelicans: F Nikola Mirotic and G Elfrid Payton both missed the game because of sprained right ankles. Mirotic missed his first game and Payton missed his seventh straight. ... New Orleans scored 33 points in the first quarter, the seventh time in 12 games this season that it has scored at least 30 points in the opening quarter.

F Julius Randle is usually the leader of the Pelicans bench, but he has been thrust into the starting lineup several times. He started three times in place of injured Anthony Davis during a recent five-game road trip.

He returned to the bench after Davis returned two games ago, but he was back in the starting lineup Saturday in place of injured Nikola Mirotic. Randle had 22 points and 16 rebounds. He has shot 64.9 per cent from the floor the last three games.