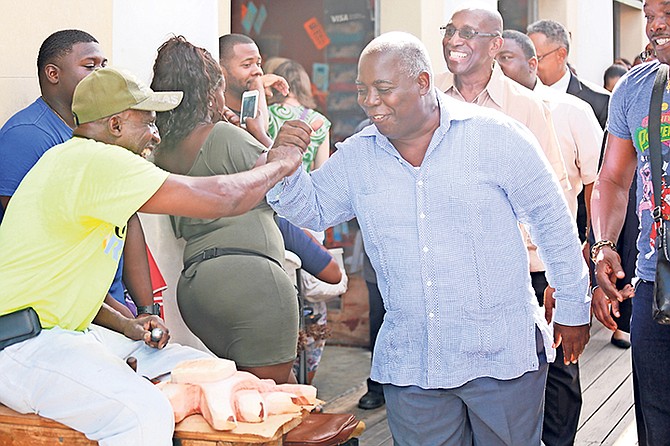 AS some straw vendors railed against "terrible" treatment from the government, Progressive Liberal Party Leader Philip "Brave" Davis said the Minnis administration should be more sensitive to the challenges the sellers face.

Mr Davis along with party executives conducted a walkthrough of the Nassau Straw Market almost a week after the Straw Market Authority reportedly decided to throw away goods from the stalls of delinquent vendors.

He said the move portrayed the government as uncaring and inhumane toward the vendors, who he described as the "backbone" of the tourism industry, adding the vendors should have been dealt with on a case-by-case basis.

"It's time for the government to take note of this industry and be more compassionate of them in their trials and tribulations," Mr Davis said yesterday outside the market.

Irene Rolle was one of the few vendors not afraid yesterday to castigate the government as many told The Tribune they were too scared to speak for fear of victimisation.

"That board up there? Listen, I hope after today they got to go. Every one of them get out. Just like they tell some of us," she said.

She was asked earlier to describe the treatment vendors are receiving. To this she and many of them said: "Terrible. They treat us like we are small."

"We just got light in here maybe two weeks ago and many of the tourists refused to come off the ship because they were told the market is too dark they are going to be robbed, raped and all these sorts of different things. So many of the vendors like my shop, it's lit up because of my investment before they go and turned the lights on."

For her, the market is also an embarrassing place to bring outside guests, noting it was "filthy" and needed to be painted and cleaned.

She was speaking of inviting guest preachers and speakers for an annual thanksgiving celebration, which she said was cancelled last year, but will be held this year.

Another vendor who did not want to be named said conditions in the market are at its worst.

"I've been in the market for 42 years," she said. "This is the first time in history I've seen us being treated like this. It's just terrible."

However, vendor Terez Ennis said she sees nothing wrong with the approach the SMA has used.

"If you are not paying your rent you know what you have to do," she said. "If you have stuff on a place for two or three years, if you ain't come to check for it that means you don't have any interest in it and that's how the story goes.

"What do you think will happen if you have a mortgage and don't pay it?

It I s true the Straw Market is dark. It was not built for a pleasant experience. the FNM Papa changed the plan. They should have built the place with the

look out tower. It is what is done with prime property you go up a story or two.

without vision the people perish.

$37.50/week should be seen as a gift, an opportunity. Does no one recall the years after the Market burnt down? Does anyone think how much it would be to rent a store, a corner on Bay St? How disappointing to read the mind set still reflects what holds back change, and independent thinking heartens swaggerts like Davis who seek this type of voter chained to gov't pork - or forgetfulness. Form a committee, take turns in cleaning, maintaining the Market, your place of business instead of complaining, waiting for another hand out.

Amazing that one vendor is put out she must invest her own money to light her own store! To sell her goods! Why celebrate a day of Independence if you aren't your own master?