INSIGHT – As Bill Clinton might say: 'IT'S FREEPORT, STUPID' 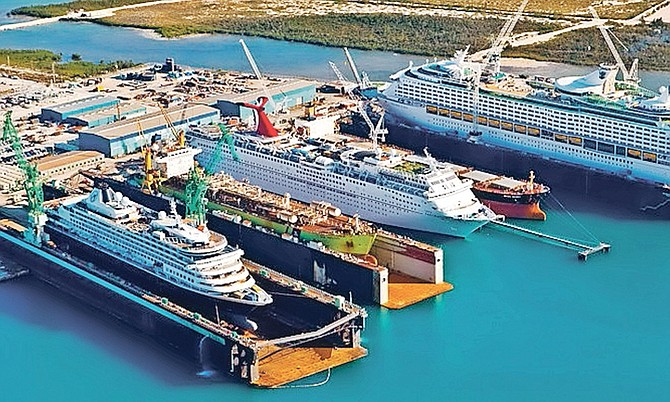 The vast potential of Freeport is still there, perhaps now more than ever.

FREEPORT, Grand Bahama was the first “Anchor Project” ever conceived for The Bahamas. It remains the most ambitious in vision and scope, the most potentially game-changing for our economy and the only one we ever really needed in the first place. The Magic City was designed to be an experimental economic space, a cradle of ideas and inspiration where, cut loose from the cumbersome weight of government interference, enterprises of every conceivable size, shape and description could flourish and not even the sky would be the limit.

In the 1950s and early 60s, Freeport led an unrivalled economic boom, one that likely would have persisted until today were it not for the scourge of political interference. What we have lost in terms of prosperity and progress for our people over the last 50 years, where we could have been today were it not for the small-minded bigotry of certain politicians, is truly frightening to contemplate.

The spectacular success of this open, free and dynamic economic experiment was seen by the myopic Pindling administration as an existential threat to its black nationalist revolution. Shortly after coming to office, the PLP found the Magic City guilty of treason and sentenced it to death.

What were Freeport’s crimes? That it was the brainchild of the white UBP oligarchy, was negotiated with and executed by white foreigners and hinged upon opening its doors to intrepid foreigners with revolutionary ideas. From the beginning, insecurity, jealousy and small-mindedness guided the PLP in all their dealings with Freeport. Crude racism and petty xenophobia blinded them to the enormous benefit for the entire Bahamas. Pindling and Co could not wrap their heads around such a daring concept, they were terrified of it, they were not in control of it and they could not corrupt it, so they decided to destroy it.

The weapon they used, as is so often the case, was the Bahamas Department of Immigration. Overnight, free movement was halted. All foreigners were made to beg on bended knee to be allowed to enter, licence a business or own property. Those who were too independent or outspoken were exiled, while the government seized control of all land use with the Immovable Properties Act. The iron fist of executive control descended, smashing the free exchange of people and ideas. The energy and dynamism of Freeport dried up instantly.

In the years since, subsequent PLP governments, as well as those led by its offshoot, the FNM, have done nothing to change this situation. Meanwhile, over the decades both parties have approved and given full support to dozens of other projects conceived and financed by foreigners across the length and breadth of The Bahamas, because these have been small in scale and therefore controllable and corruptible by the political class. Such projects however, have proven far more insidious to our national economy and character than Freeport could ever have been.

The term was coined by former Prime Minister Perry Christie for the Baha Mar project, which he announced would be the prototype for a series of new mega resorts in all populated islands. The idea was these resorts would serve as “anchors” for economic activity, epicentres from which spinoff businesses in tourism and service related industries could grow. Yet the fallacy of this concept should have been clear to the Christie Administration, which had an instructive example just a few miles east at the foot of the Paradise Island bridge. Once home to a vibrant array of shops, restaurants and other businesses, this area of Nassau was by then a ghost town – as was the vast majority of Paradise Island outside the gates of the Atlantis Resort.

The truth is, far from supporting the surrounding business community, a mega resort inevitably sucks the air out of it. The owners have enough money to be able to offer nearly all goods and services imaginable “in house”, hypnotising and drawing in consumers, visiting and local alike. Certainly, these resorts provide many jobs in a very limited range, but they also suffocate all diversity and ingenuity outside their walls. The fallout is even more pronounced in the Family Islands, where fragile traditional cultures and prized environmental assets are routinely sacrificed at the altar of profit – the vast majority of which is exported by the foreign resort owners.

My work in environmental protection will lead some to interpret the above statement as evidence that I oppose development. Nothing could be further from the truth. Environmentalists, myself included, know development must happen; what we oppose is a destructive approach that sacrifices all that is good and worth preserving across this beautiful and bountiful country at the whim of the foreign developer. Spreading anchor projects across the length and breadth of The Bahamas means the environmental fallout from accidents or irresponsible development practices, and the economic fallout should such projects fail, is equally widespread and no community is safe. A diktat comes down from Nassau that your island is next, and suddenly life as you know it is over and you have no more say in your own future or that of your children.

If development must happen, and development comes with risks, surely it makes sense to concentrate that risk in one place so as to better preserve the rest of the country for future generations. This is precisely the idea behind Freeport – an “anchor” tethering all large-scale industrial, touristic, agricultural and residential activity and the associated risks to a single location, thus allowing the rest of The Bahamas to be spared, even as we enjoy the fruits of Freeport’s bounty.

If we must build mega resorts, mammoth cruise ports and industrial facilities, what better place could there be than a city already fitted with amazing, world-class infrastructure, tailor made for large-scale developments and just a stone’s throw from the United States? Many of the developments I have bitterly opposed over the years would have received enthusiastic welcome from myself and other environmentalists had they been envisioned for Freeport.

This is not to suggest a free-for-all. Developers must still make a case for their project, show why it is beneficial to Bahamians and does not unduly put the environment at risk. The Oban oil refinery – a reckless proposal with potentially disastrous repercussions for the ecology of the entire Bahamas – should be rejected in Freeport or anywhere else. A project like Carnival’s proposed cruise port (not in our pristine East GB, but perhaps within Freeport), on the other hand, could be problematic elsewhere but is perfect for the Magic City.

The evidence has shown time and again that if we don’t have a national development plan for our own country, foreign companies will make one for us that will not be in our best interests. The Planning and Subdivision Act calls for a land use plan for each island but this is routinely ignored by government. Thankfully Freeport, under the Hawksbill Creek Agreement, already has such a plan and it covers virtually every type of development imaginable. All that needs to be done is for this plan to be promoted by the powers that be, allowing the Freeport to flourish once again.

Our government remains in the grip of a blinkered, anxiety-driven effort to keep the “invaders” out of Freeport at all costs. Instead, it should focus once again on attracting cutting-edge industries and experts in the greatest number possible. Were innovative minds in emerging fields such as artificial intelligence, robotics, nano-technology, renewable energy, biomedical industries, bioinformatics and analytics invited to take part in our audacious economic experiment in the north, The Bahamas would benefit tremendously from both the technology itself and the cutting-edge skills transfer to Bahamians. In particular, a skills boost to industries such as renewable energy and public sector technology could help address some of the key development issues facing The Bahamas today.

If the government must give incentives and concessions and roll out the red carpet for foreign entities, the beneficiaries should be the innovative and groundbreaking individuals and companies of the future, not the stagnant old barons of a mega resort model. Freeport could easily become the headquarters for numerous high-tech companies and at the same time home to the most daring and audacious tourism spectacles imaginable, the playground for the ever-growing Florida economy and an attraction to visitors from around the world.

The vast potential of Freeport is still there, perhaps now more than ever, and if Bahamians have the courage to harness it, we could revolutionise this economy while in a single stroke, ushering in a new era of enlightened environmental protection and cultural preservation across the length and breadth of The Bahamas. With a little vision, this could become a country of two national hubs – two “Anchors” – one political the other industrial, two centres of employment and opportunity, two paths to success and empowerment for each and every Bahamian to choose from.

The benefits for Grand Bahama’s struggling and neglected population will follow in droves. The nation’s second city would finally flourish, even drawing employment-hungry people from New Providence, thus helping alleviate the capital’s own underemployment and overpopulation issues. With a little vision, Freeport could become home to the most daring and audacious tourism spectacles imaginable, attracting amazed visitors from around the world. With a little courage, and a more liberal immigration policy that welcomes gifted foreigner experts, it could become home to a host of cutting-edge technologies – the Silicon Valley of the Antilles. What on earth are we waiting for?

Why not use Freeport as a testing ground akin to its original mandate and transform the city.

Allow easy entry with clear guidelines of how to open up shop.

When will we stop the mindset of thinking that everyone wants to come here! The hard fact is they do not! And we have to make it attractive if we ever want them and their money to be invested into our economy.

Imagine all the restaurants, the shops, the industry, the schools, the medical facility's and if the government is reading this........

IMAGINE THE NEW TAX BASE!

What very interesting read. It encapsulates the problems caused by our black majority ggovernments to the Freeport economy which the island continues to suffer from up until today. What is the difference between Singapore and the Bahamas? In a word corrupt PLP politicians. Actually that was three words.

A lack of innovative and fresh ideas coupled with a sub par education yields what we have now. Little progress and plenty of excuses.