I’M Just Glad To Be Alive, Says Diver After He’S Attacked By A Shark 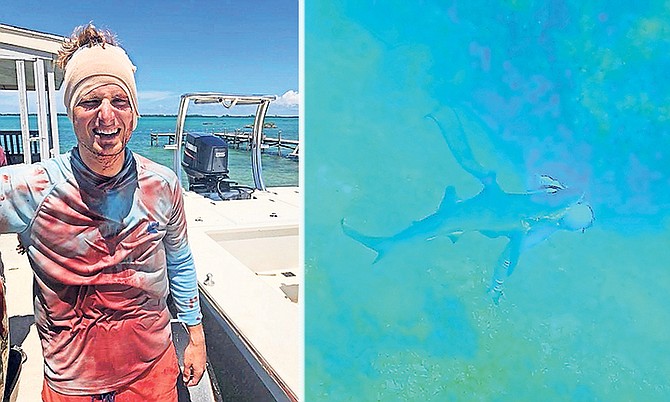 WILL Krause after a shark attack in August (photo taken from Mr Krause’s Facebook page), and a still from the video.

A MAN who survived a shark attack while spearfishing in The Bahamas this summer says he is “more grateful than ever” to be alive.

American Will Krause posted a harrowing video of the August shark attack and photos to his Facebook page on Thanksgiving Day, noting on this holiday weekend he was most thankful for “God’s kindness and protection” over himself and his family.

Mr Krause wrote on Facebook that he was 25 feet below the surface when the six to seven foot long reef shark “struck the back of my head and neck”.

He added: “I miraculously escaped with several stitches, some gnarly scars, and a viral GoPro video ... While encounters like this certainly shift your perspective, it doesn’t take a shark attack to recognise God’s generosity & intentionality in our lives (sic). May this Thanksgiving point you not just to the reality that you are blessed, but to the One who is giving the blessing.”

In about a minute long video of the attack taken by one of Mr Krause’s friends, a shark can be seen swimming towards Mr Krause shortly after his friend speared a fish. The shark bit Mr Krause on the back of the head and swam away, before the victim’s friend can swim to the surface and scream “shark” to other members of their party. Mr Krause is able to swim to the surface and onto their boat, cradling his head with his hands.

Mr Krause also spoke to an NBC affiliate about his experience, saying during the ordeal he did not even know he had been bitten by a shark until he got to the surface.

“I felt this huge impact on my head and my neck. I didn’t process that it was a shark bite until I got to the surface,” Mr Krause told NBC4. “I could see a lot of blood that was starting to pool around me so I was starting to get nervous that my time was up,” Mr Krause said.

When are we going to stop this uncontrollable growth of the shark population .......... Wondering which is worse right now .......... sharks or Dominicans.

What evidence do you have showing that the shark population is out of control and requires human intervention? Nature has done pretty well on its own.

Yeah sheep... your assertion is not solid.. and sharks are an essential part of the ecosystem.

How about the FNM??

It's their ocean that we swim in, and they keep the whole eco system in balance being that they are the top predators. Spear fisherman know that when they catch a fish they must get it out of the water and onto their boat as quickly as possible, as the distressed actions of the fish, and any blood will attract sharks in the area that they are diving in. Sharks don't have hands to feel things, so they have to use their mouths, which just happen to have a lot of very sharp teeth. If that shark had intended to harm this American tourist his injuries would have been far more severe (and reef sharks are not normally aggressive). World wide every year approximately 5 people are killed by sharks. Man kills well in excess of one hundred million sharks. The ocean, and the Bahamas need our sharks. Please just admire their beauty and grace, and let them quietly live their lives in peace.

LOL, dem foxtown sharks don't see many foreigners much. Ronnie needs to train them some manners.

Remember that God also directed that shark to bite you in the head. EVERYTHING is in God's plan.