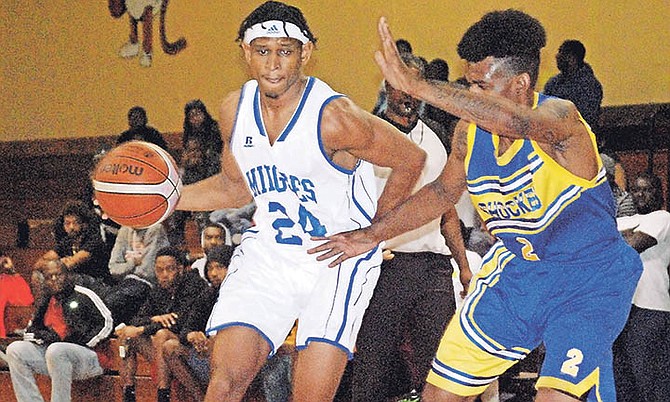 FOUR University of the Bahamas basketball players hit double figures as the Mingoes came back hard in the second half to defeat the JD’s Seafood Shockers 87-84 at the AF Adderley Gym on Wednesday night and now lead the division one standings in the New Providence Basketball Association.

Kemsy Sylvestre led the Mingoes with 25 points to go along with 13 rebounds and three blocks on the night for the University of the Bahamas squad that now moves to 4-0 in division one of the league.

Ramon Dames scored 13, Justin Smith 12 and Christoff McKenzie 11 for the Mingoes in the win.

Adam Johnson led the Shockers with 16 points and 15 rebounds in the loss. Also for the Shockers, William Rigby scored 14 to go along with 11 rebounds, Lenny Oscar dumped 13 points and both Shakwon Lewis and Jefferson Oliver each had 12 points. The Shockers held their largest lead of the game with a jumper from Oliver with about 32 seconds to go in the first (18-11). The Shockers would take that lead into the second quarter. The Mingoes would go on a 12-4 run to take the lead 23-22 off deep jumper from Dames with 7:19 on the clock. The Shockers would take the lead back to end the half 39-35.

The Shockers had a few looks to get back in the game but could not convert as the Mingoes go on to win 87-84.

“We started off a bit slow but we stuck to the game plan and that’s what paid off here for us tonight,” head coach Bacchus Rolle said. “We are beginning to trust the game plan and its paying off with us now at 4-0 so far in the season.”

Nichols, who again came off the bench for the third straight game, said he had a personal goal for the night and it showed in his numbers.

“We are just staying positive and staying disciplined and staying together and going hard to get these wins,” he said. “We know we could play way better than we did tonight so we know what we are capable of on the court.”

Rockets 93, Flyers 87: Crosley Wilmore had a game high 22 points to lead three other Sun Oil players in double figures as they won their opener. Wilmore, plsying 31 minutes, was 8-for-17 from the field, 3-for-8 from the three-point line and 3-for-7 from the free throw line. He also had four steals, two assists and a block shot.

In a losing effort for Breezes, Dave Davis led the attack with 18 points and 11 rebounds; Jeremy Nelly had 16 points, six assists and four steals and Devontee Gibson came off the bench with 13 points, 12 rebounds and a block shot.

Notes: The Mingoes next play in the league 9pm Monday December 17, 2018 at The A.F. Adderley Gym against the Caro Construction Pirates.

The Mingoes will also head to South Florida for a three game tour on December 12 against St. Thomas University, Florida Memorial University and Broward College.