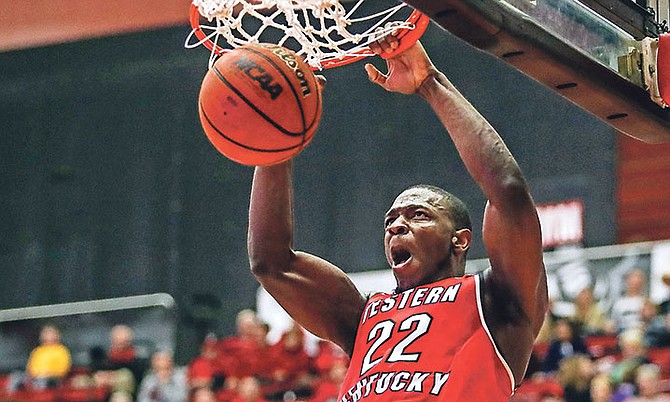 Dwight Coleby, of the Bahamas, scored 14 points and grabbed 10 rebounds for Liege Basket in their 80-69 win over Kangoeroes in Belgium’s Pro Basketball League on Saturday night. (AP)

DWIGHT Coleby tipped off his pro career in Belgium and made an immediate impact with his new club in his first night on the floor in Belgium’s Pro Basketball League (PBL).

Coleby posted a double double with 14 points and 10 rebounds for Liege Basket in their 80-69 win over Kangoeroes on Saturday night. He went 6-10 from the field and was a perfect 6-6 from the free throw line.

Liege Basket will face the fourth-ranked Antwerp Giants in the next round.

The PBL is the highest level of basketball in the country. Liege Basket is a one-time winner of the Belgium Cup and a two-time champion of the Belgium Supercup.

Coleby was a member of the Bahamian national team this summer just before he was named to the 2018 Las Vegas Summer League and minicamp roster of the New Orleans Pelicans.

He also participated in a pre-NBA Draft workout with the Utah Jazz.

Coleby averaged 11.1 points and 7.9 rebounds per game in his lone season as a graduate transfer for the Western Kentucky Hilltoppers in Bowling Green, Kentucky.

He posted a double double in the final game of his collegiate career, but the postseason run for the Hilltoppers ended in the National Invitational Tournament semi-finals in a 69-64 loss to the Utah Utes.

He finished with 10 points and 13 rebounds.WKU finished the season 27-11 and they achieved the programme’s most wins in a decade.

The Hilltoppers were the third programme for Coleby over the course of his collegiate career.

Out of the Piney Woods High School Mississippi, Coleby signed with the Ole Miss Rebels.

In his freshman season with the Rebels, Coleby played in 28 games with four starts and averaged 2.4 points and 1.9 rebounds per game in 10.4 minutes. He shot 47 per cent from the floor and finished with 18 blocked shots, fifth on the team. As a sophomore, he scored in double figures in six games and earned three starts in 34 games.

The following offseason Coleby planned to spend the 2015-16 season on the sidelines as a transfer to the Kansas Jayhawks, but he suffered a torn ACL in his left knee during a light team workout in October.

When he finally made his debut with the Jayhawks following a gruelling rehab process, he averaged 1.7 points and 1.8 rebounds per game in his lone season in Lawrence.

Coleby has been a member of a number of Bahamian national teams at both the junior and senior levels.