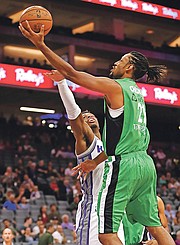 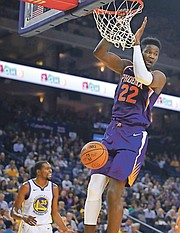 BOTH Buddy Hield and Deandre Ayton led their respective teams in scoring Monday night wins as the NBA preseason continued.

Hield finished with 22 points on a hot shooting 9-11 night from the field in the Sacramento Kings’ 132-100 win over Maccabi Haifa out of the Israeli Premeir League.

Hield made four three pointers and also added five assists and two steals. It was the first home preseason game for Sacramento after they opened with three consecutive games on the road.

Hield is averaging 12.8 points, 3.8 rebounds and 2..8 assists per game on 45 per cent shooting from the field and 47 per cent from three this preseason.

He also had 16 points and three rebounds in a 128-123 loss to the Los Angeles Lakers at the Staples Center in Los Angeles on Thursday night.

Ayton continues to be one of the more impressive rookies during the NBA preseason and led the Suns with franchise guard Devin Booker sidelined.

He finished with 18 points on 7-11 shooting while adding seven rebounds, two assists, two steals and a block in the Suns’ 117-109 win over the defending champions Golden State Warriors. Ayton is averaging a team leading 20.5 points and 11.5 rebounds per game on 59 per cent shooting from the field.

The Suns will have one final preseason game as they head to Portland on Wednesday to tip-off against the Portland Trail Blazers. This will be the second meeting between the two teams after the Blazers took a visit to Phoenix last Friday.

Ayton and Hield will face each other four times over the course of the regular season as Pacific Division rivals in the Western Conference.

The Suns will host the first of the four meetings on December 4 at Talking Stick Resort Arena. The Suns will also host game two on January 8. The venue shifts for game three when Hield and the Kings host the Suns on February 10 at the Golden 1 Centre. The final regular-season meeting between the teams is scheduled for March 23 in Sacramento.

Both of you young men make us proud!