WTO to impact 20% of economy

THE Government will forego $40m in revenue under its first World Trade Organisation (WTO) offer, its chief negotiator suggesting that accession will impact just 20 percent of the economy. 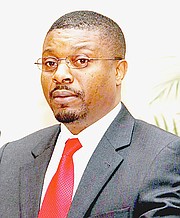 Zhivargo Laing, pictured, a former minister of state for finance, told a WTO symposium at the University of The Bahamas: "The WTO for me and our negotiators is a 20 percent conversation basically. Seventy percent of the Bahamian economy is essentially already free trading and in compliance with the WTO. I don't have to discuss that with anybody at the WTO. I'm not breaking any rules."

He added that roughly 85 percent of this nation's trade in services, rather than goods, and said the $40m in government revenue lost by eliminating or reducing import tariffs could easily be made up by cutting investment incentives by ten percent.

"Ninety-eight percent of the goods or products we import and export in this economy have nothing to do with protective tariffs," Mr Laing said. "Basically, when I go to the WTO to negotiate, this little slice, or two percent in terms of goods, is all the headache I have.

Mr Laing added that 72 per cent of this nation's services trade was already free. "Twenty-eight per cent is the headache; 15 areas that we have reserved for Bahamians, where we say foreigners can not participate in," he added.

"These areas include wholesale/retail trade, real estate, construction, legal services, import/export agencies etc. As we do the negotiations we have four areas, in particular, of ways to trade that we can offer for liberalisation." These, he said, include cross-border trade, commercial presence and the presence of natural persons.

Mr Laing again emphasised that the WTO is not about the free movement of people, and argued that full membership does will not lead to an erosion of Bahamian sovereignty. "If that were true, what are 164 countries doing in it including the US, China, Cuba and Germany? Why are 22 other countries still trying to join it. We can join it and leave when we want to," said Mr Laing.

"A part of this effort in joining the WTO is a strategic effort to grow and develop the Bahamian economy. A WTO environment will mean for many Bahamian businesses a reduction in their upfront costs. With WTO bringing down the tariff rate, it means businesses don't have to pay thousands of dollars in tariffs at the border.

"THE Government will forego $40m in revenue under its first World Trade Organisation (WTO) offer, its chief negotiator suggesting that accession will impact just 20 percent of the economy..."

NO Zhivargo, you idiot, THE PEOPLE OF THE BAHAMAS will foregoe $40m in revenue. YOU DON'T CARE because you can just raise VAT to 20%, and we have to pay it. Do you even live on the planet Earth, much less the Bahamas?

...now reading the rest of the article, I see what we get in return for our $40m is a pipe dream, a hope, a prayer, a chance, a possibility, and an "open market". I will take each one of those words written boldly on a piece of paper at the end of this month to BPL and ask them to strike off the balance on my light bill, because they are worth 40 million dollars - I will tell the cashier that she can keep the change.

Haven't seen you in a while. Welcome back to the asylum.

"we have four areas, in particular, of ways to trade that we can offer for liberalisation." These, he said, include ..... the presence of natural persons."

is this liberalisation of the presence of natural persons work permit relaxation?

and it seems the liberalisation to be offered is the removal of restrictions in areas reserved for bahamians. Tell that to the businessmen in those areas.

"will not lead to an erosion of Bahamian sovereignty. "If that were true, what are 164 countries doing in it including the US, China, Cuba and Germany?"

From discussions I've had, I understand that there are some initiatives that go along with this accession process that we will need to do anyway to modernize our economy. But looking at WTO membership of US, China and Germany for equivalencies, they in it and they ok so it can't be bad for us, is a big mistake, possibly the biggest we can make.

We don't have their power we don't get what they get we can't enforce what they enforce. And if we go into this believing we can negotiate just like them were doomed to fail.

Just look at what's happening in the real world today, those giants are backing up their official complaints with retaliatory tariffs and those tariffs are the REAL negotiators, they're hitting offenders in the pocket book immediately, where it matters, we don't have that leverage. We have to know who we are and what's realistic. We cannot assume that we will make a complaint and get immediate relief. Our complaint could be lodged with the body for decades by which time the affected entity is long killed off by the foreign dumping agency.

Absolutely right. Just like we demand to have top notch, safe food imported into the Bahamas. We just don't have the buying power to make any demands. We are a country the size of Miami. The talent pool, just by way of numbers, like our buying power, simply isn't here for us to get the best deal.