Another Fatal Shooting But Crime Figures Down 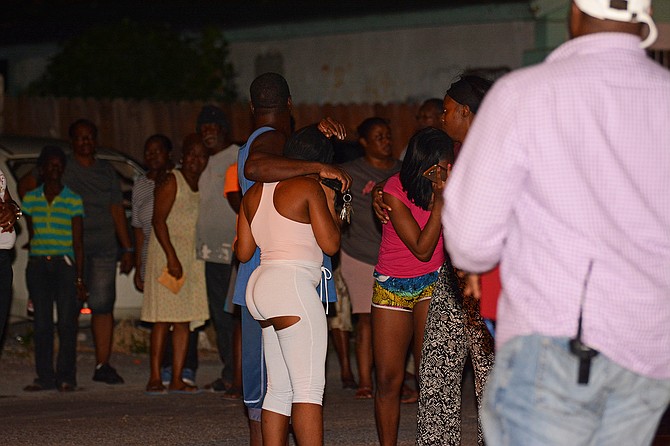 Residents at the scene of Tuesday night’s shoooting off Meadows Street.

A man was killed last night and another injured in a double shooting at Parker Street, off Meadows Street.

The incident came on the same day that Minister of National Security Marvin Dames said that officers were pleased that serious crime was trending downwards – while acknowledging there was “a significant amount of work” to do in fighting crime.

Police were on the scene of last night’s shooting as The Tribune went to press. It follows another fatal shooting on Sunday night off West Street in which a 34-year-old man, Jamaal McSweeney, AKA “Choppa”, of Dorsett Alley was killed. A second man was also injured in that incident.

Mr Dames’ remarks came as he addressed an armed robbery that took place yesterday morning in the Sea Breeze area.

“I don’t have the stats before me, but you’ve heard the commissioner (say) that serious crimes are down, at some point he’ll have an opportunity to share that with you.

“We are very pleased in which the direction things are headed; there is still a significant amount of work ahead of us but we feel confident that we are on the right track and no matter how much you improve, there will still be others out there who are willing to take advantage of others but we’ll get them because you know our job is to make this country safer. We’re committed to that as a government.”

He added: “We will continue to do whatever is necessary within the framework of the law to ensure that Bahamians and those who visit our shores are safe.”

“We’re introducing new technologies, refining the current technologies that we have on hand, we’re building relationships with our local stakeholders as well as external stakeholders so there are a number of things current happening that we are extremely pleased about, and we will continue to do that as we work towards making the Bahamas safer.”

“We are trending down,” Commissioner Ferguson said at an event at police headquarters. “I think everybody can see that from the numbers, in terms of homicides. We are not as high in armed robberies. Are we satisfied with the way armed robberies are? Absolutely not. We will do our best to make sure that we bring it right down.”

The commissioner also said that crime statistics will be released at the end of the year.

Crime figures down and the stock market down. Just about every stock. Amazon, Facebook, Ford , even marijuana,both medical and recreational and research are down. only oil prices at an increase (hello BPL). Do you know if they put a solar panel roof on every vehicle they can reduce the gas consumption for vehicles by 30% out right?

Whatever nonsense is projected about crime "trending" down is lunacy.

“I don’t have the stats before me, but you’ve heard the commissioner (say) that serious crimes are down, at some point he’ll have an opportunity to share that with you."

Pure and utter poppycock on the part of the so-called Minister of National Security.

why does that woman's pants have a hole in her butt?

She probably has one in the front as well. Jesus help our poor and ignorant as they know not how their dress speaks volumes about their future prospects.