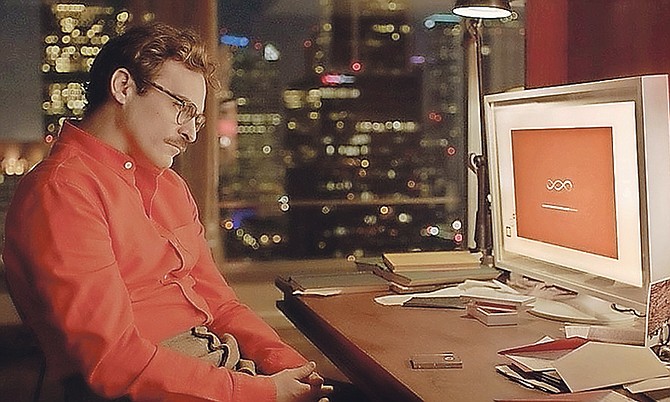 Joaquin Phoenix in the movie Her.

In 2013, the movie HER, the story of a lonely writer who falls in love with a computer, won the Academy Award for Best Original Screenplay. Simply saying that one Theodore Twombly fell in love with an inanimate object does not do HER justice. It isn’t that simple. It never is. And it especially isn’t given the implications we now know are connected with Artificial Intelligence. But five years ago, we were largely unaware of those implications and one day we will look back to the days of our innocence before AI and say ‘Back in the good old days’ which just goes to show how amazing the concept of the movie was, but back to the story, the love story.

Theodore, the protagonist, once worked at a smart Hollywood mag. He now earns a living writing love letters for others. He is also dealing with his own feelings of alienation after a split with his wife. Believing he can get his writing career going again by being better organised, he invests in a new computer with the first Artificial Intelligence software.

The male voice that comes on to configure the software asks him if he is social or anti-social, asks him about his relationship with his mother. In seconds, with a few more questions, the voice has figured out poor lonely Theodore and asks lastly if he would prefer a male or female voice? Theodore, clearly heterosexual, chooses the latter.

It is the voice of Scarlett Johansson who opens the conversation with “Hellooo, I’m here”. The voice is rich and warm, inviting. “How ya’ doin’?” she asks softly. Her tone is comforting, almost silky. Theodore sits up straighter. Someone is paying attention to him. “It’s really nice to meet you,” he responds. You can almost feel the gulp in his breath. “What do I call you?” he asks. She tells him Samantha. He asks how she came up with that name and she tells him she reviewed 180,000 names and liked Samantha best. He is amazed, how could she review 180,000 names that fast and she tells him it was even faster. Taken by her speed, intelligence ignoring the reality that its DNA is artificial intelligence and he should have expected nothing less. He summarises the dilemma that lies at the heart of the romance that unfolds: “You seem like a person, but you’re just a voice on the computer.”

The relationship grows, scenes get more serious, steamier. At one point, Theodore ends up on the beach re-living the love he felt for his wife, the birth of their firstborn, what it was like holding the baby and Samantha, the AI voice, wishes she knew what it felt like to be on the beach with this sensitive oh-so-vulnerable man.

It took the genius of Spike Jonze, screenwriter and director, to pull off the phenomenon of a Theodore Twombly (even the dorky name is brilliant in its positioning of the character’s vulnerability) falling in love with Samantha, a voice on a machine. Had it not been for Jonze’s brilliance, the script could easily have ended up in the bottom pit of a pile of detritus produced by those who dream of making it in Hollywood. Instead, it continues to rank among the top 15 love stories of all time.

In 2014, Popular Science magazine published a story “Can a human love a computer?” The question does not seem relevant to those of us who every day just try to show our love to the people closest to us, our spouses, our children, extended family for whom we are making dinner, applauding an accomplishment, achieving a goal.

But both the movie and the question posed by the article in Popular Science force us to examine the relationship we humans have with things. What happens to us as a people if the things we rely on like our smart devices, cell phones and iPads take so much precious time away from the humans we love that we have too little time left? What happens to us as a culture if we allow our children to become so hooked on video games like Fortnite that they would rather play online than talk to us at dinner? What happens if that addiction makes them more isolated, what if it lessens their social skills and their desire to interact with others?

As the presence of artificial intelligence looms larger every day, deciding for us what ads we should be exposed to when we are researching online, what events will interest us, what sales we need to know about, what our very tastes are, what freedoms are we losing? Is ai a risk or blessing of a combination of the two?

If, for a while, Theodore Twombly’s loneliness was eased by a voice on a machine, will there be a day when a generation of humans so connects with things like AI that connecting with people seems more complicated than it is worth?

Relationships with humans aren’t easy. If AI wanted to lure all of us into addiction to a relationship with a voice on a computer, would we have the ability to outwit it? It’s a scary proposition but not totally without possibility which is what makes it even more frightening. That’s the thing about Artificial Intelligence – it is smarter than we are.

So we must arm ourselves by asking how do we get back to connecting, one on one. Maybe we will never return to the old world ways of sitting on the porch after Sunday lunch, but maybe we need to try harder to just connect. Whatever it takes. Maybe it is harder when there is so much competition from what bombards us with the real news, the fake news, the fascinating and the false, the promises of being in the loop when we need to be in the here and now.

Competing with a Samantha, a voice on a computer, was just the beginning. Competing with love robots will open a new world of artificial promises to ease the pain of loneliness. The challenge of keeping AI where it belongs is going to harder.

Maybe we just need to put down the devices and look up at a sunset in The Bahamas and hold the hand of the one we love.