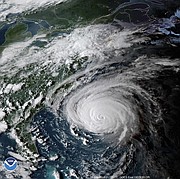 IN addition to large sea swells, Hurricane Florence is set to have another impact on the Bahamas in the form of an uptick in cruise visitors, due to major cruise lines redirecting their routes out of the storm's path.

Cruise companies such as Norwegian, Royal Caribbean and Carnival Cruise Lines have all had to change their itineraries due to the powerful Category Four storm which is expected to make landfall in the Carolinas today.

Consequently, thousands of passengers have been rerouted to the Bahamas from Bermuda.

Norwegian's "Norwegian Escape" left New York on September 9 and was initially scheduled to visit Bermuda's King Wharf, Newsweek reported. Now the 4,000 people aboard the ship are on their way to Nassau and Great Stirrup Cay instead.

Royal Caribbean's "Grandeur of the Seas", a 2,446-passenger ship, has also changed its itinerary from Bermuda to the Bahamas. That ship left Baltimore on September 8.

Carnival's 2,124 passenger "Carnival Pride" left from Baltimore as well and has had to change its destination from Bermuda to the Bahamas.

According to international reports, Oceania Cruises' 684-passenger "Sirena" will also stop at Nassau on Saturday as it makes its way to Miami from Europe.

The Bahamas is only expected to be indirectly affected by Hurricane Florence, which will generate large sea swells in the country, particularly in Abaco, Eleuthera, and Cat Island.

Yesterday Chief Meteorologist Basil Dean said sea swells could be as high as 18-20 feet, warning beach-goers and mariners to stay out of the waters until conditions begin to subside tomorrow.

He also noted the Glass Window Bridge in Eleuthera will "certainly be impacted," and asked residents and motorists to cease using the bridge "until conditions subside."

...but will they spend any money??

Should think anything they spend will be a plus in these difficult times........

wowee they got robbed you get nasty dirty Nassau instead of civilized Bermuda...they probably won't get off the boats!