Longline Fishing ‘Must Not Be Allowed’ 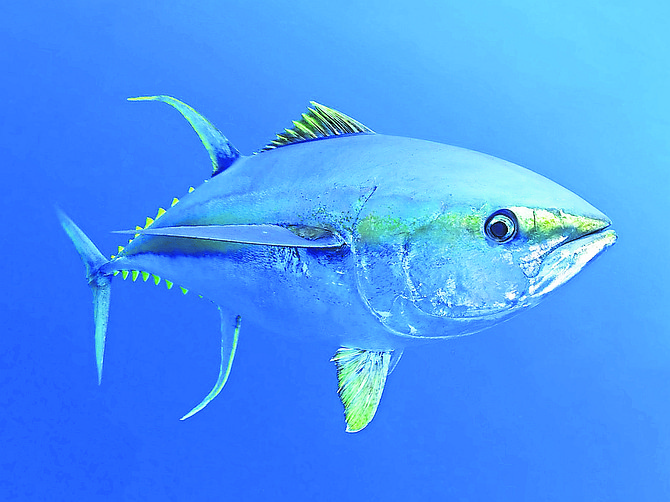 THE Bahamas National Trust is strongly opposed to the introduction of longline fishing within the country’s economic exclusive zone - a destructive practice it warned that could change the Bahamian way of life forever.

BNT Director of Science and Policy Shelley Cant Woodside explained that while the Trust was open to exploring the possibility of developing sustainable pelagic fisheries for commercial fishermen, it would not support any legislation that allowed such a devastating practice.

In her statement, she noted comments made by Minister of Agriculture and Marine Resources Michael Pintard, stating the intent of his Ministry and the Department of Marine Resources (DMR) to explore expanding commercial fishing to species such as tuna.

“The BNT is aware that many pelagic species are already being fished daily in Bahamian waters and has not taken a position opposing Bahamian fishermen targeting these fish,” the statement read.

“What the BNT has raised with the Minister and DMR officials are concerns regarding the use of unsustainable and destructive methods. The BNT is aware that there are persons advocating for the amendment of Bahamas fishery legislation to allow for longline fishing. This practice is known around the world to have devastating effects on marine resources.

The statement continued: “The BNT would not necessarily stand in opposition to commercial fishermen exploring the feasibility of developing sustainable pelagic fisheries, but we are emphatically opposed to the establishment of a long-line fishery within the Bahamian Economic Exclusive Zone.”

Longline fishing is the use of hook and line gear that can have thousands of baited hooks on lines which extend many kilometres (km) from the vessel. Long lines can be used to fish Pelagics near the surface using floats, or near the bottom using weights; depending upon the targeted species, Ms Cant Woodside explained.

“Longlining has been responsible for the decimation of fisheries around the globe, resulting in huge amounts of waste, as sharks, marine mammals, seabirds, sea turtles, other non-targeted fish and juveniles end up on the line,” the statement continued.

“This fishing method may not destroy entire habitats when compared to destructive methods like bottom trawling (also known as dredging), but is deemed extremely wasteful and a significant contributor to the decline of marine resources generally.

Among species exploited locally include red snappers, of which there are at least five different species; tunas, four species; mahi-mahi; sailfish; blue and white marlin; and wahoo.

In total agreement with BNT. Long line fishing and its devastating effects on all manner of marine life must remain totally banned. Who would actually POLICE large scale commercial fishing of the pelagic species? Once they're gone, they're gone.

Well maybe the National Trust should get up to date with times and form an armed Wildlife & Habitat Law Enforcement Team, with jurisdiction to monitor and safe guard our various preserves and charge persons in connection with expired hunting licenses, hunting and fishing offences etc. This can also help to assist the Defence Force in these Areas since they are so weighed down in the look out for illegal immigrants and poaching in our water off land. Maybe the BNT can help to enforce inland and inter coastal water passages, lakes, blue holes etc. I dont know just a thought. Just as America does in the enforcement of good hunting & fishing practices in various zones and sanctuaries...

If China wants longline fishing here they will get it. Both FNM & PLP governments always bend over to pick up the soap.

China likely wants this to be a part of Bahamas WTO membership. Who else will pay for the expensive boats? Deep state China intereference. Calling shots. FNM puppets. Full disclosure required.

Your PLP brought the Chingrets here Freddy.... just like our Indian population....

If longline fishing is a stupid and dangerous thing to do, rest assured for the right price it will happen. That is the governments MO!

Does anyone even remember the Alfred Gray letter a mere 2 years ago? Man, Bahamians have short memories. FNM picking up where PLP left off (no change!!!). See below:

On Wednesday, the daily published a letter from Mr Gray dated October 3, to the ambassador about the issue.

The proposal reportedly projects a $2.1 billion injection into the local economy over ten years through an equal partnership between Bahamians and the People’s Republic of China. According to the report, the proposed partnership will entail the incorporation of 100 companies, with the agricultural products and seafood to be used for local consumption, and exported to China and the United States for sale. The proposal also reportedly includes the option to lease 10,000 acres of Crown land in Andros.

Methods and foreign Fishermen = Not 1 single foreign license should be granted and also can we throw a Tennyson Wells clause in?? No politicians or their wives owned business can get commercial fishing licenses either - these fools think they can do whatever they want and are alone responsible for destroying more environment then any other single entity in our country.

This seems to be an already dealt with story from years ago where years ago some Bahamian longliners vessel had caight some trained sharks in Stuart Cove and damaged coral reefs....with the end being ....no more long ling licenses ...unless with the permission of the Governor Genersl....??

so they band pastic bags to prevent pollution, but add plastic fishing lines, which is even worse?

see, it is too hot hot to march.

A couple of weekends ago a friend of mine brought a buoy back to the boat she had picked up on a north side island beach which she wanted to keep as a porch decoration. On closer examination this turned out to be a long line trot line buoy, complete with terminal tackle minus hooks. Could be left over from the Tennyson Korean fishing boat days but I doubt it.