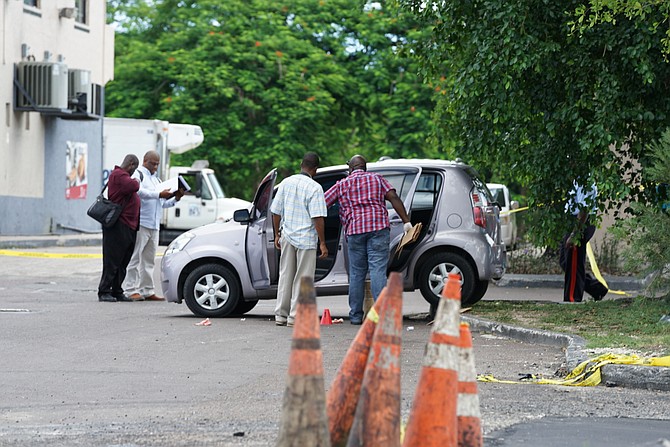 Police at the scene on Monday.

A PRISON officer foiled an attempted robbery when he shot the suspect outside a banking establishment on Prince Charles Drive yesterday afternoon.

According to reports, a man was driving a suspected rental vehicle while a second man attempted to steal a “money bag” from a local security company worker as he approached the Royal Bank of Canada branch to make a deposit.

A Canine Unit from the Department of Corrections was parked nearby, and onlookers reportedly beckoned to the officers to assist.

As one suspect escaped into the bushes, his accomplice “sped off towards the officers”, according to Chief Superintendent Solomon Cash.

The officers “discharged several rounds” at the driver, who was shot in the shoulder, according to witnesses at the scene.

The injured suspect was transported to the hospital by ambulance while the second is still at large.

The victim was unharmed during the incident and several deposit bags were recovered by officers at the scene.

“[He] arrived at Royal Bank, Prince Charles location. As he pulled near the bank, he was approached by an individual who came from a champagne coloured (Toyota) Passo vehicle which was parked right next to the bank.

CSP Cash said: “This individual approached him in a threatening manner (and) snatched all of the deposit bags from his person. In doing so, there was a Canine Unit from the Department of Corrections in the vicinity at the time of the incident.

“Concerned citizens beckoned to that vehicle, pointing out to them the suspected vehicle that both individuals got in that snatched the deposit bags.”

“The officers, they came from their department’s vehicles and they walked towards the vehicles where the suspected persons were in. As they did so, the driver of that vehicle sped off towards the officers,” CSP Cash continued.

“The officers, being in fear of their life, produced their service pistol and they discharged several rounds at the driver of that vehicle, subsequently shooting (that) suspect.

“We also were told that there was a second suspect who escaped from the vehicle and ran across Prince Charles and nearby bushes.”

CSP Cash could not confirm whether the suspects were armed, saying: “I was told that one individual had an object in his possession which resembled a firearm.”

According to Police Press Liaison Shanta Knowles, the suspect is in stable condition and “under heavy guard” in the hospital.

Following the incident, a series of videos were released on social media of the suspect as he hung out of the Toyota Passo with blood draining down his arm.

The man appears to be leaning on his bloodied forearm, which could be seen touching the ground while the rest of his body remained in the vehicle as an officer stood nearby.

Responding to rumours that there were three perpetrators, CSP Cash said he was told there was “only one” escapee.

These reports were corroborated by a security officer who witnessed the incident. He described the suspects as “two young men” who were armed and began shooting during their struggle with the victim.

The security officer told The Tribune that as the victim got out of his vehicle, “two men walked up to him, yucked the bag, pull out gun.

“That’s when they start shooting,” he added.

A second witness, identified as Mr Johnson, could not confirm whether the suspects had a gun. However, he told The Tribune the injured suspect was shot inside the car as he was trying to escape.

Noting the investigation is still in its early stages, CSP Cash could not say whether all the money was recovered nor how much it was.

CSP Cash also revealed the suspects were driving what appears to be a rental car with disguised licence plates.

“So from that we suspect this vehicle may be a rental vehicle and they defaced it so it can look as if it’s a regular vehicle driving through the community.”

“But I would also want to say to members of the public and also persons in security business who have the task of making deposits for various businesses, to be cognizant of their surroundings.

CSP Cash said: “Always look about your surroundings, where you’re making these deposits. Because people could be around just lurking. So you need to be on your P’s and Q’s, as to any suspicious behaviour, any suspicious vehicles.

“But again, like I said earlier, chances are you may not have suspected this vehicle to be occupied by suspected criminals, given its appearance.”

Good work, too bad the officers 'missed' the mark, but let this be a lesson to thieves.

So this "Security Company" was unarmed and only had one guy doing deposits!!!

I'd say proper security protocol (one lookout) more than a gun, Officer Blatch had a gun but he was killed