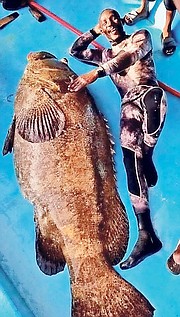 A picture of the Goliath grouper on social media.

ALTHOUGH environmentalists warn against the catching of Atlantic goliath groupers, Agriculture and Marine Resources Minister Michael Pintard has said changing the status of the fish is not currently a "priority".

These remarks come after a viral social media video showed fishermen catching the massive fish, also known as a "jewfish".

Two vessels are featured in the video. The recorder is on the larger boat, filming the two men on the smaller vessel as they pull the speared fish alongside the larger boat.

"It's a jewfish they just spear," one observer can be heard saying. "Five hundred-pounder."

"That's a monster," a bystander says. "This thing still swimming you know…You gotta brain shot him. Head shot him right in his head and kill him dead."

The group hoist the fish onto the larger boat, where it can be seen flopping on the deck. One man repeatedly whacks the fish in the head with a piece of wood.

She noted the fish is recognised as a "critically endangered" species by the World Conservation Union.

"While not currently protected by law in The Bahamas, they are very rare and we strongly advise against catching them," Mrs McKinney-Lambert wrote.

"Goliath groupers are totally protected from harvest in US state and federal waters. Photographs can be taken, but only during the active act of release. Photographs or any other activities such as measuring the fish should not delay release in any way.

Mr Pintard told The Tribune the fish is currently not protected, adding a marine species can only receive such a designation after consultation with stakeholders. He said Goliath groupers are "not regularly seen in The Bahamas" and thus are "not fished with great regularity".

"And none of the fisheries officials I spoke to (are) aware of it being harvested in any large numbers," Mr Pintard said. "And I think you could gauge by the reaction (in) the video that it was a shocker for those guys who appeared to be in the business."

Mr Pintard said the Goliath grouper is not a "priority", anticipating species such as the Nassau grouper and conch will "dominate the discussion".

Concerns regarding the Nassau grouper include grouper stock and fishing locations being targeted by Bahamian fishers, American sports fishermen, and Dominican poachers. Of particular concern are the harvesting of young groupers and child-bearing grouper.

He said: "We still have concerns about the way in which and the extent to which conch is being harvested, and therefore wish to have another round of consultation with stakeholders on that. Those will take priority over discussion of the Goliath fish."