Testing The Water On Helping Our Hospitals 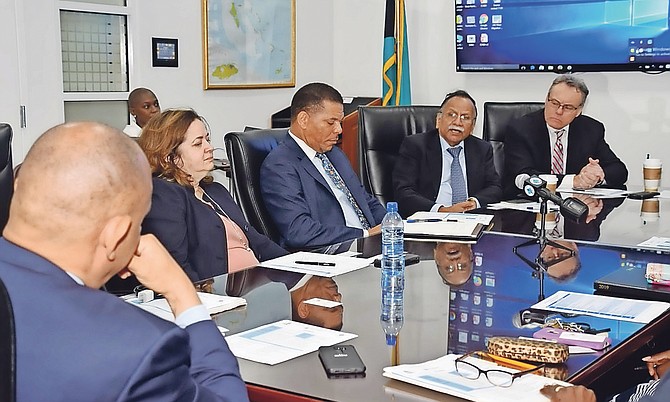 THE preliminary talks between Johns Hopkins Medicine and local health officials continued over the weekend, with the president of the institution’s global ventures scheme touring several facilities in New Providence.

Dr Mohan Chellappa led a team of representatives to the Bahamas, where they toured Princess Margaret Hospital and several clinics.

Speaking with The Tribune following their visit to PMH, Dr Chellappa said all discussions have been focused on establishing the needs of the Bahamas, while seeing first hand the potential of local facilities.

He said, moving forward, there will be collaborative discussions on ways to augment the quality of healthcare being delivered in the Bahamas.

“We are essentially looking at increasing the way we can help the capacity building and areas of patient safety and other processes that will improve the overall quality of care here,” he said. “We saw some areas that need a lot of attention — the ICU, the paediatric units and the emergency room. But there were also areas that we saw that really impressed us — the medical and surgical areas — which are very good.”

Dr Chellappa added that once all of the needs have been documented, more specific consideration can be given to moving talks between the two sides forward.

In addition to their various tours, the Johns Hopkins team also held discussions with other key community stakeholders, including several union bodies. The US charge d’affaires Stephanie Bowers is understood to have taken part as a guest during the Johns Hopkins visit which included a welcoming dinner followed by discussions with Health Minister Duane Sands and a number of public hospitals officials.

In a statement yesterday the Public Hospitals Authority said the talks “focussed on possible opportunities for collaboration with the PMH and Ministry of Health on initiatives that will result in long-term improvements to health care in the Bahamas.”

“The preliminary discussion included opportunities to improve hospital services, redevelop community based healthcare and the possibility of raising $200 million to eventually expand the Princess Margaret Hospital campus to include a state of the art A&E/Childrens and Maternal Health Tower.

“Johns Hopkins was invited by Mr Robert Carron, Deputy Chairman of the Public Hospitals Board of Directors, who helped to facilitate discussion of partnership with an organization possessing the wherewithal, experience, talent and resources to elevate the operations, infrastructure and environment of the public hospital institutions of the PHA.

“Discussions also included an opportunity for initiatives to enhance public clinics across the country into branded primary care/urgent care facilities promoting greater access to quality care for communities throughout the Bahamas.

“A key benefit of partnership will be the opportunity for public health and clinical training for staff through world renowned institutions such as the Hopkins/Bloomburg School of Public Health and the United States Institutes of Health.

“These initiatives would enhance the Bahamas’ capacities to prevent, manage and treat communicable and non-communicable public health issues improving the health of Bahamians.”

In February, it was first announced Johns Hopkins Medicine had an interest in exploring the merits of a strategic health services agreement with the Bahamian government to create a Caribbean Centre of Excellence to transform the delivery of healthcare in here.

Calling the potential partnership “exciting” Health Minister Dr Duane Sands said consideration of the proposal was in the earliest stages.

Dr Sands, at the time, said a “rough analogy” of the possible partnership would be the Lynden Pindling International Airport, which is owned by the government, but operated by the Vantage Airport Group.

He said there is no timeline for the government to make a decision on the proposal, adding: “It requires review and digestion and discussion and consideration.”

PHA is preparing to begin renovations of the Accident & Emergency Department of the hospital. During the first phase, the front area of the A&E section will be redone, including the drive up onto Elizabeth Avenue. The department itself will be expanded by 50 percent, Dr Sands said.

The government has undertaken the redevelopment of PMH, which would be a $160m to $180m project to be done through a public private partnership, according to Dr Sands.

The government has undertaken the redevelopment of PMH, which would be a $160m to $180m project to be done through a public private partnership, according to Dr Sands.

We borrowed a fortune not too long ago to build the new PMH hospital building, with subsequent borrowings to equip it, and now we find we still have a failed healthcare system and the need to borrow another $200+ million. This is the very definition of insanity. The IDB will lend the money. The Bahamian taxpayers will be on the hook for the new IDB loan. And Johns Hopkins will be paid a fortune in fees for their contribution to another healthcare debacle for Bahamians. And round and round we go as we spiral down the toilet hole. Meanwhile, the few doctors and nurses in the public healthcare system who are truly qualified and dedicated go without adequate compensation and are treated like second rate uneducated citizens. Small wonder so many of them are easily poached by by both public and private healthcare providers in other countries. When Bahamian taxpayers hear the three letters PPP, they need to understand that this nothing but an abbreviation for them being Pillaged, Plundered and Persecuted.

This is positive news! This partnership has the potential to drastically improve our healthcare system. I look forward to this collaboration.

You obviously don't remember that other doctor swindler (now deceased) who was tied to a famous university medical school in Montreal. LMAO