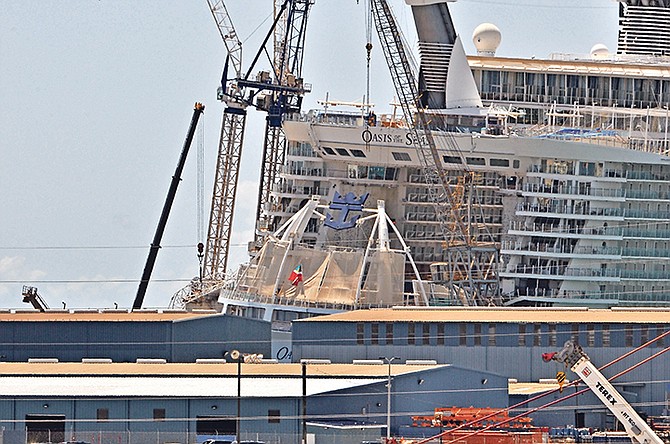 The Oasis of the Seas after the accident on Monday. 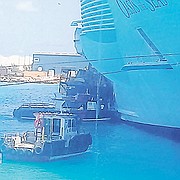 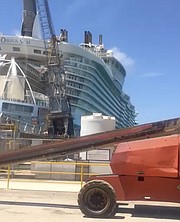 OPERATIONS at the Grand Bahama shipyard resumed yesterday despite the “significant” loss of the site’s largest dry dock, according to officials.

The facility was shutdown on Monday following a major industrial accident involving the collapse of a crane.

The incident resulted in injuries to eight employees, extensive damage to the property’s main dry dock and visible damage to the world’s second largest cruise ship, Royal Caribbean’s Oasis of the Seas.

For their part, Mr Turnquest and Mr Thompson, each of whom toured the property and spoke with officials at the site on Monday, confirmed that operations were scheduled to resume, in part, yesterday.

Additionally, the men also confirmed that three of the eight employees injured in the incident had already been released from hospital, while another was awaiting further evaluation and the remaining workers had been kept overnight Monday for observation.

All of the injuries reported have been classified as non life-threatening.

There were no Bahamians among the injured at the shipyard, which has a large foreign workforce.

Mr Turnquest said the ship involved in the accident, the Oasis of the Seas, has been stabilised and was currently floating on its own.

Royal Caribbean’s Director of Corporate Reputation Melissa Charbonneau, on Monday in a statement to the Orlando Sentinel, said the cruise line was still assessing damage to the ship.

Oasis of the Seas has a passenger capacity of about 6,000, and crew of over 2,000. The Tribune understands that some crew members were on board the ship on Monday while work was being done.

When asked about operations at the facility, the East Grand Bahama MP expressed a degree of concern, insisting property managers had categorised the extent of the loss as “significant”.

He continued: “They have indicated to us that this is a significant loss… this is the primary dock for the cruise ship work that they do.”

To that end, Mr Turnquest said officials had assured him operations at the facility would go on with the two remaining dry docks, with a nearby pier area being made available for use.

He said while there is anticipation for a slowdown in the amount of work the shipyard can manage, operators have committed themselves to maintaining as much employment as possible.

For his part, Mr Thompson said the government had also received assurances from operators at the Grand Bahama Shipyard that all the mandated safety procedures were in place and being utilised effectively at the time of the accident — preventing loss of life and serious injuries.

Despite this, however, Mr Thompson did note an investigation would still have to be carried out to identify the exact cause of Monday’s accident.

He implored members of the public to withhold their judgment until that investigation is formally completed.

The Health and Safety Act which ensures that basic international health and safety standards are adhered to in the Bahamas at all manufacturing and industrial sites is administrated by the Department of Labour.

Addressing the status of his ministry’s involvement in Monday’s accident, Mr Foulkes yesterday confirmed three inspectors from the Department of Labour’s Grand Bahama office had visited the site and were briefed following the incident.

He said following that briefing, he communicated with those inspectors via telephone, but was still awaiting a full report.

When asked if he was satisfied with the safety regulations employed by the Grand Bahama Shipyard at the time of Monday’s accident, Mr Foulkes declined further comment, citing a need to see the report being compiled by inspectors in Grand Bahama.

Apparently human error led to the accident. Or lack of proper maintenance.