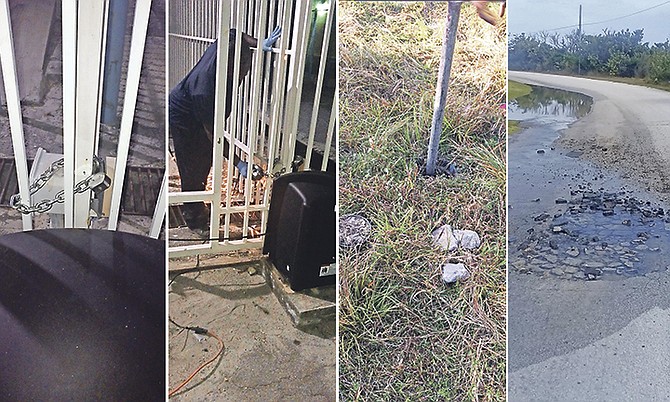 Some of the photographs the Water and Sewerage Corporation has handed to police.

The Water and Sewerage Corporation has handed video footage to police relating to the spate of water supply shut offs in New Providence last week along with a list of all staff who were in possession of valve keys.

Yesterday, a reliable source confirmed to The Tribune the footage depicts both vehicles and certain suspected WSC personnel who “might be known to the public” engaging in “questionable activity”. The recordings are WSC video footage as well as CCTV footage from buildings in areas that were impacted. The footage shows a truck “known to the corporation”, as well as other vehicles, the source said.

In a statement released on Friday, WSC also said it would be “giving the police a list of all persons who were in possession of valve keys to assist in their investigations.”

“Going forward, the use of valve keys will be more strictly controlled and monitored,” it said, adding additional security measures are being implemented including the hiring of private security for its major pumping stations and the use of “concealed cameras and other technologies” to bolster the current alarm system.

When contacted by The Tribune yesterday, Bahamas Utilities Services and Allied Workers Union (BUSAWU) President Dwayne Woods said the union must stand with its membership but reiterated his earlier sentiments that the union does not “condone wrongdoing”.

Mr Woods could not confirm how many employees have valve keys, adding this falls outside his portfolio.

However, he noted: “The majority of the employees are union members. And they either belong to my union or the manager’s union. And then some of them could be agency shop — a very minute amount.

“The union has to stand by its membership and my first statement would be, the union don’t condone wrongdoing,” Mr Woods said.

“And I’ve already made the statement that should anybody be caught in that position or any culprits, we support the culprits being brought to justice. But we don’t subscribe to the philosophy that the chairman is saying, you know, is alleging.”

Tensions between WSC and its two trade unions, BUSAWU and Water & Sewerage Management Union’s (WSMU), exploded last week as an industrial dispute escalated into allegations of sabotage and threats of lawsuits.

On April 2, both unions demonstrated outside WSC’s headquarters in what was termed a “withdrawal of enthusiasm”.

The two groups openly decried what they suggested was the unfair suspension of an employee on April 1 for five days without pay due to an “unwritten and unknown policy”.

According to Mr Woods, the issue was that the union member purchased a vehicle from abroad and parked it in WSC’s lot the previous Friday. Because the car’s battery died, the employee was forced to leave in the lot over the weekend — which “resulted in a five-day suspension without pay”.

Mr Woods also called for the removal of WSC Executive Chairman Adrian Gibson. The action was followed later that evening by an extensive shutdown of water supply across the capital.

Mr Gibson pinned blame for the shutdown on the union, suggesting the act was deliberate and in-line with actions to “sabotage” the efforts of WSC. However, at the time Mr Woods said his union does not condone sabotage and would assist with any investigation into the matter.

WSC directly addressed both the suspension and sabotage issue in Friday’s statement.

“The suspension arose from the use of the corporation’s plant (per the industrial agreement and corporation policy) without permission and from a determination that the account relayed to the GM—when contrasted to CCTV recordings and reports by security officers—was less than honest,” it says. It also noted the chairman was not present during that meeting.

“Upon consultation with the board, the chairman directed the GM to reduce the earlier suspension by 2 days. This was thereafter communicated to the Department of Labour.”

Regarding the sabotage, the statement says: “WSC is the sole local manufacturer of the valve keys. The valve keys are made on site at WSC and can only be accessed by WSC personnel. We have directed the GM to request all staff in possession of valve keys to turn them in.

“Moreover, the corporation will be giving the police a list of all persons who were in possession of valve keys to assist in their investigations. Going forward, the use of valve keys will be more strictly controlled and monitored.

“The corporation’s sewer stations/lift stations were also tampered with and fuses were removed from control panels, which prohibited the start-up of pumps and thereby resulted in sewerage overflows.

“Additional controls/policies are being implemented relative to the control room; the hiring and assignment of private security to the major pumping stations; and heightened monitoring of valves including the use of concealed cameras and other technologies, which would complement the current system of alarms.”

“Much like previous issues, the corporation does not make baseless accusations against employees to instill discipline upon them. Any disciplinary action usually follows a period of internal and/or external investigation and deliberation. President Woods cannot honestly state otherwise.

“In the wake of the forensic audit, we are (making and have made) various staff adjustments and transfers and will be addressing additional issues in short course. We will speak more on these changes in the coming weeks.

“We have also implement new policies and strategies relative to corruption, procurement, disclosures and any other business dealings with WSC.”

The statement added: “There are no major grievances that either union has with WSC. The only matters currently on record related to Mr Woods in his personal capacity and concern him not coming to work and enjoying salary and benefits of approximately $60,000 per annum. The salary was not paid last month as the board determined to end the discretionary administrative leave.

“Mr Woods, as of January, determined to file suit in the Supreme Court. We await the court hearing date on May 3. Notably, both unions have a five-step grievance process included in their industrial agreements. Neither party should breach these agreements, though we note repeated breaches of the industrial agreements and what are overt efforts to engage in the chairman and executive management in a public forum.

“The corporation has resultantly filed several trade disputes, which will also be a topic of discussion on Monday (today).”

Guess who's on the board of W&S Corp. and then ask yourself why wasn't Dwayne Woods fired a long time ago? And then ask yourself why our tired hack of a labour minister, Dion Foulkes, worships the likes of Woods at W&S Corp. and that other buffoon of a union leader at BPL, namely Maynard?!!! Foulkes himself is indirectly a very big part of the sabotage problems our utility companies have with the union goon squads

These labour unions, their bosses and their members have long gone from the lazy and self-entitled to the corrupt and criminal. It is high time they and their nefarious activities are curtailed and prosecuted by a non-corrupt CID unit and court (if such even exist).

the phrase "wrong doing" was coined by politicians as a means of masking criminal offences as simple missdeads.

when you hear the phrase always consider what actions they are speaking about.

its helpful to consider what they would call the same actions if they were committed by you or I.

anyone notice the systemic moral decline all across the western world, if not the whole world.

who knows why, but it spans all of society from top to bottom

So what became of the investigation of the FOUR BPL fires? To frustrate the masses and overcharge them for light and water..an organised affair.

How come no PLP comments on this one? The silence speaks volumes.

These unions make me sick!