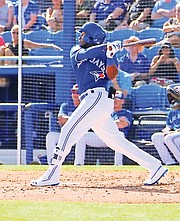 Chavez Young continues to progress through the ranks in the Toronto Blue Jays organisation and opened his 2019 season with a promotion.

Young was assigned to the Dunedin Blue Jays of the Florida State League in Class A-Advanced.

Young made an immediate impact in his debut series with the club and helped them to a 3-1 record over the Clearwater Thrashers. He hit .333 with an .833 OPS, six hits including one double and one triple, four runs.

In game one, Young finished 2-5 at the plate with one RBI and scored one run in an 11-2 Blue Jays win. He singled in both the fourth and six innings as Dunedin rallied to pull away. In game two, he followed 3-5 (triple), with one RBI and scored two runs in a 7-3 win. After strikeouts in his first two appearances, Young singled in both the sixth and seventh innings followed by his RBI triple in the ninth inning.

The Threshers prevented the sweep with an 8-3 win in game three but Young was still productive for the Blue Jays at the plate on the night, 1-4 (double) and one run scored.

Young was listed as the Toronto Blue Jays' No.23 prospect in the preseason and the franchise's farm system was listed as No 5 overall.

"A switch-hitter with different profiles on each side of the plate, Young projects to hit for more average as a lefty. He'll demonstrate an advanced approach from that side, with a swing that produces line-drive contact across the entire field.

"His right-handed stroke is more power-oriented, but it also comes with natural swing-and-miss tendencies. He'll draw walks from both sides and generally gets on base at an above-average clip, while his above-average speed makes him a menace on the basepaths," his MLB Prospect analysis said.

"Much of Young's future value is tied to his ability to stick in center field. He's a solid, if unspectacular defender up the middle, with good range and instincts, as well as arm strength that's among the best in the system and allows him to profile in right field. He saw near equal time at both spots last season, recording 15 outfield assists overall."

Young's standout season last year made such an impact on the Blue Jays organisation that the front office immediately recognised him as one of its rising stars.

Blue Jays General Manager, Ross Atkins noted Young as one of the most impressive minor leaguers in the team's farm system.

Atkins called Young "a prospect who doesn't get talked about enough" following a season where was the only player at any minor league level to compile 50 extra base hits and more than 40 stolen bases.

It was a season of milestones for the 21-year-old outfielder as he was named a Midwest League All-Star.

Young finished tied for second the Midwest league total bases, second in both doubles and triples, tied for third in stolen bases and his 134 hits ranked sixth.

Defensively, playing in centre and right field, he totaled 15 outfield assists along with 290 putouts and a .984 fielding percentage.

"I know my work ethic. I know how much hard work I put in over the offseason. I'm always trying to get better," Young told Sportsnet.ca. "I'd describe my game as effectiveness. Like, what I do, it affects other players. Being energetic, being a good teammate, bringing a winning attitude. I just come in and try to be myself. And try to impact this organisation as much as I can."