The Alicia Wallace Column: What’S In The Message Is Most Important Thing

The tension between Joy Behar, left, and Meghan McCain was obvious.

I remember being told, over and over again: “It’s not what you say. It’s how you say it.” Hearing it now brings back memories of being told my delivery was more important than the message. Though I have learned the importance of considering the audience, I still rail against tone policing and the dismissiveness that meets nonconventional delivery that defies neocolonial norms.

There is a reason communication is a skill. We may know how to read, write and speak, but that does not necessarily mean we are effective communicators. While styles of communication differ, the success of a verbal or nonverbal interaction is determined by the outcome. No flowery language, gesticulation or volume can guarantee the desired outcome. Communication is not only about content and delivery, but timing and target. Are you engaging the right person? Is your content relevant at this moment? Is the other person in a position to give you the attention you need? The readiness of the receiver is just as important as that of the sender. Similarly, context and perception are critical. You, as a communicator, have to be aware of the way your message is received. You have to control it.

On Monday there was an uncomfortable segment on The View. The discussion was about the resignation of Kirstjen Nielsen from the Department of Homeland Security. Meghan McCain spoke about immigration and her position that there is a border crisis in the US. Joy Behar said there is a need to put attention and resources into helping people in the countries being fled. McCain, disagreeing, interrupted Behar who then said: “I listened to you. Lemme just finish.” McCain retorted: “Yeah, part of your job is to listen to me.”

It is not unusual for the hosts of The View to disagree, but the tension between Behar and McCain is obvious. The composition of the people around the table is designed to ensure a range of perspectives are expressed — not to create a battlefield. This particular exchange between Behar and McCain has drawn attention and sparked a discussion that, unfortunately, has not gone beyond the incident itself. There is more to dissect than two people’s attitudes toward one another or the lack of professionalism of one toward the other. It is important to look at the immediate response to the conflict.

Whoopi Goldberg interjected quickly, steering McCain and Behar away from a petty argument. She firmly said that would not happen at the table, adding: “We don’t need to comment if we don’t like what we’re hearing. Just let folks talk.” By this point, Behar had already forgotten what she was going to say and was visibly put off.

We are constantly having difficult conversations. We disagree, we struggle to even find our points of departure, and we often resort to personal attacks instead of strengthening our own arguments by listening to the other side and asking ourselves why we stand where we do. When someone becomes exhausted or convinced there can be no agreement, they say: “Let’s agree to disagree.” This is, essentially, what Goldberg suggested. No need to belabour the point. Say your piece, let other people say theirs, and resist the urge to engage further. There are obvious problems with this approach.

While it may be, to a certain extent, necessary on a talk show with short segments, this approach does not get us very far. We do not make progress when we give our positions, listen to the others and walk away. Someone has to shift. Negotiation has to take place. The work is in figuring out how we do that. Anything else is just talkin’ for talkin’ sake.

We don’t need a sham consultation

The government is talking about making legal changes regarding immigration again. The Law Reform and Revision Commission drafted the bill which includes clauses on deprivation of citizenship. Immigration is always a hot topic and quickly becomes synonymous with managing the Haitian population. We celebrate any attempts to reduce the number of people who can access Bahamian citizenship, ignoring the fact many people are born in The Bahamas to non-Bahamian parents, but grow up, live and work in the country anyway. Making their lives difficult does not make sense. Excluding them does not make sense. Treating them and talking about them as though they are parasites is ignorant. The government seems to takes it cues on immigration from us rather than human rights standards and its international agreements.

One part of the discussion that has been missing over the past few days is the consultation process. It was recently reported that Minnis would listen to organisations’ feedback on the proposed legislation. It seems the current administration is continuing to approach legislative reform in the same old ways. Organisations and advocates should not hear about such changes at the end of the process, but be involved in various phases. Anyone who pays attention to the news knows the organisations and individuals with interest and expertise in immigration. They should be invited to consult, making contributions as representatives of the communities they serve. By attempting to pass and amend laws without a truly consultative process, the government only widens the gap between itself and citizens, reduces trust and feeds the us versus them narrative.

The government needs a proper communication strategy and it needs to include consultation with civil society. Citizens have a wealth of knowledge and insight, access to community members and tools to facilitate collaboration. These resources can be better utilised when their expertise is recognised, called upon and respected by government officials. Communication includes the message, mode of delivery, timing and the way it is received. We all need to be more intentional in our engagement, holding the desired outcome as a guide. 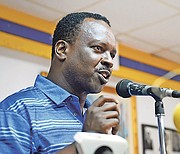 Questions? Never mind that - look what we did

Former Minister of Youth, Sports and Culture Dr Daniel Johnson has taken great exception to suggestions of impropriety on his part resulting from the recent Auditor General’s report on the National Sports Authority. Prime Minister Dr Hubert Minnis said he would forward the report to the Commissioner of Police for further investigation. The main part of the report being debated is the payment of $1.1m for services that allegedly were not rendered.

On a radio talk show, Johnson sought to clear his name. He emphatically stated his defence and support of his team. While the host tried to delve into the issue, noting the limited time available, Johnson insisted on slowing down and framing the conversation the way he wanted. The host’s questions did not get direct answers, drawing lengthy explanations of context, praising his team and referencing the “Sports in Paradise” brand.

Context is important. Information is received differently when that context is clear. Johnson certainly understands this, but did not demonstrate the ability to give direct comprehensive responses. In addition to constituently referencing his vision that “not everybody could see”, he outlined the achievements of his team in negotiating with international bodies and bringing sporting events to The Bahamas. The major issues with his responses were length, focus and demeanour.

I could not help but wonder how the expletive-ridden responses, rife with emotion, would have been received had they come from a woman. Johnson’s comments have largely been regarded as funny. He is excused because of his passion and empathy for him in his fight to protect his reputation. It has been interesting to observe the latitudes extended to some while others are expected to comply with a different set of rules. Johnson wisely chose not to throw anyone under the bus, instead highlighting accomplishments, sharing the glory with team members and referencing the young people the country needs to focus on. You could have almost forgotten why he was on the show in the first place. Success?

This waste of time in social reasoning writer. . .she cannot reason out of a wet paper sack. . .stuck in her own little world where she can't reason in a balanced manner. . .esoteric opining, mixed with myopic naivety can only equal moronic syllogism!! A good writer. . .little value as a fair and balanced social commentator. In philosophy we would call her style of reasoning, stochastic. . .with an a-priori bent! In other words. . .no clear position in dynamics. . .but all ways end up at her preconceived "pet" position! Don't get me wrong. . .I am not describing circular reasoning. . .though they are similar. . .the difference between stochastic and circular seasonings is that circular reasoning follows a "rounded pattern" with an apriori intent. . .the other just bounce in no particular balanced pattern. . .the writer just "shoots off at the mouth". . .mixing and matching ideas as he/she goes. . .sometimes contradicting what he/she established. . .hence the moronic profile. . .