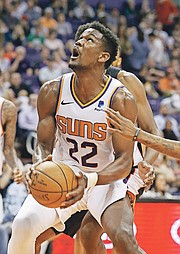 Phoenix Suns centre Deandre Ayton goes up for a shot against the Washington Wizards during the first half of an NBA basketball game last month. Photo: Ross D Franklin/AP

Deandre Ayton’s debut season in the NBA had several milestones and the Phoenix Suns centre established himself as a force in the league for years to come.

He missed five straight games with a sprained left ankle to conclude the season but still set several franchise records.

He finished with 39 double-doubles, a Suns rookie record and No.12 among all players. He also set the Suns rookie rebounding record with 729 boards.

His field goal percentage is the third-highest in NBA history by a rookie qualified for the league leaderboard and the highest by a rookie who is averaging a double-double.

The Suns finished at 19-63, the worst record in the Western Conference.

Ayton was selected as a member of the World Team for the 2019 Mountain Dew Ice Rising Stars Challenge during All-Star Weekend.

He finished with 15 points, eight rebounds and five assists but his Team World lost 161-144 to Team USA.

Ayton set a season high scoring of 33 against the Nuggets on December 29. He set his season high of 18 rebounds on three separate occasions November 2 against Toronto, December 19 against Boston and December 23 against Brooklyn. He recorded three blocks nine times and six assists twice.

During the off-season, Ayton’s first impression on the NBA landscape produced his first league-wide award when he was named to the 2018 All-NBA Summer League Second Team.

Ayton led the team with 14.5 points, 10.5 rebounds and one blocked shot per game while shooting 59.5 percent from the field as he was one of just seven players in the Las Vegas Summer League to average a double-double.

When the Suns selected Ayton with the first overall pick in the 2018 NBA Draft, it represented a historic moment for Ayton, the franchise and The Bahamas.

With Ayton’s selection, The Bahamas joined the United States, Canada, Nigeria and Australia as the only countries with multiple No 1 overall NBA draft picks.