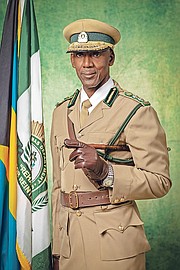 He was identified as the successful candidate out of nine applicants after the post of commissioner of correctional services was advertised both locally and abroad last year. He succeeds former Commissioner of Correctional Services Patrick Wright who officially retired on August 29, 2018. An official handing over ceremony at BDCS will take place on Monday.

“I am pleased to appoint Mr Murphy as commissioner of correctional services,” said Mr Dames. “He has an impressive professional record having served for nearly four decades and will lead the process of transformation at the institution.”

A native of Mayaguana, Mr Murphy began his career at then Her Majesty’s Prison on August 11,1980 as a prison officer and was awarded the coveted baton of honour as the most outstanding recruit in his squad. His career steadily progressed over 38 years from corporal in 1993 to acting commissioner in 2018.

Same old stuff as the former PLP government. Not a damn thing changes with the appointment of just another 40 year comrade junkie - but the changing of the colours t-shirts. Yeah, no?