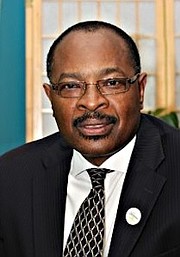 AMID opposition claims of political collusion, Auditor General Terrence Bastian yesterday told The Tribune he only wrote the facts in his report on the National Sports Authority.

Mr Bastian did not directly address accusations leveled by the Progressive Liberal Party and former Sports Minister Dr Danny Johnson, but expressed full confidence in the work conducted by his department.

Acknowledging it was not the first time an audit report has faced criticism in recent years, Mr Bastian said he longs for a time when the work of his department would be viewed impartially as the law intended.

“I try not to make statements that will create issues and tensions,” Mr Bastian said. “That’s why I write the facts. I don’t go no further than that. It’s always when you write it, someone may think it’s a political statement but if it’s a fact then it can’t be political. I write what we find and if we are wrong then I’d be the first person to admit that we were wrong.”

He continued: “Hopefully the day will come when whether its the FNM, or the PLP, or the DNA, that these reports will not be taken as political. My job is not to make any political statement. We don’t do that, my job is to be a public trust and let the public know our findings. I don’t write my opinion, I write the facts simple.”

The NSA audit tabled last week covered the operations of the authority from July 2011 to December 2017 and revealed the authority’s financial allocation increased by more than $3.3m during the election fiscal year.

It found that one company received more than $1m in taxpayer funds, but did not complete any of ten deliverables promised to the NSA.

Mr Bastian further highlighted irregularities in the payment of employees, an “unusual” handling of petty cash, and stated the organisation’s accounting practices had apparent weaknesses and did not fully comply with regulations.

In its wake, Dr Johnson suggested the department did not do a good job, insisting that “every penny” could be accounted for, and further made reference to a “petty, jaundiced, unprincipled, evil and destructive” agenda.

For his part, Progressive Liberal Party Chairman and Senator Fred Mitchell said the Office of the Auditor General’s reports commissioned by the FNM were “never what it seems”.

In his report for the 2012-2013 fiscal year, the previous Christie administration’s first year in office, Mr Bastian stated efforts to scrutinise the government’s spending had been “impeded”.

He accused unnamed civil servants of “a lack of co-operation” with his office’s audit efforts — actions that amount to breaking the law — but also resulted in civil servants escaping accountability for “loss or wastage” of taxpayer monies.

That report also reveals that the Office of the Auditor General is under-staffed by some 43 percent - with just 45 staff. The sum is almost 50 percent below the 78 workers Mr Bastian deemed necessary.

According to Tribune Business, Mr Bastian suggested the government implement a real-time, integrated financial management system — covering the entire public sector —as a way to boost accountability in the way it manages the people’s money.

“I believe my report speaks for itself.

“I’m not defending the facts, the facts speak for itself.”

A word of advice to Mr. Bastian: Just do your job and avoid debating the legitimacy of the outcome of your work in public. You must avoid being baited into joining the political fray of the day.

Amen to that. . ..stop talking about this or that. . .LET THEM WASTE TIME TALKING. . .LET THE FNM, PLP OR DNA RUN THEY MOUTHS. . .DROP IT LIKE ITS HOT ON THEY HIPS AND MOVE ON!! That's what his job is. . .spank governments hips for skulduggery with the public purse!! Him talking is not a good move. . ."heen gat nuttin to do" with they politics them!!

@licks2 actually I think it was good for him to speak this one time. We Bahamians can be foolish at times, we are quick to speak without facts. He clarified his position, now hopefully people can stop blaming the messenger and look at the message!

The PLP tried to smear Mr. Bastian while they were in Office ........ PDavis, in particular.

That is why the AudGen Office and the Ombudsman Office should be free of any political encumbrances or appointments ......... This is the only thread of fiscal investigation of the Government that appears to be working now ........ The PAC is dead.