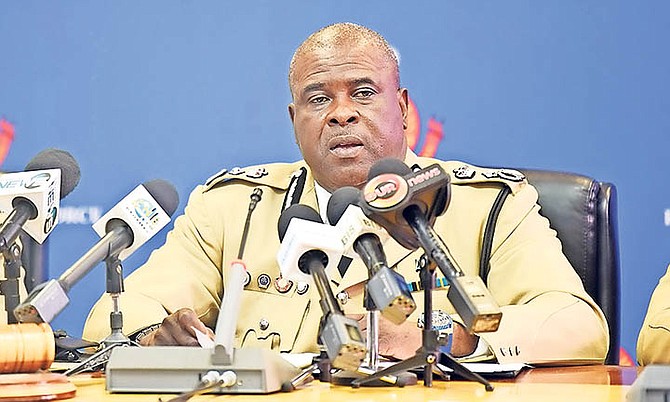 COMMISSIONER Anthony Ferguson’s 2019 policing plan was tabled in the House of Assembly yesterday featuring among other things a reliance on technology to prevent and reduce crime.

Although the plan utilises much of the same strategies from years past, it proposes to use a broad multifaceted approach to disrupt and end acts of violence wherever they occur.

To do this, the police force is planning to focus on crime hotspots, repeat offenders and collaboration with other law enforcement agencies and the community to strengthen crime prevention.

Organised criminal groups involved in drugs, illegal weapons fraud and other criminal activities will also be targeted by police.

This effort will be supported by the optimisation of technology, the plan said.

Body worn cameras and a policy for them will also be created and the same will be done for the Shot Spotter technology that was unveiled recently.

The police also say a real-time crime centre will be constructed. However, no timeline was given for this technological arm.

Closed circuit television will also be utilised and expanded in high crime areas, the plan said.

Additionally, drones are to be used in certain areas.

The plan also says that police will ensure DNA laboratory capabilities are expanded.

An online reporting site or an application for non-emergency offences is also to be developed.

The plan seeks to ensure much of the success achieved by the force in 2018 is repeated in 2019.

Overall, the plan said there was an eight percent reduction in overall crimes when compared to 2017.

The police further clamped down on other offences.

Noting that traffic fatalities increased by 28 percent in 2018, officers will be deployed at strategic check points and problematic locations at peak times, it was noted. CCTV will also be used to ensure order on the street among motorists.

Speed detection technology and increased use of speed guns are also planned for 2019.

Police also want to collaborate with driving schools and increase speaking engagements on road safety in schools and other public forums.

Also, to ensure compliance the plan wants to deploy adequate police resources to all public events in order to prevent and control incidents of disorder or criminal activity.

This priority further suggests there will be a clampdown on night clubs and bars to ensure there remains compliance with the terms of their licences.

The police will also be working along with the Business Licence Unit to ensure the law is followed.

"Additionally, 8,439 marijuana plants were uprooted, 10,292 pounds of marijuana seized." What a waste, or maybe not!

These authorities love statistics, trust they are accurate. Also hope that the Force has sufficient honest officers capable of operating and maintaining all of the wonderful new technology and the funds with which to procure it.

"Police also want to collaborate with driving schools and increase speaking engagements on road safety in schools and other public forums."

If reports that at least 8,000 drivers are operating vehicles with no driver's education and no knowledge of traffic laws and rules of the road, the effort must go even further to ensure that these drivers get some education and proper driving skills. When they commit offenses they should be sent to driving school for two, three, four classes depending on the inftaction. The classes will also highlight the offence. .

More effort to identify and charge and punish persons who are bring illegal firearms into the country. And more education of the dangers of having illegal firearms and illicit drugs. The marijuana may find controvesy as it is now being commercially produced in a number of countries around the world and is already a legal $13 Billion industry. And, of curse, based on police seizures, it is the preferred drug of Bahamians. At the ones being policed.

And of course economic crime must be addressed. Unemployment is still very high, especially among the youth and more so among young males. And when young men are unemployed, there may be more than just he alone depending on his income. And many businesses are shying away from hiring for obvious or perceived reasons. How does one fix this and prevent young men from turning to crime.

And Mr Commissioner make sure you use technology to identity and prosecute jail and deport agents of other countries who are in this country creating havoc crime mayhem and even murder. And then they secretly slip away under the darkness of night. Probably only as far as another island in your country. Only until the time is right to do more of their dirty deeds. They control your media, your government, your food supply, your banks, your armed forces including the police. Your power company your communications companies. How many many items you can add to the list? How many can you strike off?

To hell with your prescription that says 'take one per day'. Take three! Upping the dosage is clearly warranted. LMAO

The highest form of technology that Ferguson and the other brown suit clowns can wrap their heads around is the baton a/k/a billy stick. Besides, these clowns are much too busy wrongfully approving loads of unearned overtime pay for reservists, a good portion of which no doubt works it way back to their own pockets. LMAO