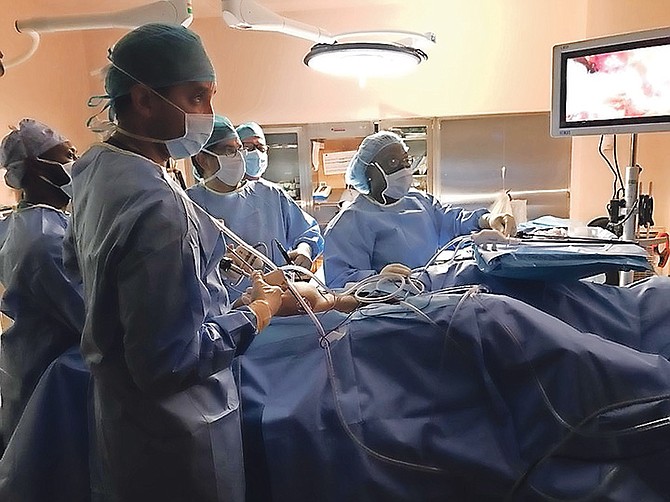 In a post-operative interview with The Tribune yesterday, Dr Pinto described the outcome of the country’s first laparoscopic minimally invasive prostatectomy as a success, noting he performed three such surgeries on Wednesday.

Dr Pinto’s patients were on average in their early 60s, the general demographic of men who face this disease.

“Every [surgery] is a challenge because technically it’s a difficult procedure and every patient is different, particularly when you’re dealing with cancer there are many different variables,” he continued.

“But all of them had excellent outcomes, all of the patients are doing extremely well, sitting [up], walking around. So that’s one of the big advantages, that there’s very quick turnaround, very quick recovery, there’s minimal post-operative pain. So, you get back to your routine, to your regular activities very quickly and in most cases, you’re out [of] hospital the very next day.”

In an interview held with The Tribune on Tuesday, Dr Pinto described this surgery, which he underscores spares the nerves that provide erections.

At the time, Dr Pinto said: “So instead of the open procedure where you’re directly looking at the organ…it’s using keyhole incisions, small tiny incisions with long precise instruments with a camera placed within one of these small incisions.

“And we’re looking up on our 4D high [definition] screen, which is magnified…. There’s no deep cut that requires muscle healing because everything is just a little small keyhole incision.”

He also noted prostate cancer is the most common in the Bahamas and affects one in six men. However, he added it’s one of the easiest to cure if caught at an early stage.

Dr Pinto, who has studied in Jamaica, South Africa, Germany, and India, said it is an honour to return home and have the opportunity to perform these procedures for Bahamians.

He added a laparoscopic minimally invasive prostatectomy is “by far” the most difficult urological surgery, but added he has been performing roughly three a week for the last seven to eight years abroad.

“So I would like to get the same here…I would like to make this a weekly or at least a biweekly event and to make it the new standard of care for prostate cancer treatment, particularly now that there’s going to be National Health Insurance,” he said.